I have lost all interest in cooking, because it is boring and unrewarding and no one eats it properly because they are entitled. I am oft heard to say:

JUST YOU WAIT UNTIL YOU REALISE NOT EVERYONE’S MUM COOKS OTTOLENGHI FOOD LIKE PRACTICALLY HALF THE WEEK YOU LITTLE INGRATES and they are like:

So you keep saying. Where are the biscuits?

It’s very wearying. They sniff disdainfully at my Claudia Roden’s lamb and pear tagine and shove away their lasagne (because of the cheese, the Dreaded Cheese) and choke back tears at the sight of Gail’s poppyseed bloomer (‘those black things are DISGUSTING’), and one kid won’t eat pasta (I suspect as a ploy to help me differentiate him from the others, such is the scarcity of individual motherly attention round these parts), while the scabby-faced Otis prefers crisps and popcorn to actual food and mostly they all cry a bit if they are given carrots. Tonight, kids, do you fancy a little something from Nigel Slater? Weeping. How about the River Cottage cookbooks? Shriek. Honey & Co? Trembling all over.

Vegetable-wise, they accept cucumber and broccoli if there is some sort of dessert-deal to be had afterwards- like, eat the head of these broccoli trees and you can get an oreo ice cream thing, you hard-bargaining uncompromising buggers. They agree to rice and couscous but not quinoa or bulgar wheat, and I’m like WHY? Did you discuss all this in the babies’ waiting room in heaven?

All you anglo saxy babies, hear this: There are certain carbs and grains that just won’t ever be acceptable, even though you will have never tried them before and they are exactly the same as all the other grains and crabs in effect. DON’T TRY THEM. FEAR THEM INSTEAD.

Tonight, I have decided that I will fight against my urge to just eat re-presented eggs at every meal, and have decided to brave the freezing cold and take Otis – the Miraculously-Still Growing Otis who has managed to keep on developing into a normal-sized child on a diet of stolen Halloween sweets and babyccinos – and we will make Jamie Oliver’s ricotta cannolini, which is fiddly but is like diving into a cheese and tomato bubbling pasta lake OF YOUR DREAMS. So I have to go and get creme fraiche which, owing to my hasty spelling and autocorrect is now listed on my phone to-do list under tins of toms and mozzarella as crime franchise. So I am apparently intending to go up to Waitrose to purchase a Crime Franchise. Which would be awesome and more fun than cooking endless rejected meals and tidying up other people’s stuff.

This morning, in fact, case in point, etc etc,  we had a drama because Casper couldn’t find his shoes. There is a place for the shoes, and it is by the front door, and it makes a lot of sense both intellectually and by the laws of common sense and basic physical laws to take your shoes off when you come inside and put them in the massive box filled with black school shoes. Then you know where they are when you are heading out, amiright? But no! NO NONONONONONONONONO nonononononono! Putting them there would be too SIMPLE! Too easy! Too drama-free! What you can do instead, and they frequently do, is to put them behind toilets and under strewn towels and firmly under the couch and behind doors and deep into the dusty dressing-up box and under beds and in the freezer and it’s only ever apparent that one shoe is missing when it is 3 minutes past the time you were supposed to run out the door. And I could even handle this if it wasn’t accompanied with wailing and kicking things angrily and the accusations of sabotage and theft and general malfeasance. This morning was the same, and Casper went from room to room, eyes heavenward, incoherently but loudly cursing his brothers who had DONE SOMETHING WITH MY SHOE and kicking walls and occasionally crying a bit or making some sort of frustrated screaming sound, all of which I ignored except when I couldn’t any longer, and went mental a bit and got all shouty and narrow-eyed and unhinged and told him

and looked under the sofa-cover and there was the bloody shoe ALL A BLOODY ALONG. So we get to school, late, and he turns to me and says

Mum can you please go back and get my cello? I forgot it and I will get a yellow card if I don’t have it

and I say NO. Suck it up, fella. I hope you get a yellow card AND detention, you unreliable shoe-putter-awayer with a potty mouth and a cranky morning temperament with some sort of inability to lift up sofa-covers with suspicious-shoe-shaped lumps beneath.

That’ll learn him. Except, of course, it won’t.

And in other news of the children, one of them had a banding test at the amazing secondary school that he will get into in any case because of the sibling policy. He did a test to determine which group he should be in – A, B, C or D. I was confident he would be ok because he is a mathsy kind of guy, so the strength of that might bring him out of the C and D bands, because who knows what kids lurk in the C and D bands. The smokers, probably. Anyway, he came out of the test, we went off to buy posh bread from the Dusty Knuckle which only Mark and I will eat and he told me that he had to write a book review of a novel he had read. And he said that he didn’t think he had ever read a novel, so he wrote about Gary Larson cartoons.

Here they are, seeing Santa in November: 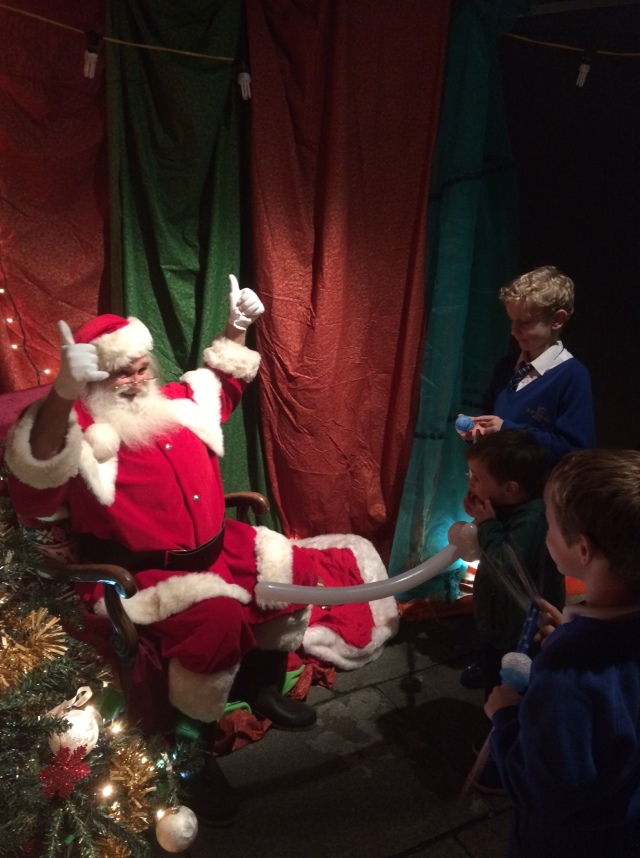 And the smallest patchy-skinned member getting a proper old school haircut from the Cypriot barber:

And another kid, eating artisanal bread for realz: 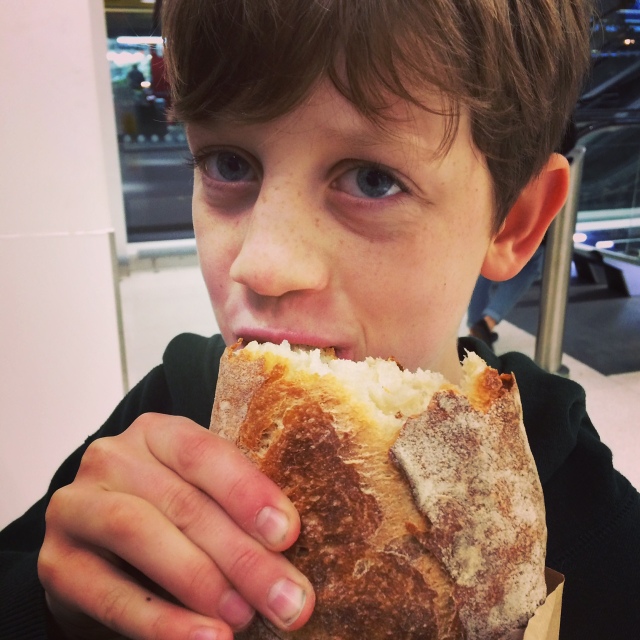