It hurts, because last night we went to Taverna Do Mercado for some sort of port and wine-pairing dinner because it seemed like a great idea for a Tuesday night. GET OFF THE COUCH! Turn off Empire, get some heels on and get down to Spitalfields for some portuguese tapas and unrelenting stealthy wine-refilling from the generous staff. There was quite a lot of octopus and mackerel and cuttlefish on the menu which made me sad, though the chatty Italian woman opposite me was really much sadder because she thought she had signed up for the suckling pig dinner, and to find out that it would be a festival of pig’s ears and gross sea creatures instead of the lovely flesh of the baby pig was clearly a disappointment indeed. So I didn’t want to make a fuss after she made a fuss, because who wants to be that wanker who upsets the set dinner? Not me – so I just told the waitress that while I wasn’t *allergic* to seafood, I just really hated it SO MUCH. Even stock? she asked. Yes, even stock. Though, true New Zealander that I am, I finished my tiny protest by saying actually, it was all fine, because New Zealanders know that complaining makes you WEAK. I assured her I could just pull out the massive bits of repulsive fishy things bobbing about on the shared plates and I could sniff everything first in case of horrifying fishy juice leakage and she seemed satisfied with that.

So I just ate quite a lot of garnishes that may or may not have touched seafood-juice and bits of bread that people gave me because they felt a slightly irritated pity and I tried to get over myself. And of course the never-ending wine was quite helpful for making things feel a bit better. So we went for it and we wobbled home, me on my stupid heels which had worn down to the silver stumpy bit and the babysitters laughed at us and we went to bed a little bit ashamed and now there are minions in my head doing some scheduled roadworks with drill hammers.

This is Gaby, who may or may not have been bored by my winey conversation:

Making things feel slightly worse is that our one remaining fish was bombarded with half a tub of fish food from the heavy-handed Otis a few days ago, and while the fish itself seems oblivious, his water smells like poo and death. I thought it was, perhaps, an actual bit of poo that may have been left under the couch or behind the door stinking up the corner of the living room, because that *can* and *does* happen in our place, but it was just a rotting tank. So I scooped out the fish, the mysterious deathless tiny fish and thought about cleaning the tank but then I thought NO MORE! I hate that fish and his tank and it is going to go to the bins and the fish, the mysterious deathless fish can go and live in the Serpentine. Mark walked in and stepped over the blackened stinking tank and I told him of my plans to release the mysterious deathless fish into the wild and he looked at me with sad eyes and said

And I was thinking – Dude, you kill deer and pigs. On purpose. You were a butcher. You killed sheep and cows in the meat works. Why the sad eyes for the lone fish? He’s a battler, for sure, but he is also boring and personality-less and brings no joy into the family, only decay. Also his tank is not very stylish and obscures our Petra Borner print (apologises for obvious self-promotion here, but it had to be done). So he’s going to go, leaving the nest as it were, just as soon as my head stops banging and the sweats calm down.

Meanwhile, overcome with rotting pears and half-eaten apples, I made a Dorset Apple Cake. This is an example of when rot is #winning: 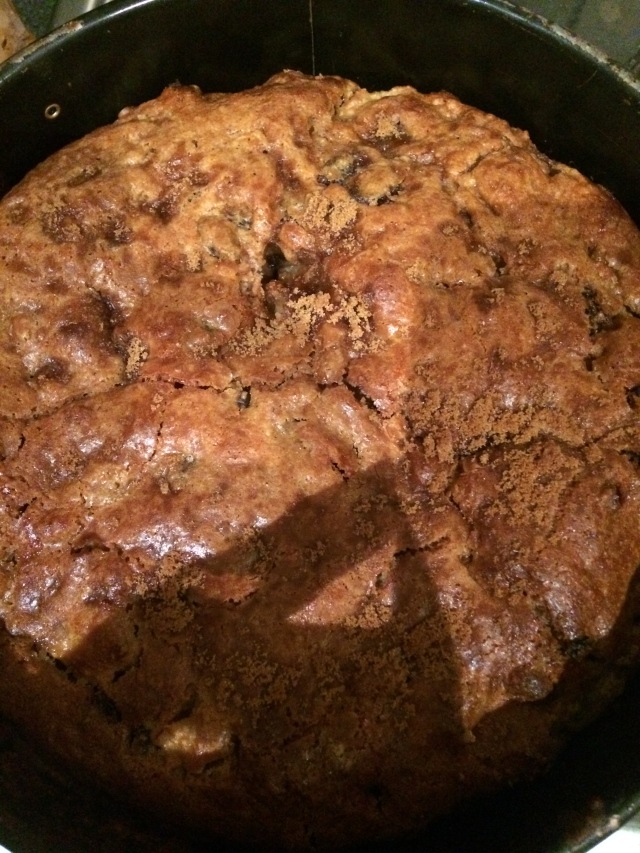 And here is a photo of a cheese truck, with the eldest gulping a hot chocolate on a Sunday-Let’s-Run-Away-From-The-Others date. See the pre-teen ‘tude? It’s going to be harsh for us, having one sulky teenage boy grow into another sulky teenage boy, all wearing hoodies and trying to get away with never washing their hair and with such unrelenting sass coming from their once-baby-mouths:

Anyway, cheese is quite clearly the answer for me in my current state. As is the whole fish disposal thing. Wish him luck in the Serpentine – it’s a tough world out there in the Royal Parks. It’s been real, mysterious deathless fish. Go well.