Here are some things that you MUST know.

There is a small two-storied Paul Smith outlet shop just off South Molton Lane, where you can buy three pairs of stripy socks for £19 instead of £17 PER PAIR, and it is filled with handsome thrifty men buying their Paul Smith puffer jackets and slim-fittin’ trou, so I reckon you could meet a man for a date there, because a Paul Smith man seems to be a decent kind of man, even if a little bit early 2000s-esque. And the very best thing is you can buy the three pairs of socks and give them out to three people for Christmas and it looks like you have been v v v flash with the cash but you haven’t, you’ve been a bit tight. Or, er, fiscally shrewd.  Male teachers, Secret Santa giftees and husbands – sorry for the spoiler alert but it’s too good not to share.

The cleaner has gone on holiday and everything is going a bit wrong. I had an at-home day today, with a vague idea that I would clean things up a bit, and even casually tossed around the idea of changing sheets and stuff like that. I asked my friend Sue today how long you can not change the sheets on a bed, and she said two weeks seems entirely reasonable, because, you know, we are too clean these days, asthma, etc etc and I was thinking ‘what about three?’ and looked at the calendar for when the cleaner comes back and I think yeah, we don’t need dust mite allergies becoming a Thing in our flat. These things are all in the framing, amiright?

I have been wearing a Matalan polyester leopard print coat which sits on the right side of pub landlady/prostitute that smells strongly of a factory and shipping containers and layers and layers of plastic wrapping, but it looks like vintage ocelot. And so I paired it with bronze and silver sequins today, after finding that Otis had been smearing the bathroom walls with some ancient eyeshadow palette which, it turns out, has the most excellent metallic selection, and so I experimented before the school run with the bronze eyeshadows to match my skirt and I was SHIMMERING as I went up the A40 with the dog and my ankle boots and three kids in tow and when I got to school, I was asked WHERE ARE YOU GOING NOW? Like I had some 8:30 disco appointment somewhere, and I had to say that I was dressed a little like a kind, fertile and shining sex worker to go home and try changing some sheets. Reader, I went home in my flammable evening wear and stayed in it all day, through Dorset Apple Cake making and CBeebies watching and after addressing Christmas cards and wrapping up single pairs of socks, occasionally dashing into the hallway loo to try another metallic shade, all of which have Otis baby-fingered-shaped holes gouged into the middle of them. I realise that in order to get good at makeup, you have to just put it on. Not matter the time of day! No matter the appropriateness of the situation! No matter that you don’t know what bronzer is for! Just throw that shizzle on, ladies, until the cack-handed cats-eye flick starts to look alluring, and the blusher makes you look youthful, not drunk, and the metallic eyeshadow looks like how Kate Moss would wear hers.  And then I walked back to school in the afternoon and took a photo, with the addition of a nappy bag filled with dog poo, and thought, my glitter is bringing some Christmas joy into the streets of Paddington. 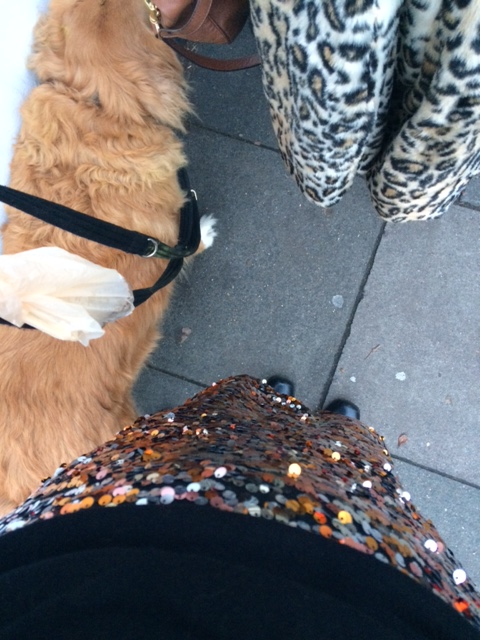 The dog got dognapped today, but I saw the napper and shouted: HEY! THATS MY DOG! THATS MY DOG, LADY!  from across the road, and she was like WHO? WHAT? WHERE WAS YOUR DOG? And I said OVER THERE ON THAT POST! FROM WHERE YOU JUST UNHOOKED HIM! And she was like OH! SORRY! HE WAS ALL ALONE AND HUNGRY! And we look at the enormous, glossy-coated fat dog, lips still shiny from all the chicken carcasses he found on the road on the way to school, with his collar and his look of general content and utter laziness, and I grabbed him back and gave her like the MEANEST stare. And the terrible thing is he was honestly just as happy to be walking along with this stranger than with me. He now looks completely unbothered that he was nearly stolen, and I am thinking he has either a majorly low IQ or is just really over living with us. He didn’t even bark. No signs of residual trauma. He’s sleeping a lot, but then, he is pretty much always asleep so I can’t count that.

This is what Otis looks like after he has also been experimenting with my makeup. Also, he is eating Snack -a-Jacks. This is trashy and shameful, especially when you know that he had just been telling me he wanted to punch me in the face, apropos of nothing:

This is a video of the kids at a trampoline park in Acton. See how Otis is everyone’s favourite, and see how he knows everyone will deliver him sweaty bits of foam, should he command it be so:

And with that, I am done, for now. Except for this bit….more i-D and Chanel malarkey!

6 Responses to Leopard Print and Sequins