Sometimes, something your mother said to you suddenly becomes glaringly, sharply, obviously true, and it makes you think your mother knows quite a bit more than you ever thought.

One day, my mother said that if you want something from a man, you have to present it to him as though it was his idea/plan/project. You could never just stump up with an idea/plan/project and share it and go “come on! Lets do it!” because they would invariably wrinkle their foreheads, look quite cross and then say an authoritative “No.” According to my mother, they need time to think and process and tease out the idea/plan/project, must somehow own it first, and then they may generously decide to grant you the go-ahead. Or something like that.

So, I have been banging on about a holiday because:

2) camping in Dorset was a form of torture, without a dishwasher and without much sun.

Also, school starts in two weeks and I have suspicions that my carefree life maybe somewhat curtailed forever. So I am thinking about going on a last minute holiday. Mark has of course been doing that light-hearted “Ha! Yes! A holiday…hmmm. That would be nice!” kind of dismissive distracted thing that really means “Is that you talking to me again? I want silence – let me read my Dragon Master book in silence because the evil Master of the 4th Sky World is about the flay the Goblin-Prince with some magic sword made of silken threads of the head of the Golden Queen of Twattandria.  Before I was married nobody bothered me with all this domestic idiocy…etc etc” and so the idea has been slowly dying, painfully, and with choking sobs.

But this morning, clearly in a fit of unexplainable good humour and fancy, he actually went so far as to sit down with me and look at a few places, and left for work murmuring affirmative noises. And then I found a place – a villa on Skopelos (you know – the Mamma Mia island), for the last minute halved price of £495 for a week – and then I found flights and car rental for much less than we paid last year because it is short notice and we would be leaving in two days. And I called him to run it by him, all high-pitched and happy and dreaming of tavernas and goats, and he did an aboutface.

And pulled rank in that “I work, you don’t. You don’t UNDERSTAND” kind of way. And so I am plunged into the deepest depths of hormonally imbalanced despair. Back to inner sobbing, and outer screeching (at the children, naturally).I know that if I could leave the whole thing with him, for a day or two, so he could mull, and make me wait for an appropriately long enough time, and he could begin to think that maybe he WOULD like to take us all for a sneaky little holiday because that is the kind of man he is, then we may be able to board that plane. But I do not have the time for such sly manipulation, more’s the pity. Mum was right, but it is not doing me any good.

In other news, I can report that Barnaby has an unfortunate mullet-cut, just in time for the first day of school, where the savvy kids will think he is normally a mullet-wearer and socially he will be doomed. Mother triumphs again.

And I can also report that the X-Factor is back, and Dannii Minogue is back, which made me recall the time when I changed the spelling of my name to include some double ‘i’s. And how pleased I am that it never stuck. Does Dannii sometimes wake in the middle of the night in a sweat, cursing the day her big sister Kylie told her that double ‘i’s were cool and would always be thus? I imagine so.

Here are some photos of us last weekend in Regent’s Park at the TreeHouse Gallery. I was happier then: 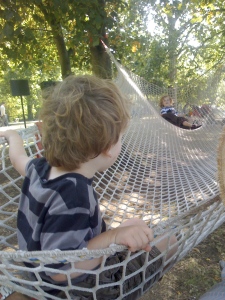 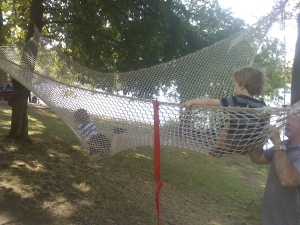 This entry was posted in Uncategorized and tagged Skopelos, TreeHouse Gallery. Bookmark the permalink.

3 Responses to Not Greece, alas