This week, I have been hot, drunk cocktails at Sketch, was nearly run over by a rubbish truck and been thwarted by the tricksy hiding post office but all this is meaningless because TODAY I SAW THE KING! Of Tonga. Yes, indeed, just as I was carting the children, a Time Out magazine, some couscous, lamb, grated carrot and cucumber for their dinner and one ice block (for Barnaby because he tidied up – the others just laugh in the face of such blatant bribery) over the road to the garden, a cavalcade of six shiny black armoured cars and one Bentley took up the street. I thought it was King Woody, but then remembered he usually just shuffles along the pavement like normal people. Out came another shuffly old man, but this time he was the King of Tonga. And he was going upstairs to chat to his ‘oldest friend’ who is old too, with a young Thai wife and well-tended flowery balcony. Who knew randy old white guy had friends who were ruling over small rugby-playing islands?

And for once the film crew were not the most exciting thing on the street, and I think it hurt.

Anyway, tomorrow they pack up. There will be no more of this: 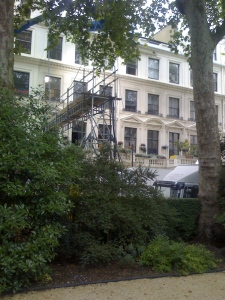 And no more Freida Pinto sashaying along the pavement in a robe and pink heels, aided by an entourage of thousands. (It turns out that she is not good at her job – there have been far too many retakes owing to her bad actressing, according to Fellow NZer, who heard it from the crew, who also got told that Danny Boyle, Slumdog Millionaire director rang Woody to warn him…) OH! Where is the sisterhood? Sorry about that maliciousness. It just came out.

So here are some pictures of the kids at GBK. It was a marvellous culinary success. 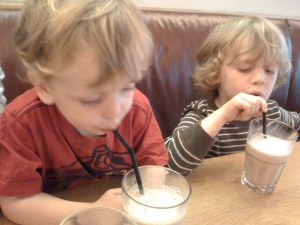 This entry was posted in Uncategorized and tagged Pinto, Tonga. Bookmark the permalink.

3 Responses to Things of note