I wrote this about my impending 40th birthday (*edvardmunchscreamface*) and yesterday pitched it to a digital site, and they got back to me really quickly and said it wasn’t quite right for them. Which means I am feeling all a bit unemployed and sorry for myself – clearly I am not cut out for the life of a hard-nosed freelancer who takes rejection on the chin.

And then, again yesterday, a man beeped at me twice when I was driving to school in the Landrover and then he pulled up and told me that my truck was ‘too big for me’ and I shouldn’t be driving it, and I yelled back and said ‘EXCUSE ME MISTER I HAVE FIVE KIDS AND A HUSBAND AND A DOG SO DON’T YOU TELL ME HOW BIG MY CAR NEEDS TO BE BECAUSE ACTUALLY IT’S THE CORRECT SIZE ESPECIALLY WHEN WE GO CAMPING’ and then he told me to shut up and I said I would call the police because he was harassing me and then he drove off and I was too mad and shaky to write his registration number down but I tried to run after him and I couldn’t keep up. Totally humiliating.

Underneath this queer little photo of three/fifths of my offspring is my rejected piece, though I changed the swear words and some of the confessionals: 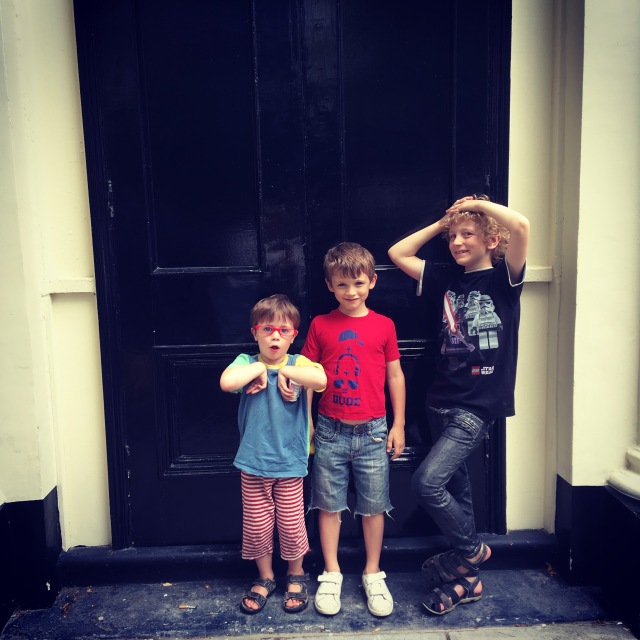 “I’m a few months away from turning mothertrucking 40. Which is fine for a lot of reasons beginning with the irrefutable fact that I am still alive and functioning – no mean feat and quite enough reason for celebration in this day and age of terrorists and breast cancers and diesel pollution and Trump. I am also safely housed, my kids are wonderfully average and perfectly well, my husband and I are still married and occasionally have enough energy for sexy time, and my knees work as they are meant to, except for cold mornings and if I’ve been sitting too long.

But it’s unnerving to finally get here, this hackneyed eve of middle-aged-ness. It looms over you as an age you might remember your parents having been, something not too far away, yet distant enough to be only the concern of other, older people. It is spoken of in misinformed half-truths concerning potential early menopause, or maybe hyper-fertility, of the onset of sprouting mysterious wiry hairs and skin tags, of cougars and fluctuating hormones and upper arms that have given up.

I know in the olden days, before 40 became the new 30, that a woman in her 40’s might well have an ageing perm or some sort of blowsy Diana cut (remember, she was only 36 when she died, and I am sure I still look younger now than she did then), maybe with a grandchild, perhaps even shifting to non-fashiony wide-legged slacks and comfortable shoes way before Phoebe Philo said it was ok. And I know that women now don’t necessarily become invisible and irrelevant as soon as 39 ebbs away; instead finding excellent looks from Zara alongside the taut-skinned teens, reinventing themselves as first-time mothers or going back to work with multi-tasking skills and a hunger to get back into paid employment with a fervour they never had in their 20’s. They go out! They are partners in law firms on massive wages! They drink negronis with their cackling best friends! Some of them direct films! They can negotiate heels relatively well and they are happier in their emerging lines and stretch marks than they’ve ever been! So it’s exciting and freeing to be at the cusp of this other stage of my life, and I am thankful for it.

But oh, how 39 makes you examine what isn’t working, and what never did. It forces you to look at all those fork-in-the-road times when you bloody well took the left when you should have taken the right – all those tiny, insignificant moments that led to bigger things that equal who you really are – the patchwork of choices and accidents that lead you to where you live, who with, what you do, what you didn’t end up doing. I see now that law school was utterly wrong for me, and at a huge expense that would have been much better spent on travel, or buying a first flat somewhere. I see that I should have pashed more people, and worried about the size of my bum much less. I should’ve learnt how to manage money. I should have chased a media job, started running earlier, worn sunscreen and left my eyebrows alone. I have never really lived in a home that I have owned, and so my kids’ childhoods have nearly passed me by without any thought to decorating their rooms nicely – they have just had to fit into whichever spare corner of the various flats we have lived in. I also forgot to go live in New York.

And what works? Well, we remembered to get a dog before the children grew up and left home and had to moan about a pet-free existence to their future therapists, and so they have had that, instead of IKEA coordinated rugs and lamps. I didn’t change my name when I got married, and I regard that early show of strength against the pressure to do so as a sort of enduring triumph. I have learned to cook well but also to outsource or frankly ignore all those rubbish bits of domestic life that I don’t like – and as such, ironing boards in my family are spoken of as urban myths. I have discovered that my love affairs with books and my female friends are the things that sustain you and feed you and help make you a whole person. I have travelled and written things and had as many children as I fancied and am at peace with my mothering body which wears its scars well. I never brush my hair but also never leave the house without a slash of bright lipstick that I believe fools the world into thinking I am groomed and therefore together. I wear leggings to yoga and don’t take them off all day because I am no longer ashamed of what the back of my thighs might reveal about my worth. I let myself have fun.

So it’s nearly here – the October birthday that feels like the ending of something and the beginning of another. I intend to drink and to eat cake and surround myself with people who also limp a bit when they get up from a chair. I’ll let you know what it all looks like from the other side.”

So, anyway. Here’s a photo of Otis who fashioned his pancake into the shape of a lady-part. I didn’t suggest it, honestly: 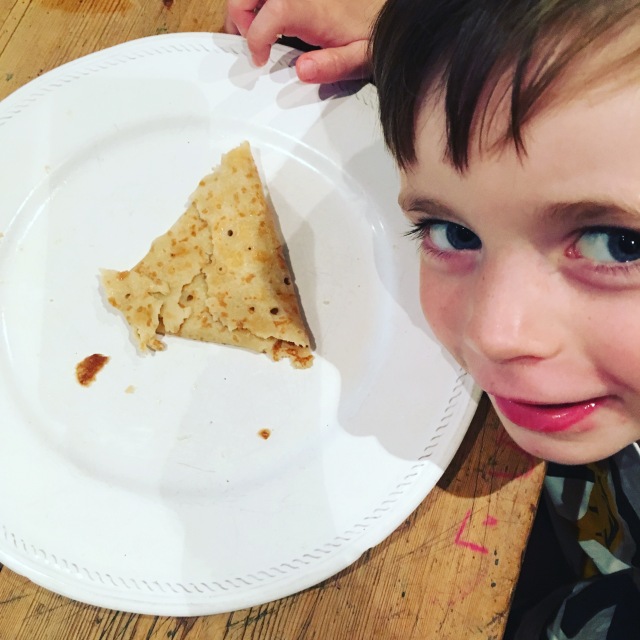 I leave you with the dog, who has taken to hiding under the new curtains and peeping out a tiny bit, in the manner of a Vermeer: 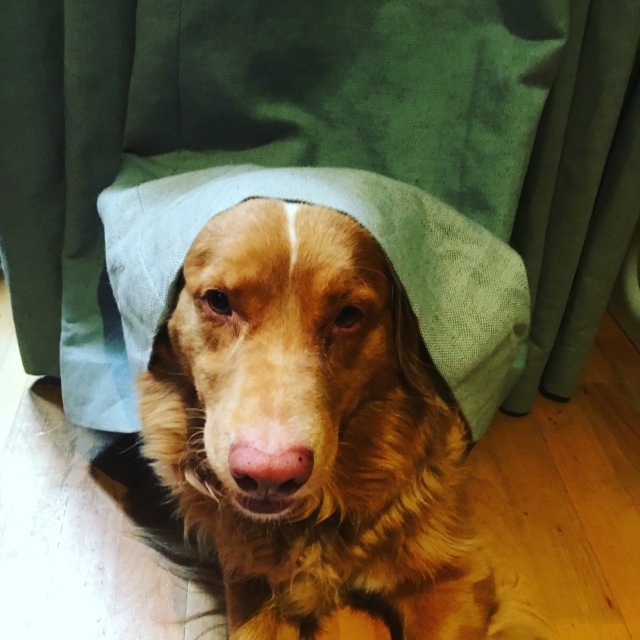