Kinder Than Is Necessary

We have reached a literary graduation point here in our two-bedroomed-over-furnished-and slightly-hoardy-flat that we call home – the age of Young Adult fiction has arrived! Literally! Via Amazon! (rather than an actual bookshop because my ethics get hazy when it involves venturing out too far). And what a joy. The bigger boys have been reading proper books, all I Capture the Castle and Lord of the Flies and David Walliams books and Judy Blume, as well as The Secret Diaries of Adrian Mole, The Outsiders and books like Wonder by R J Palacio – the kind of books that just might move them in some way, might permeate the solid wall of pre-teen ego, tempestuous hormones and general non-empathy and help turn them into kinder people. And I am making my way through them so we can talk about them and have some sort of family bookclub where we all sit around the table and eat crisps and drink age-appropriate beverages and laugh and tell each other our thoughts and cry and get closer. That’s my plan anyway (other plans include: giving them a nice room one day, teaching them things like who Cindy Sherman is so they can get the pop culture references in The Unbreakable Kimmy Schmidt, baking with them and not shouting). So, Wonder – about an 11 year old boy who has been born with a terrible facial abnormality and who bravely starts middle school after being homeschooled – has kindness and unkindness at its core.  There’s a bit at the end when the headmaster gives the graduation address and tells the kids that the best thing to do is to be kind, and more than that, to be kinder than is necessary. Which, if I learn nothing else for the rest of my declining years, might be enough. All the best people are kind.

Not Otis so much though, who apparently has been bothering the babies at nursery with a few sneaky shoves and a bit of heavy-handed forehead-tampering and shouting a bit too loudly near their ears. He’s too young to read Wonder, so I guess it is up to the rest of us to model better behaviour. Hands by your sides, inside voices, gentle touches, GET AWAY FROM THAT CUTE TODDLER.

He did make a very delicate and highly decorated salt dough thing for Father’s Day, which was baked and painted and glittered and tied with ribbon with a very nice laminated generic poem attached. He came home from nursery, gave it to both me and Mark, then took it back and started eating it. Perhaps he’s been spending too much time with Magic – the both of them are fairly unfussy when it comes to foodstuffs. Here it is, after it had been sampled and then rescued: 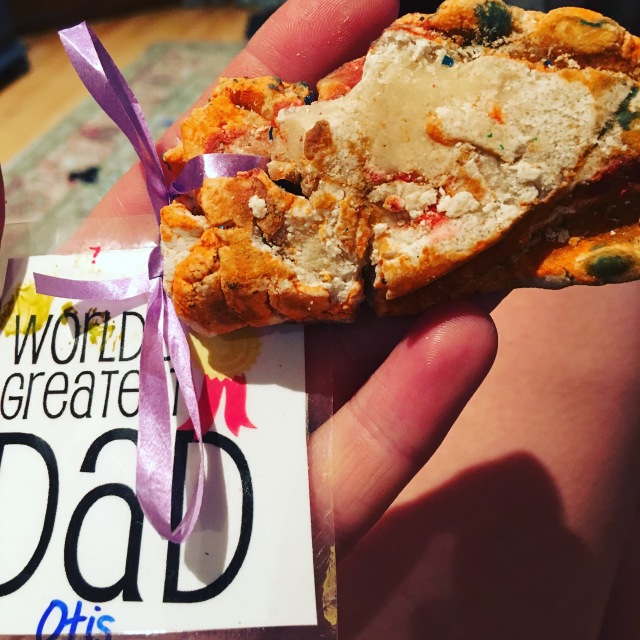 There’s nothing like a half-eaten turd-shaped salty lump of glittery baked flour to say “I Love You”.

So, mid-week last week, Neradah and I took off from our jobs and homes and children and yoga classes and drove to the New Forest to a poshy hotel to get massages, lie in a hammock, eat dinner and many items of carbs, have a sleep, have a massive breakfast and then drive home past the wild ponies and horses. This was me in the hammock. I instagrammed it, then deleted it because of my unsettling generous thighs. Deleting a perfectly lovely photograph of your hammock, shoes and legs is bad form, so here it is. 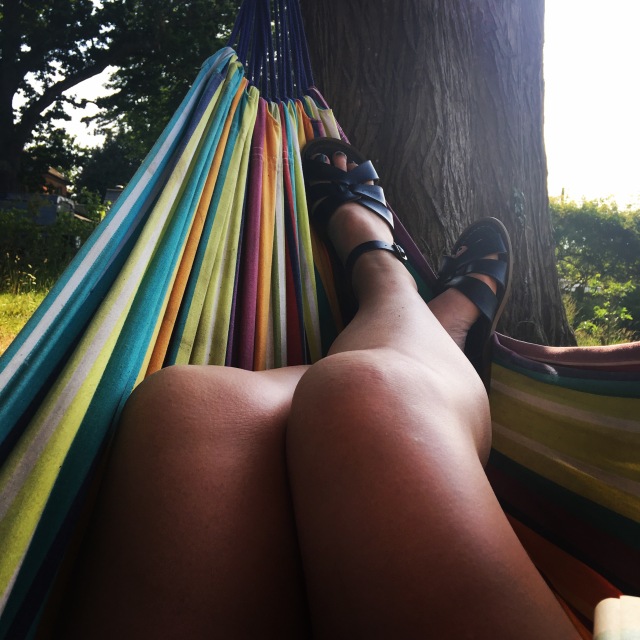 This is us later, after really great bread, salty butter, and deep-fried broad beans. Later though I got the meat sweats from the pork and Neradah got the bad tarragon dressing. There were words with the rictus-grinning waiter, and he ignored it, and we felt a bit cranky, which made the sorbet taste a little of discontent: 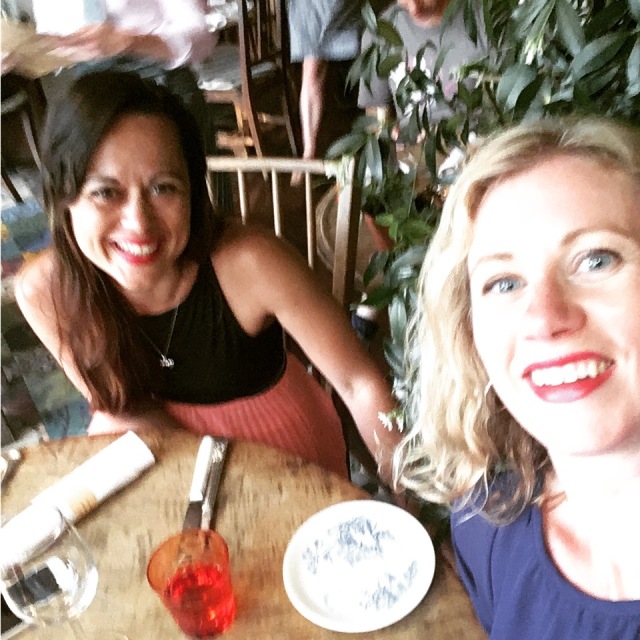 But look at The Pig’s library! So much more tonal than my place: 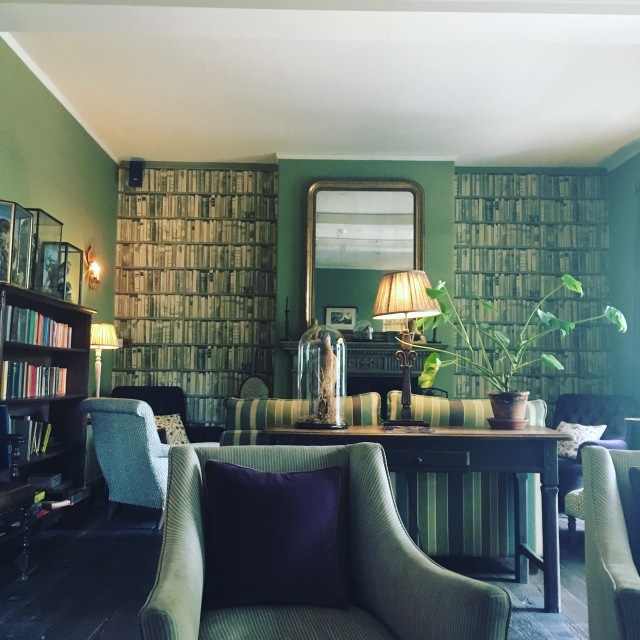 Then on Saturday we camped out for a night in the communal gardens across the road with the neighbours. Ours was the biggest tent – a three-bedroomed monster that only smelt a little of damp and degradation – out of shot because it took up a quarter of the garden. We had a barbecue and made s’mores, which I know of only through lots of American The Babysitter’s Club-type fiction of my youth. They tasted of sugar and comfort and smoke. There was an altercation between Mark and some Scandi-type people who kept bringing their husky into the garden (dogs are NOT ALLOWED and Mark is *quite* the unofficial warden) and then there were tears about paddling pools and the banning thereof. Local politics are a drag. And the best thing? Otis decided that tenting wasn’t for him, and so he and I snuck back into the flat and slept like kings, I tell you. KINGS. 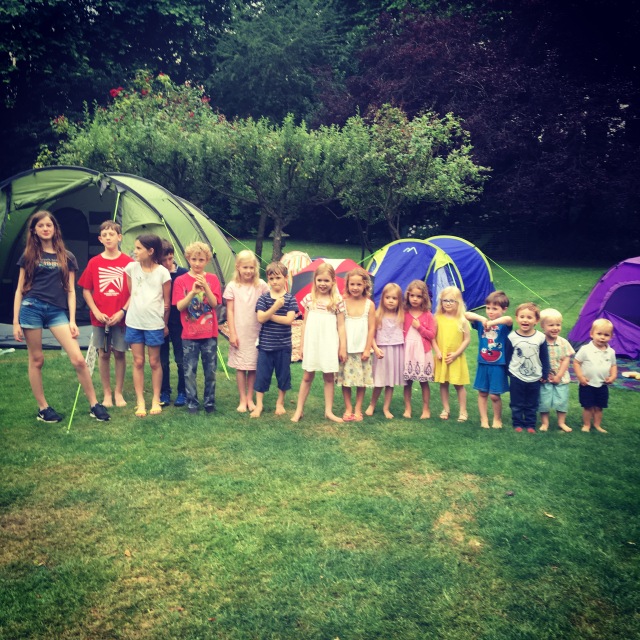 If camping is all about going over the road for a bit, hanging out with your friends, eating marshmallows and drinking somebody else’s prosecco, then sleeping in your bed with no need for earplugs because your husband is in a tent a few meters away, well – I’m ALL IN.

7 Responses to Kinder Than Is Necessary