Wondering When The Adults Will Arrive

Here’s a confession, which isn’t really a confession, because it’s a bit obvious to all who know me (and heck! probably strangers on the street): I am a financial and political dunce. I could have done with money management lessons at school which may well have saved me from the cost-per-wear LIES, and perhaps I may have understood that savings and pensions and things are there to keep you safe, and that keeping safe is a good thing, not just a boring thing, and then perhaps I would think twice about frittering money away on things that are short-term totally excellent, but long-term don’t keep you warm/fed/dry etc etc. Been paid? Great! Prolly time to go to a Christopher Kane sale to get a massive skirt which will look really good the two times I wear it! And if there is some tax to pay, well, hmmmm, prolly someone/anyone/Mark might spring for that….after all, it’s no good using your money to pay the taxes if you don’t have a floor length ballgown skirt to swish around in, right? Too bloody right.

And the same with politics, really. I’ve lived in nice sensible countries whose governments seemed to have a vested interest in keeping people safe and educated and well, and the people around me have earned enough to keep us all collectively afloat and fed and so it’s been easy not to get terribly engaged about adulty political things. We’ve had strong women leaders in my lifetime and relatively pleasant race relations and I always felt that the parties were all saying much the same thing and that there was probably a system in place that would keep basic things going regardless of who was in charge, like electricity and schools and fairness and smooth tarmacs and regular rubbish collection.

Perhaps, even, there was some sort of deep-voiced Kindly Overlord who kept an eye on the politicians and the governments to make sure things were ok and that the good was nicely balanced with the not-so-good things. There might be challenges along the way – Westboro pro-lifers and shameful homophobes and redneck racists muttering a bit of filth now and then, perhaps some sort of difficult situation going on in Taksim Square and some terrible business with Yazidis and abstract anomalies such as Darfur and neo-Nazis and Mugabe and North Korea; but, probably, the Kindly Overlord would sort that shit out once it go too bad or too close. Anyways, there was always a petition to sign to express my concern and indignation. But LO! The scales have fallen off my myopic eyeballs and I am getting that creeping feeling on your skin when you realise that:

a. I was wrong about everything, and

b. no one is in charge, and

c. the world has changed significantly and it’s going to end really badly for everyone.

I took two of the boys on the women’s march, and I made signs that I copied from instagram and the kids made their own: 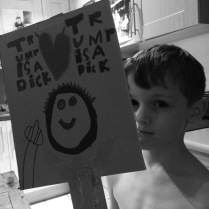 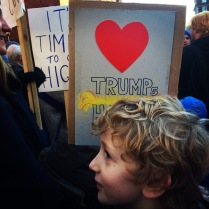 I saw that our placard messages may have been a bit mixed, what with me championing tolerance and love and feminism while the kids just stated the bald truth about That Man – which at first made me feel a bit like perhaps I have been a bad mother for ignoring the nuance of these things, and that the kids should show a bit of respect and that maybe some sort of balanced non-Trump-bashing kind of approach might have been a better way – after all, Love Trumps Hate. But then Trump had his first week in office and preceded to tear apart all those things that I thought were a given, and really, there’s no nuance here.  Nor is there any Overlord, alas. We are on our own and there are terrifying people with their hands on the wheel.

What, I ask you, do I say to those who think this swing to the self-righteous, liberal-hating, intolerant and unkind right is good and Godly? What do we do? What do you say to the people who see the Muslim ban as a perfectly justifiable way to be safe, just like the guns they are proud to own? And those who keep posting the pro-life videos about embryos but then who want to push out of their borders the kids and families who have fled their own homes by ugly wars?  I really don’t know. What do you say to those who thank Trump for championing traditional marriage, while ignoring his own very liberal approach to fidelity and sexual assault? I am confused and troubled and for the first time in my life, I feel like political dunceness isn’t ok anymore.

Then we read this for bookclub:

If you thought We Need To Talk About Kevin was alarming, then try to read this one without throwing it across the room in despair. You want believable apocalypse? Completely likely and realistic dystopia? An account of the collapse of all the systems we all believe in? Read that one, my friends, grab those kids of yours close and apologise to them. And then, let’s talk.

11 Responses to Wondering When The Adults Will Arrive