Ok, so, last weekend we went to Naples in search of Elena Ferrante for REALS! Though she wasn’t immediately obvious, because she is anonymous and mysterious and so we went looking for the characters in her book (you know, the tetralogy beginning with My Brilliant Friend, a sell out everywhere, a massive epic tale of two best friends who support each other but who also have these festering underlying jealousies and wish each other dead fairly often, and all about education or the lack of it, lovers, careers, babies, other actual dead people, the Neapolitan mafia, pizza, the way you can’t do lots of good work if you have kids to look after, etc) and we didn’t find them either.

We did convince a raffish and mildly handsome cab driver to take us into what is believed to be the setting for the neighbourhood where the story is set, though the cab driver was very dubious, and said:

“Why do you want to go to the shit zone? The shit zone is shit! We will have to drive extra fast and it’ll cost you ten more euro”

and of course we were all exhilarated like pumped up old book club ladies out on the town (which we totally are) and we nodded and were like:

“GIVE ME SOME OF THAT ITALIAN DRAMA, Sexy Cabbie”

though we didn’t say that out loud, you could just tell, because all of us had shining eyes and were a bit sweaty.

So we drove around to the shit zone, and it was a bit shit, and even though the sexy cab driver had amplified the sense of danger, there wasn’t much more than ugly estate housing and some nonnas shaking rugs out of their stories-high windows. But, you know, it was probably pretty dangerous. *coughs*

We stayed in an airbnb place for my first time ever, thanks to the airbnb wizard that is Celia, and it was just as excellent as you would hope for. An original mid-century modernist apartment five stories up in the old centre of Naples, with motorbikes zipping around every corner and fish mongers hawking their still flapping fish and shellfish in giant shallow pans of water down at street level , and corner shops selling the most ridiculously camp easter eggy things. Everywhere was graffitied, everywhere looked old and dirty and buzzy and alive. We all loved it.

Here we are, in our apartment, worrying about no one but ourselves and our stomachs. Where to eat? Is it time for another aperol spritz? Shall we try on each other’s clothes? Swap lipstick? Finish the fourth Ferrante? Not think about anyone else? Yes. Reader, it was very good. 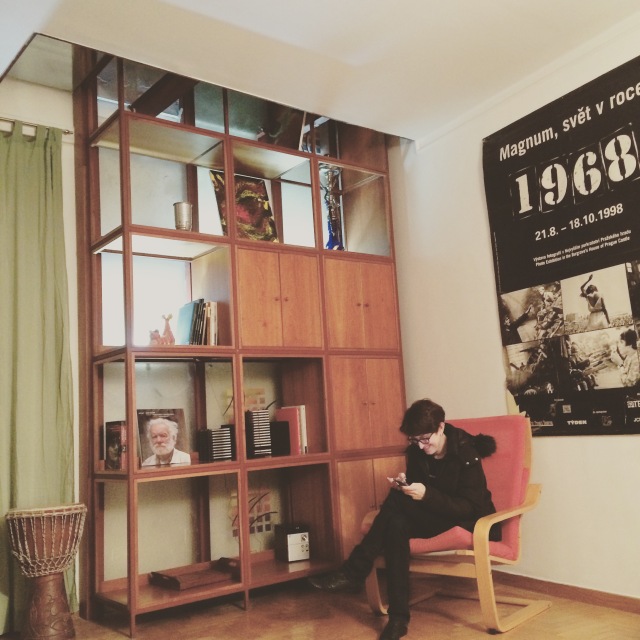 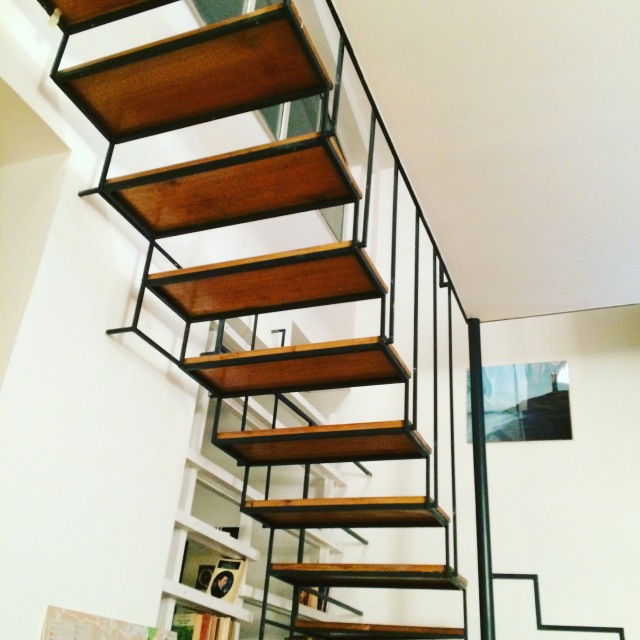 Here is the street outside with the motor bikes and the european-ness: 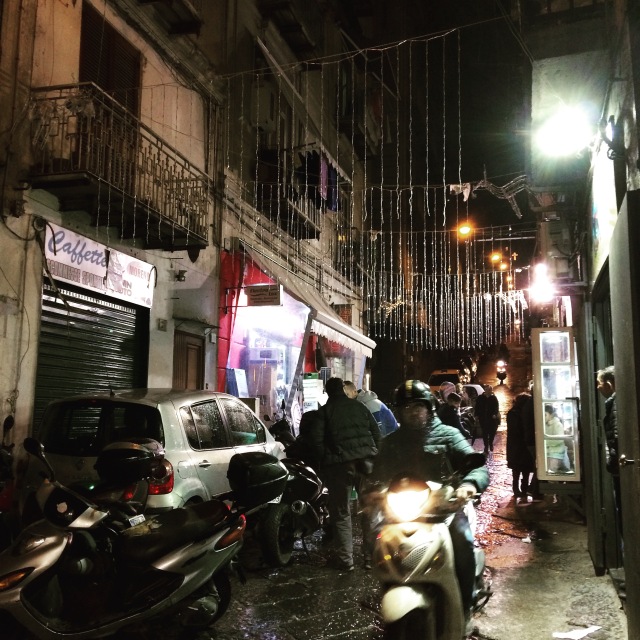 Well. It was all cheap and so good, so dreadfully good. The aperol spritzers were very frequent, as were the lattes and MORE PASTRY. We learnt from a handsome Milanese fella that when you go out to eat at a trattoria, don’t order appetisers, primi, secondi, side dishes, and dessert, or you won’t sleep. Just go for the secondi, because it is usually better, and side dishes to share. Otherwise you will be an ungainly digesting fatty, lying awake all night with the pasta sweats, and the dry mouth, reliving the aged goats cheese and oily tomato sauces, despairing over your inability to PUT THE FORK DOWN. So we took on his clever ordering strategy, but too late. We were leaving by then and we were still digesting. 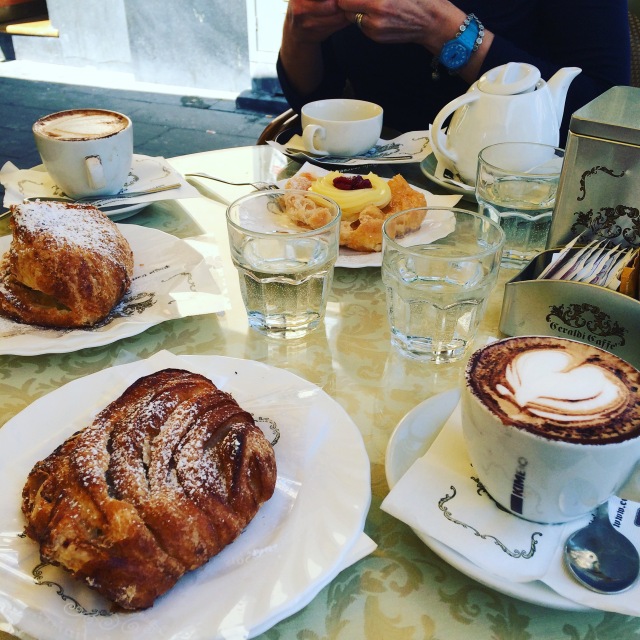 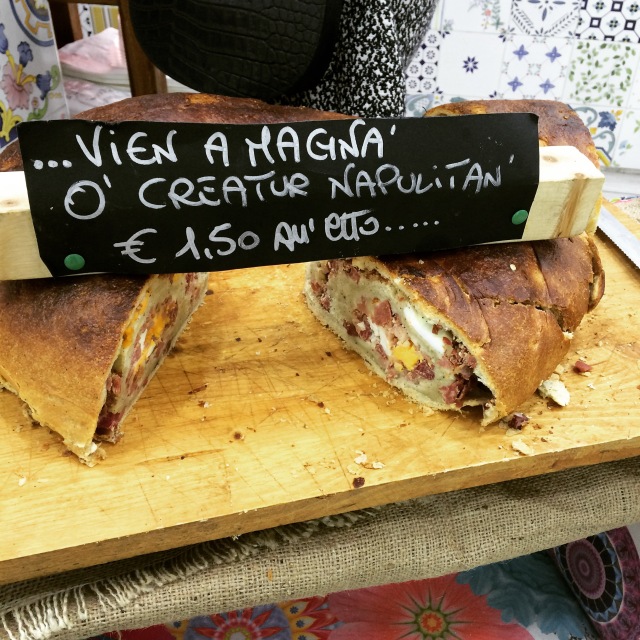 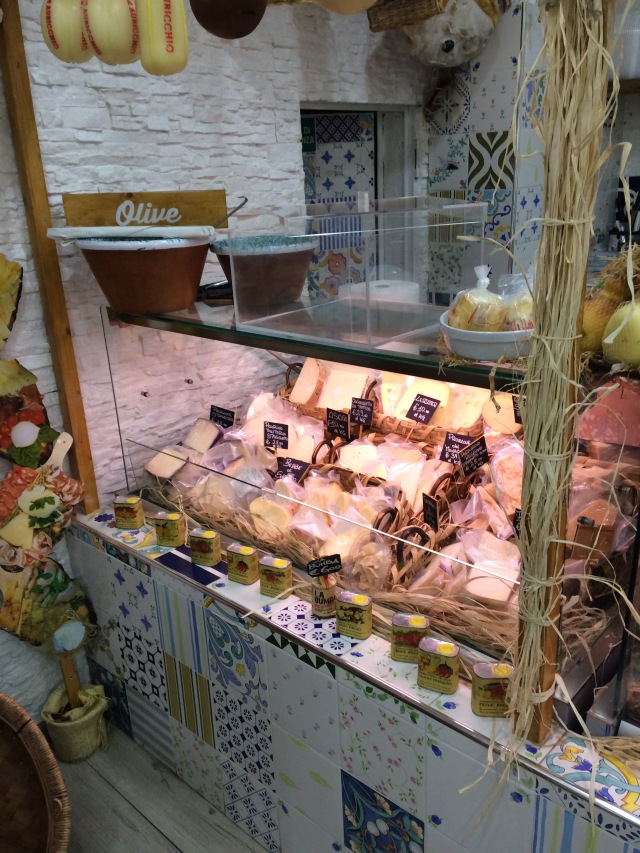 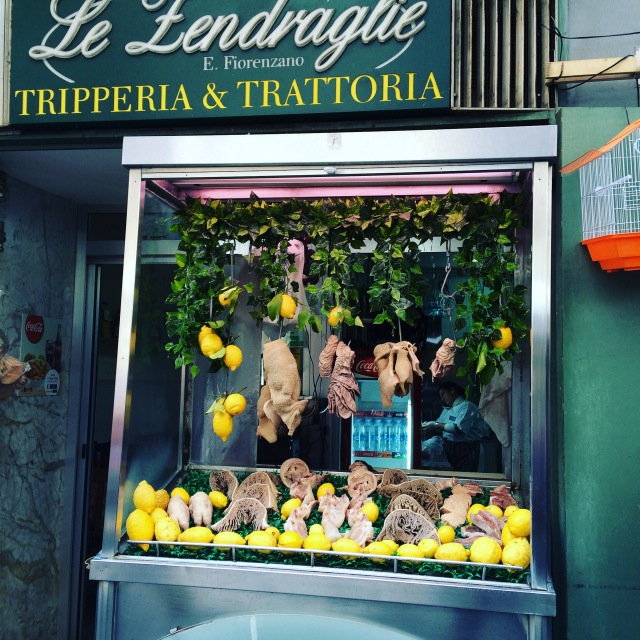 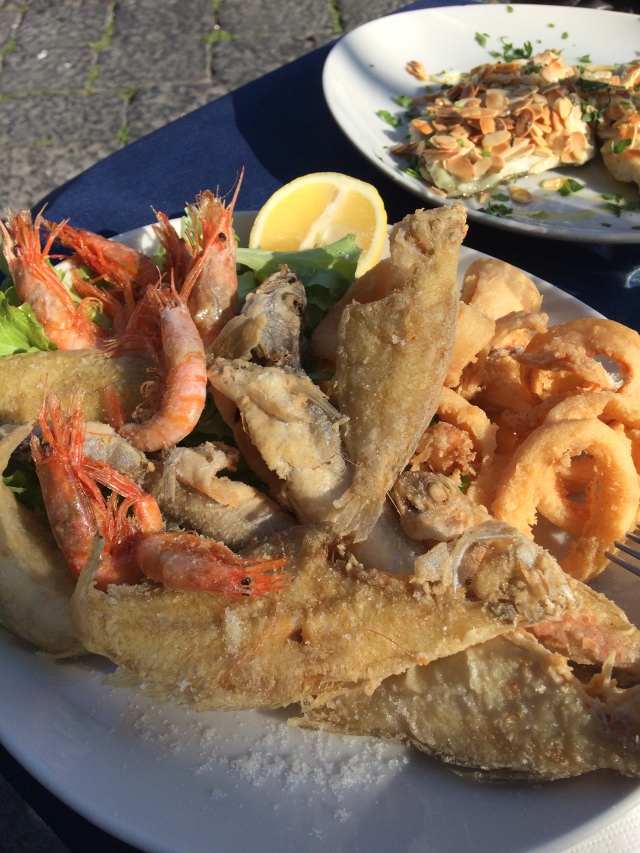 Obviously the seafood thing was a bit traumatising, and I really tried to man up about it, especially when we went to a place called The Miracle Of Fish which was pretty much only fish on the menu. I suppose that is kind of obvious. Anyway, the lovely Miracle of Fish family learned of my seafood phobia through Sue, who did some excellent Italian-speaking from her year of being an Italian babysitter, and they were thrown, frankly, that a) I was scared of fish and b) I went to a place called The Miracle of Fish for my lunch. But they accommodated my glamorous New York-y off piste menu ordering and gave me a steaming plate full of aubergine pasta which was delicious and did not have any fishy smells to it, though I was cautious with every bite, like a terrible food bore with an imagined food allergy.

Here is Sue, with consistent good lip, sunning herself in the sun after doing some Italian and awaiting a huge plate of fish, miraculous fish (see above): 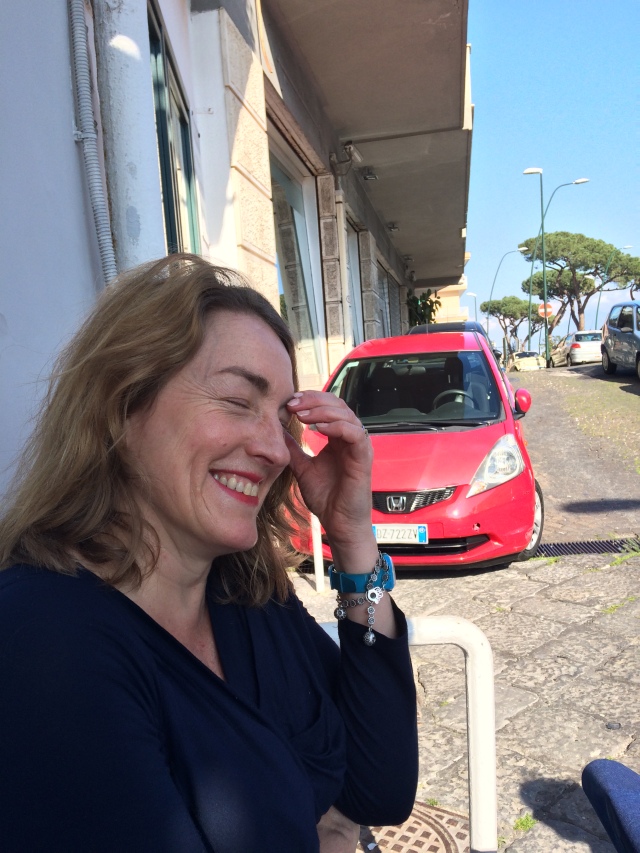 And then the pastries. Well. Because it was Palm Sunday, there were San Giuseppe’s zeppolla in every bar which are round choux pastry circles dusted with icing sugar, with custard and cherries on top. They were in every restaurant, in every bakery, every food stall, all slightly different, some more eclair-y, some a little like portuguese custard tarts, all with a hit of sour cherry and lemony custard. We just ate them and ate them. This is about the seventh one, found in a little bar across the road from the Museo which held the Pompeii mosaics, made by the bar proprietor’s mamma who lived upstairs: 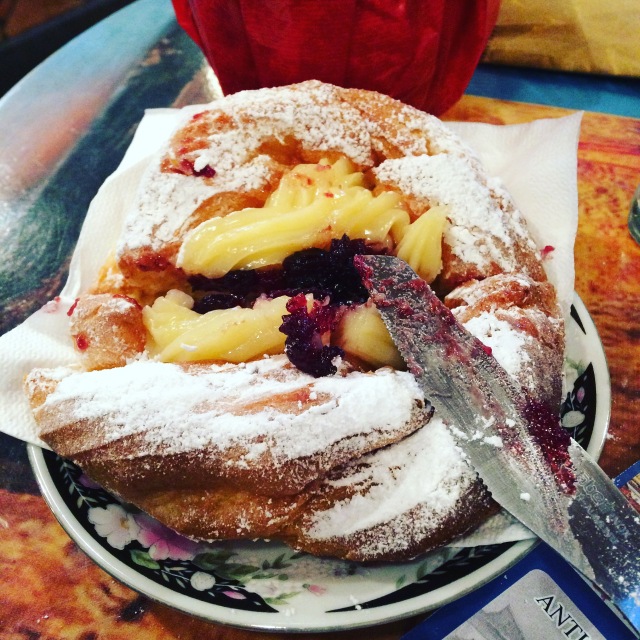 And these, which were also found everywhere, all crunchy and buttery with a lemony orange-blossomy ricotta custard inside. Amazing. Life-changing. Ouchy when the sharp bits stabbed your gums, but totally worth a little gum-bleed: 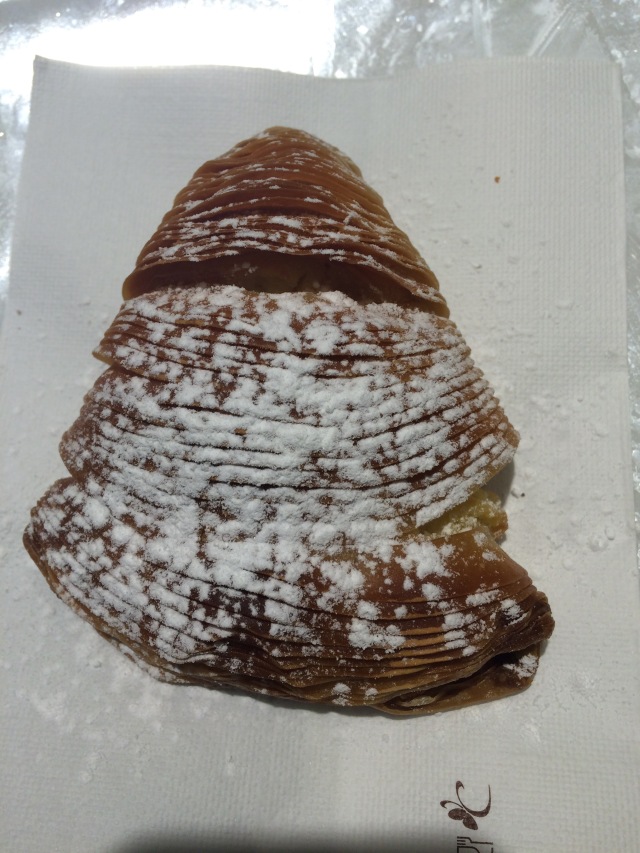 Here is Vesuvius and views from the apartment terrace, enhanced quite nicely by filters, obvs: 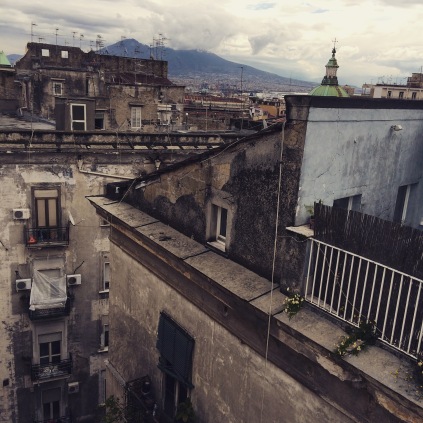 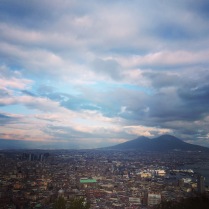 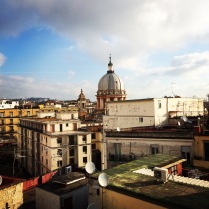 And we did a little spot of shopping because it was sort of research for the book, and because Italian boutiques are tiny and brilliantly curated and cheap, compared to London when you aren’t at a sample sale. I got tiny coral earrings from an old man on the Vomero who was carving out cameos and other lovely things with his chisel, and this dress, a proper vintage number. I am also shimmering from the sunburn and aperol: 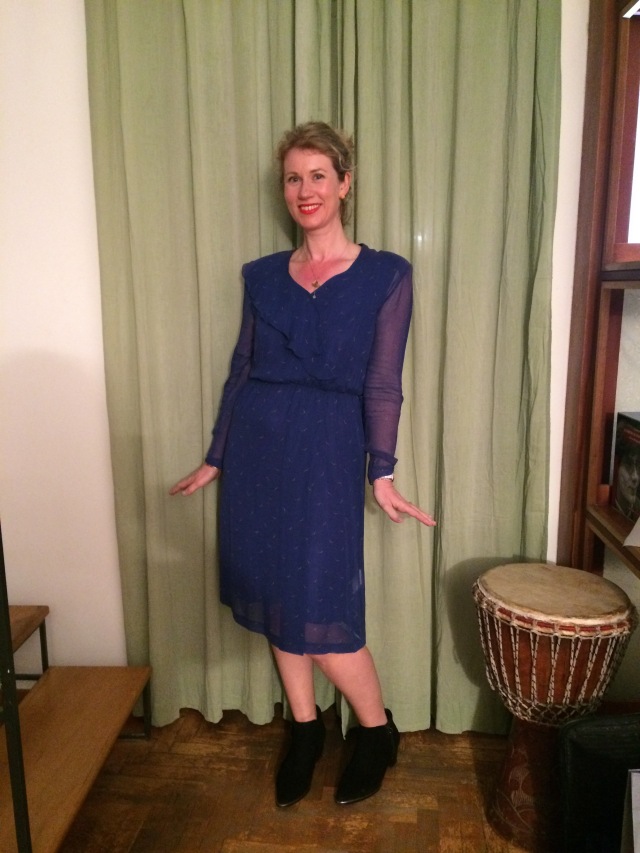 Here we are eating out on the first night, in instagrammable surroundings: 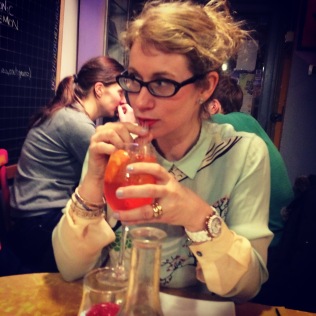 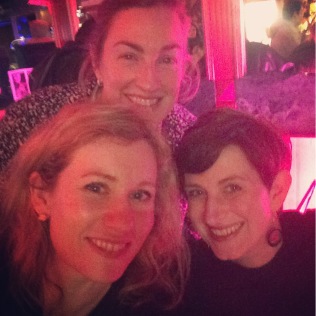 It was very female and bonding and lovely. We didn’t find Ferrante, or Lenu or Lila, but we did get a bloody rest from everyone else. And that was perhaps finding Ferrante after all.