We are in Gozo! No one actually knows where that is. It is a tiny island off Malta, and Malta is close to Sicily. It takes half an hour to drive across the island, though you wouldn’t be able to do that, because there are no maps and the roads are potholed and you would just give up lost among the tiny identical villages filled with Roman Catholic statuary and golden boxy buildings made with crumbling bricks. Watermelons and tomatoes of the most mythic enormous tasty robustness are sitting in trucks for sale and there is a man who drives around his warm bread and cheese and peas pastries called pastizzi which are shaped like a fanny, all so you can eat them for breakfast by the pool in your bikini and your tasselled fake viscose kimono from ASOS. 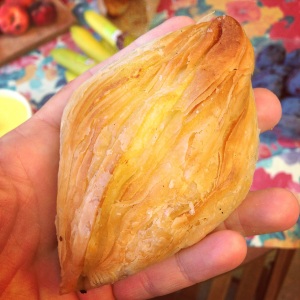 Tell me you see it.

It takes three hours to fly to Gozo from London, which, of course, feels like 37 hours when you have a baby on your knee who hates you and your hot annoying lap and who wants to headbutt you in the cheekbone all the time. And when you are flying Ryanair with a magazine rolled up underneath your seat because they don’t have magazine holders in the seat in front of you (BUT WHY NOT? IS IT FABRIC COSTS? THE COST OF SOME SCREWS? IT’S BECAUSE RYANAIR HATE YOU, TOO) and the magazine slips and rips and gets smashed underneath the trampling feet of the children who can’t and won’t sit still, and you have no iPad because Ned smashed the screen of the new one in one of his ridiculous rages, and then Casper starts to annoy the man in front by undoing his tray and then doing it back up which rocks the man’s seat, which makes the man keep turning around to look at us and it prompts you again to tell Casper off but you are powerless because your baby is too busy smashing your face up.

But that’s old news. Brad and Angelina have taken over Sanap Cliffs to make a movie, and they have closed it all off and even boats can’t get near. Which feels very starry and rude and not quite in the spirit of things here. I may have thought we would get together socially on the beach, bonded by our love of children and, er, the Early Years Brad (especially those naked photos of him and Gywneth frolicking around a pool) but it seems that we shall not share a friendly cheese fanny pie and local limoncello after all.  It hurts just the tiniest bit.

The baby, while not headbutting me, has been enthusiastically sampling the Gozitan local delights. See below for the impressive culinary range he has attempted and mostly not spat out – watermelon, Maltese sausage, pizza, prune and tomato, and, of course, cheese fanny pie. This evening, he declined all actual food, tossing and spitting and flinging with all the hauteur of a foodie Anna Wintour, and instead ate masses of ice. And then cried because his cheeks got white. 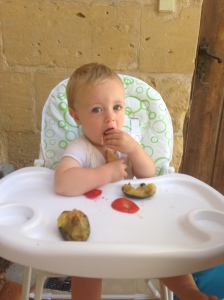 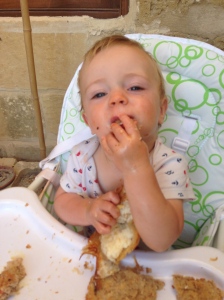 All this talk of food – it seems the right point at which to have a word on my bikini. Like that woman in the paper the other week I have a stomach that looks as though it has housed five big babies, doughy and stretch-marked and jolly and flappy, and my upper arms are what could best be described as ‘solid’. My Big Legs (my mother says she noticed them as soon as I was born) are finally starting to shape up from the ungainly but dogged running, but the pear-shape remains, and no bikini-bottoms in the world could contain my falling-out bum-bits. But there’s something about being nearly 37, and being fit and strong, and having these five little boys follow me around like badly-behaved ducklings that has made me feel different about my ability to swan about in a bikini – mine, bought from Marks & Spencers last week with my mum for the massively reduced price of £4.98, is being worn with no shame. I used to find it all very tough being on the beach, walking very fast to the water’s edge with a tightly wrapped sarong, dropping it at the last minute then splashily making my way to the water up to my waist, regardless of the temperature, so no one could see my Terrible Bum and Terrible Thighs. And now, I am walking around Xlendi beach OWNING it. It’s really so liberating not struggling any more. The bad news is, you might have to have about five kids to get there.

Anyway, the beaches are lovely and the pool is slightly small for all of us but so far we have not had any dramatic near-drownings or babies slipping in to their watery deaths. Mark took the bigger kids snorkelling this afternoon through to an underwater cave and he smashed his head up on a rock and posted it on Instagram, which I think looks a lot like a hairy bleeding testicle and Barnaby has had some loomband calluses, and of course, there has been a little bit of sunburn. But we’re ok, really.

Noah had some birthday spending money to blow, and he went for this most excellent solar-powered fan hat, which has inspired respect and envy from all of his brothers. Seriously, that kid knows a heat solution when he sees one. 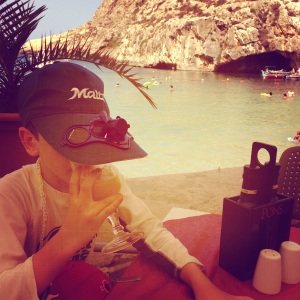