It’s the first week of the holidays and mostly it is just lovely. The calm mornings, no homework, no school lunches to make, late evenings in the garden running under the sprinklers and eating toast and jam last thing before bed. My parents are here staying a street away in a five bedroom vicarage, so they can pop in and out and get over their jet lag and take a rest from the noise whenever they need to. The kids think they are just marvellous and fun, especially the way both of them can take their teeth out. That’s like the most magical gift of all.

But it can’t all be good, right? So yesterday we had two incidences of Terrible Stress, and I was broken by the evening. The morning was all about the yearly trip to the dentist, and our dentist is a tiny, strange set of rooms about a newsagents, with the last few vestiges of the main dentists’ former Christian vampiric ways  evidenced by the angel art on the walls, although no Christian booklets were strewn around this time. It seems Harpers and the Times has replaced the religious tracts for light, waiting room reading. Anyway, we got there early, after I dropped off the baby (gratuitous baby shot of him in a lovely raincoat)

with the kind flexi-toothed grandparents and sat in the tiny, warm, rickety-chaired waiting room for an hour, alas. There was a water machine with about 14 plastic cups and a kind, selectively deaf receptionist. I sat them on chairs, grabbed a Harpers and hissed at them to sit on different chairs, touch no one else, not to move, talk quietly, and NOT TO TOUCH THE WATER MACHINE BECAUSE NONE OF YOU ARE THIRSTY!

Immediately, the Mysterious Switch of Stupid turned on, and the room descended into a writhing mass of wrestling, kicking, screeching, hitting, crying small-boy-chaos. They went through all 14 plastic cups, spilt some, crushed some, dropped some in the bin, retrieved some out of the bin, drank, found a wooden whistle, whistled a lot, hid behind the chaise longue and fiddled with wires, rocked on the old rickety chairs and made loud, worrying noises, fought over which kid sat next to which kid and over their knees touching and ended up lying on the floor in a mass heap, watching themselves in the inappropriate mirrored ceilings. I was so mad, but powerless, which of course they knew, and so all I could do was squeeze upper arms and hiss and threaten to video them and put it on youtube. They kept saying they were bored, and I explained (while gripping their arms in my special vice way) that bored is just something that you have to deal with, sometimes. It’s not interesting or special to find out you are bored, it’s just a thing that everyone feels. It doesn’t mean you are entitled to hang out of the first storey window screeching or ripping newspapers apart.

HA! They really aren’t, I told him. We left after some profuse apologies to the receptionist and other alarmed waiting room clients, all no doubt dying of thirst but unable to drink because of the conspicuous lack of plastic cups and overflowing bin. The boys barely made it home with their bulging bladders.

So that was the morning.

Then the afternoon was all fine, although there comes a point when most of them are happy and reading or playing quietly and they swear they don’t want to go out, but you just know that if you buy into the false calm, that it will bite you in the arse later. You know it, but you don’t ever learn. So there I was making Ottolenghi’s beef and lamb meatballs with broad beans, and I’m shelling the beans and it is taking ages but I have to finish, and the two bigger boys are reading and the other two decide to take their scooters around the block for a spin.

Ridiculously, alarmingly, sadly, this bit might require some explanation. But first, read  this.

Clearly, we live in a cultural climate which is overly protective towards children. The status quo is that we watch children at all times, and much of that makes good sense, especially considering the number one danger where I live, which is traffic. Beyond traffic, though, there really isn’t much to be fearful of. We know that abuse of children is nearly always perpetrated by someone known to the kid – the uncle, the family friend. It’s really not the stranger.

It happens, but, according to the Atlantic article, it would take 750,000 years, statistically speaking, for the Dangerous Sex Murderer Stranger to finally come and take your kid from a public park. So, then, what are we so scared of? I want to root it out, I want parents to ask themselves what the danger really is of letting your kids out, letting them have some independence, letting them do some normal kid stuff without our watchful eyes searing a hole in their backs and knee-capping them forever. How about this – I think there may be more damage done longterm to kids by treating them in this barely-concealed hysterical overprotective way that letting them out for a bit on their own, once the risk has been assessed by the parent who knows their kid and who knows the culture of a place. Imagine if we all did that, and kids could reclaim the outdoors again, do a bit of roaming with their neighbourhood friends, and grow up just a little, feeling like they could handle stuff on their own. Surely that’s an obligation on us as parents?

Getting back to the scooters, then. So I let Casper and Ned out, together, to ride their scooters around the block, which takes about a minute to make the circuit, and over which there are no roads to cross. It is a straight, round circuit, passing neighbours and friends’ flats, passing people we have passed for years.

So they did it, and kept coming back to the top of our stairs, then shooting off again, having races with each other, laughing, making a healthy racket, pleased with themselves, a bit sweaty, shirts off. And then.

A woman comes to the top of the stairs, following the kids on their last round. A very nice, older woman, who comes over to talk to us, the parents, because she is very concerned about the children, and wants to know who is looking after them, and why we aren’t with them. She tells us that we can’t let them scoot around the block because it isn’t safe. No doubt because a Murdering Sex Stranger might come and intercept them and take them both, screaming and hitting wildly with their heavy metal scooters, in about 750,000 years. Mark goes out to talk to her because I cannot handle it – the annoyance, the embarrassment of being called out to be not doing my job, the accusation that I am putting them at risk, the way that my parental choices are suddenly up for communal appraisal, the anger about how stupid it is that their lovely, lovely, innocent, healthy scootering has just been taken away from them. I’m just not strong enough constitution-wise to let them do it again. And so I seethe, and Mark comes in, and says maybe she is right.

I think we have it all really, really wrong.

MORE EVIDENCE OF MY LACKADAISICAL PARENTING/CHILDHOOD

Here is me, as a child, in the surf, and no one is holding my hand! 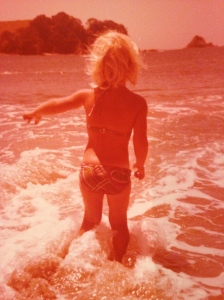 Here are my kids, at the top of a statue, and I didn’t put a stretchy tarpaulin underneath them in case they fell!

Here’s the baby with a bit of ice cream cone wafer. Notice I have not pre-masticated it, in case of choking! 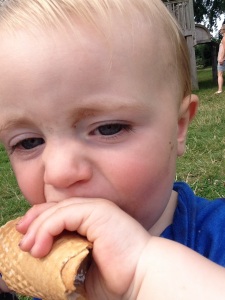 Here’s Barnaby with two bits of wood he nailed together by himself with a real hammer, and he stuck bits of wire to it! He didn’t even use gloves!