There is quite a bit of coffee going about my veins, and I am a little bit sweaty and darty-of-the-eye. HELLO TUESDAY! Tuesday was going to be awesome, there was going to be no kids until 1pm, and I was going straight from school dropoff to The Borough Barista for an excellent and shaky-making solo flat white, then to the Selfridges sale, where I could properly access/assess the racks of slightly soiled Miu Miu and ill-fitting Vivienne Westwood without being annoyed by children in prams. Mine, mostly. The maybe a sneaky look at the Matches sale for more of the same unlikely-to-fit fabulous items of expensive clothing. But Casper has a fever and so I am home, trying to be motherly and kind, and trying not to get a babysitter. I went so far as to text one, but I backed off from actual employment, because of The Guilt. It doesn’t bother me much, The Guilt, only occasionally circling my periphery like a pesky fly and very rarely attempting to land on my nose, as I have developed a kind of armour against it. It is called

My simple justifications are as follows:

3) They will end up in therapy anyway

And so I am mostly unburdened by much of the oppressive mother-guilt that lies so thickly in the WASPy middle-class air. But Casper got to me, and here we are.

Here are some photos of recent gadding about. Even though the weather requires tights and singlets, there is some weak sun appearing daily and everyone seems a little bit happier and healthier for it, and the summer calendar of excellent events goes boldly forward. Last weekend the Soho Parish school put on its brilliant Soho Food Feast, where for £15 you can get into St Anne’s church grounds for two days worth of the most delicious restaurant samplings for £2 a piece. It attracts very new, very sexy, popular foodie places, like Polpo, Brindisa, Rochelle’s Canteen, St John’s, and it is a total bargain. Mark got really excited about the burgers at Meat Liquor and GBK, and ordered us all two burgers each, which the children promptly unwrapped, noticed the cheese/gherkin/tiny bit of salad and pronounced inedible. Which meant that I ate three burgers and Mark ate about six. And the children wept. But there was dessert, and other little bits what we managed to squeeze in, and the kids went off to make vegetable sculptures and eat posh gelato.

Here’s the Brindisa stall, with the man very respectfully shaving aged parma ham while the food-savvy kids looked on:

And the children, recovered from their burger-accompaniment shock: 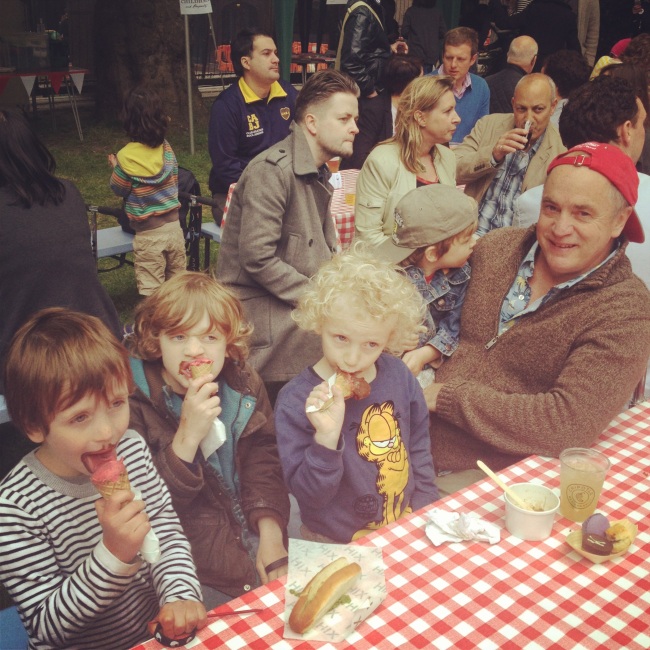 And both Mark and Ned dressed like toddlers in their backwards caps. 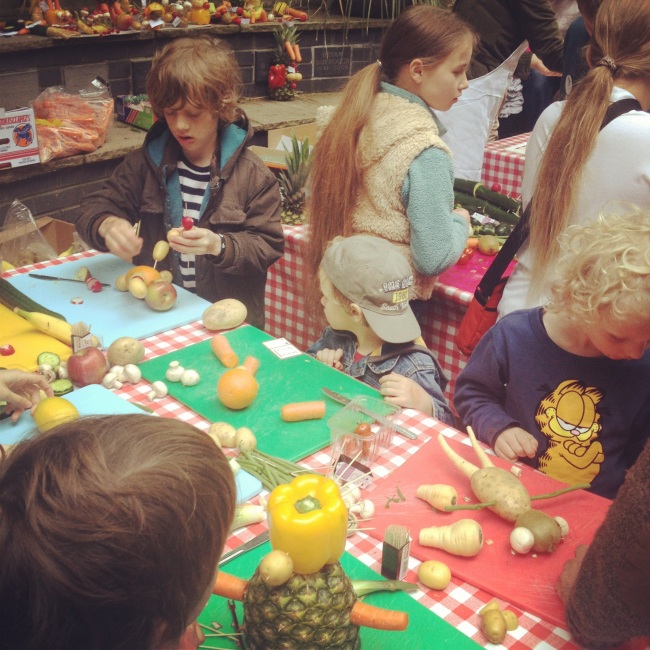 I tell you, those children are GIFTED.

Not only with a sharp knife, though, on NO! It turns out that they are clever little urban gymnasts too, in the manner of stylish French inner-city teens schooled in the ways of parkour cement mastery! Yes! So, we were a little late to leave for school the other morning, owing to some usual stupid lost shoe/staring at the tv/running into the bedroom at the last minute to find something no one has thought about in weeks/desperate poo/forgotten viola type scenario, and so we had to run a bit all the way, with the less-than-melodious accompaniment of my shrieking voice telling them to stop being so slow and passive-aggressive and thoughtless in the mornings, and then we passed the bit near the subway against the A40 which goes deep underground about a storey’s-worth, under Edgeware Road, and I’m running to the lights, and shouting, and then I notice that Casper and Noah are not beside me, and have disappeared. So I turn back, losing all those precious seconds I have gained while puffing along, and look for them, and see they are scaling the ledge above the subway, one hand over the other like a monkey, slowly, determinedly, one foot in front of the other along the thin ledge, careful not to look down into the concrete meters below them, trying to make their way to the other side of the tunnel so they can scramble over the fence and then eventually get to me. There was quite the crowd of commuters assembled, watching, horrified, and looking around for the absent mother who, by this point has turned the buggy around so fast in a rage, and tipped poor old Ned out, then chucked him back in, and ran back to the kids hanging over the ledge, looking completely surprised that I was there, and only a little bit worried at the murderous foam round my snarling mouth and my superhuman strength as I reached over the ledge and pulled them back over the side in a very angry way. Here is the subway:

And the ledge, and a tiny human swallowed up in the depths of the concrete Tunnel-O-Danger: 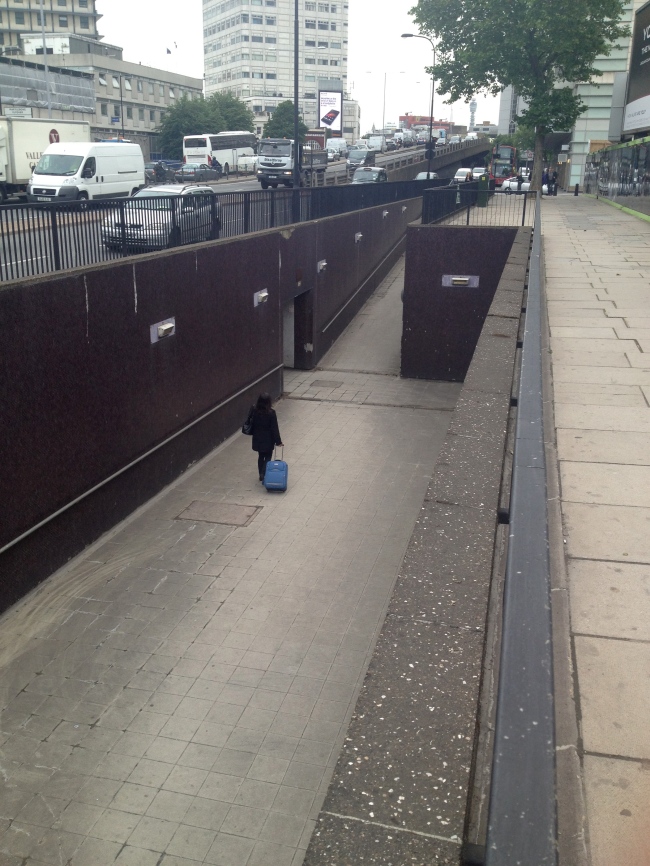 I was so mad I nearly popped my baby out.

The recollection of this makes me, in my caffeine-ed state, get all cross again. I am all for kids hvaing the odd accident, and a bruise or two is not necessarily a bad thing, and risk-taking is good for you, but there is a TIME AND PLACE. Not when it is 8:26am.

Anyway, I have excited myself too much and may very well need a lie-down with Casper The Sweat-Machine. Signing off x.