The flat is dying, and so are its innards. The boiler keeps turning off by itself, so the hot water runs out, and the radiators are working intermittently. The oven broke, so we have to have meals from the stove, which are confounding me and making the children nostalgic for fish fingers. The washing line has pulled out from the wall, so things are not drying, just getting stinky, like a wet dog. And the dog tripped me up a week ago on my early morning waddle/run, onto gravel just outside Kensington Palace, and I have bloody hands and knees and I look a little like a self-harmer.

But LOOK! the sun has been coming out a bit and I can now wear mid-warmth jackets. PHEW. Here is me at a wedding a few weeks ago with the dapper father of the groom: 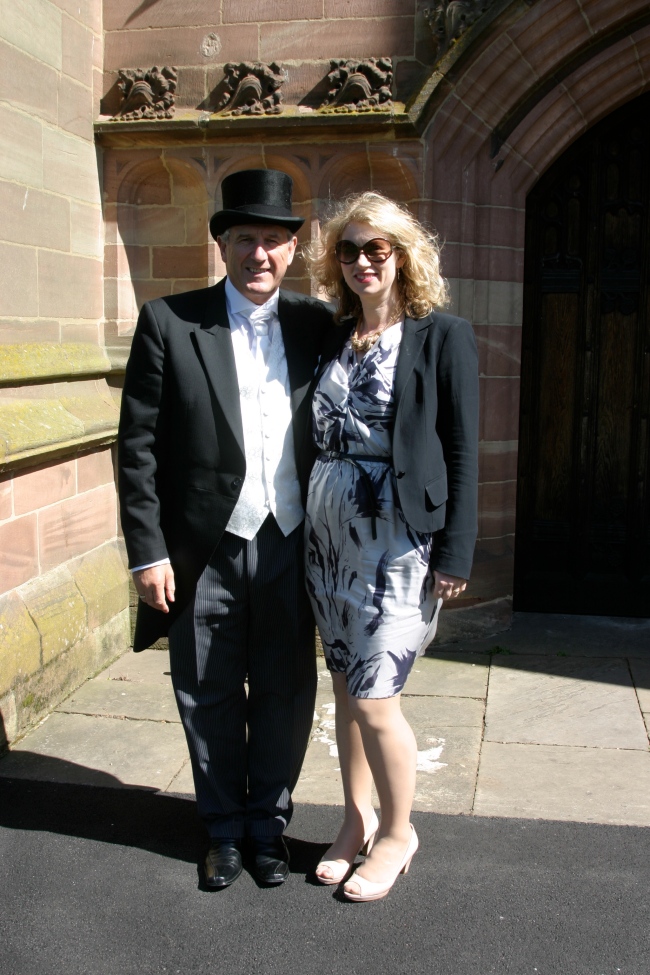 I mostly include that photo to show the sun, to show my 5 month pregnantness, and also to show my awful shoes which caused much hobbling and sadness and welts. I also have awful nude tights on, the kind that have a sausage-skin sheen to them. The wedding was lovely and all of the women wore long gowns or short cocktail frocks with salon-ed hairdos, enormous shelves of fake eyelashes, spray tans, huge, high shoes, wraps, and the biggest fascinators this side of Race Day. See if you can spot them: 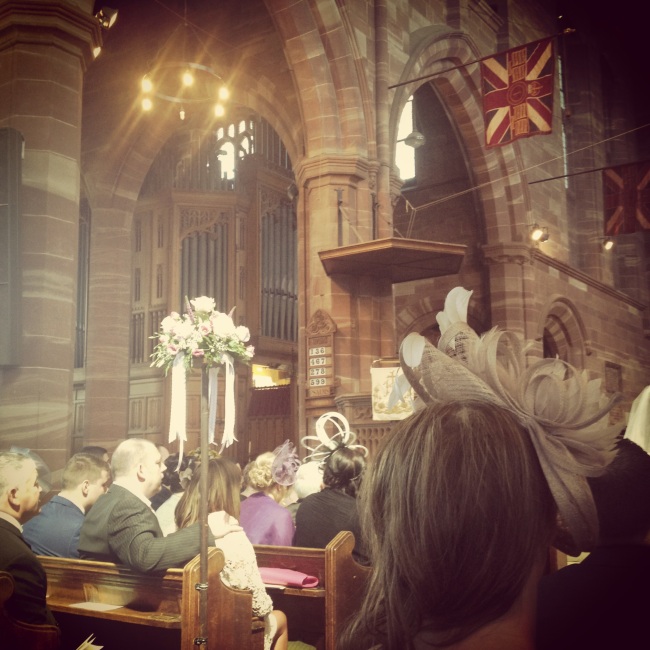 It’s not very hard. And we stayed here:

We are duck confit and braised beef and chocolate mousses with honeycomb icecream, and we were entertained by a video booth, pick and mix sweet table, disposable cameras, lipstick-and-loveheart lolly favours for the laydeez, hidden soprano singers, endless champagne, Marines in uniform, and a big communal breakfast the morning after. It is quite a different scene, this English wedding thing, after many New Zealand weddings where the local community hall is booked and everyone brings a plate to share for the wedding breakfast, and you do your own makeup and quite possibly buy a second-hand dress.

Its been a month of stuff like that, with the children being looked after by kind babysitters and extremely kind friends two weekends in a row. There was a wine-tour through the Denbies estate in Surrey (a cold, cold day with a bonus few hours after the tour where we ransacked the market town  of Dorking looking for antiques in between sheltering from the rain) and a day in Legoland and today, a magnificent thing – all four children were dispatched to school or nursery and we had a few hours off in Acton to drink coffee and eat cake! Here we are, all alone, and excited, sitting in the sun. (What you can’t see in the photo is a big piece of raspberry stuck to my top lip which Mark couldn’t see because he is useless without his old-man glasses and I didn’t notice until we had visited all of his friends and colleagues in the entire street). 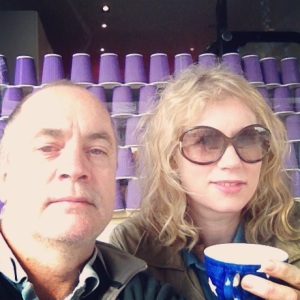 So Ned is going to nursery three mornings a week and I must use the time to be sensible and productive and not bid for Tom Ford sunglasses on eBay. Ned kind-of likes going to nursery, but weeps a bit first.

BAD THINGS THAT HAVE HAPPENED

1. On Sunday afternoon, while we were all battling with the bigger kid’s homework, Ned put a football into our microwave oven and set it on fire and once we had put out the flames, the communal alarms went off and made the neighbours stand outside their own flats owing to the noise until the landlord came to turn off the alarms, after about a two-hour wait.

2. The 20-week scan came and went, and the baby seems to have large testicles. So Mark thinks he could be called Jed. I said that that wouldn’t be ok, because it rhymes with Ned. He looked at me as if I was mental, and said that it was no different than having a kid called Noah and a kid called Ned. Because they both start with ‘N’. Its very hard arguing with that man, when he makes NO SENSE AT ALL.

3. The dog has turned from a skittish cute small fluffy puppy into a big thick mental untrained nutter. On Saturday morning after chasing a dog, while I was talking to a handsome man about (ironically) dog-training, Magic ran out of the park and into Bayswater Road, dodging buses and taxis, and tried to find his way home.  Some woman grabbed him and I ran after him, and there was quite the crowd gathered to see who was responsible for the cute, untrained, nearly squashed-on-the-road boofhead canine.

“He’s Mine! He’s Mine! I’m his incompetent owner!” I shouted to the assembled and disapproving crowd, all pregnant and useless-looking. It was deeply shaming.

GOOD THINGS THAT HAVE HAPPENED

1. We are going to Turkey for two weeks in summer to stay in a villa that has a huge pool, an outdoor barbeque, an outside shower, and is close to the lagoon of Oludeniz and the ghost town of Kayakoy. I can barely contain myself. There will be reading on the loungers and meals out and coffee and browned bellies and hopefully no earache like last time. Also, it would be good if Noah didn’t fall into the sea or the rapids.

2. The sample sales have been kind to me. The Stella McCartney one had knickers for £5 and bras for £10, and lots of terrifyingly well-dressed rich women who were talking about Aspen and New York and weddings in Tuscany. And it took an hour to queue to get in and an hour to queue to pay, but my underthings are so silky and new, it doesn’t matter. And a trip mid-week to Bicester saw me buy a Prada lace collar which, sadly, doesn’t do up. But it could, if only I knew how to sew things. Here’s the queue and a smattering of rich girls in their pilates gear:

3. Barnaby won a short story competition at school, and got given a notebook and a pen in assembly. He can’t remember writing the story, which I find odd, but we’re just going with it.

Casper, on the other hand, needs a haircut:

I’m now off to pick up Ned so we can hang out in the garden and not pick flowers or turn the taps on and off or pick all the figs off the tree. Wish me luck.

14 Responses to Everything is breaking