Usually, when I think it is time to post something, I think about what we have been doing and try to dredge something interesting from the photos I take on my phone. A recall, a bit of help from the diary, a bit of trying to remember, a bit of an exaggerated retelling of what we get up to. This time though, since my last post, we have been in the middle of having a kid in hospital with meningitis – a new kind of experience that has swallowed up everything, and left us all a bit shrunken and small and deflated and with a bit of the shakes.

In mid-term break last month, Barnaby got sick, and vomited and went to bed for days and days and didn’t eat or drink or move. The doctor said he had had a virus and would get better with rest. He didn’t go back to school after the holidays, but stayed in bed, asking to be lifted from his top bunk when he wanted to move to the couch or go to the loo. He had constant temperatures, he was asleep most of the day, he wouldn’t eat and wasn’t interested in drinking. He got skinny fast. NHS Direct said that as long as he was drinking, he would be ok, but it had to be monitored, and he had to be peeing, or else he would have to go to A&E. So he drank a bit more with encouragement, but still had temperatures and wouldn’t really move. Then one morning on his way shuffling down the hall in his baggy pyjamas and sweat-slicked brow he said that he couldn’t see anything – he was grasping at the walls and his pupils were dilated and he was panicking. We took him up to Paediatric Outpatients and they said he wasn’t going to be going home. He went in straight for a CT scan, and that night, once they found a contained cubicle for him in the paediatric infectious diseases ward, he was given anti-viral and bacterial drugs, an IV for fluids, a lumbar puncture and the tests began.

Small and skinny and sweaty and so tired. We stayed with him alternate nights, dispatching the kids to school and various friends, and we waited for him to get better. The doctors were trying very hard to identify what was wrong with him, and came up with viral meningitis and encephalitis, possibly caused by a dormant glandular fever or even (but not likely) TB. By the fifth day, he was ok to go home.

Ned came up with us to collect him after not seeing him for five days. They were very pleased to see each other. 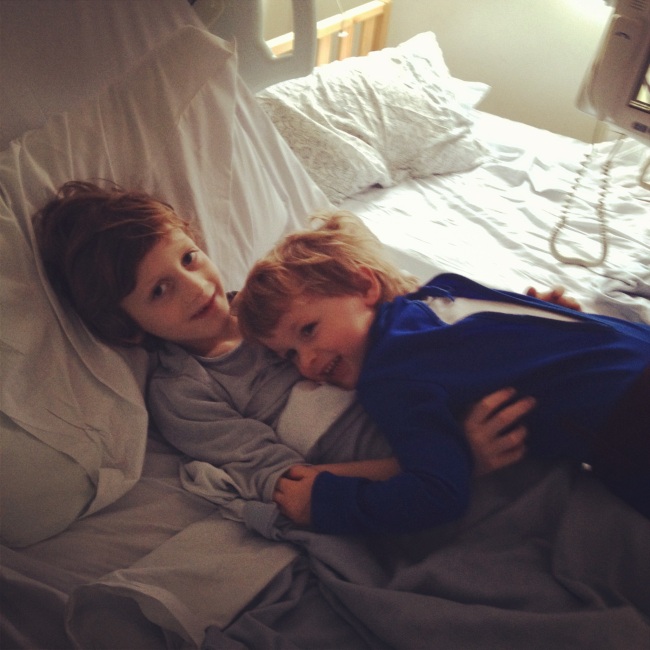 All the other stuff took a backseat. We are tired but very pleased to be back to normal life. Barnaby is back at school and managing well, and he is losing some of that painful thinness. It was horrible and hard and exhausting for everyone. I have a fresh perspective on stuff now, I think. And I am very glad my smart, tough and good kid is well again.

Meanwhile, we are all struggling through a repulsive Spring. Everyone is cold and wan and lined with wintery leathery skin and dead eyes. Even the dog is depressed.

Casper turned 5 today, and we went to Bramley’s indoor play area, which was just as well as it is snowing a ridiculous blizzard outside. Every year we have had Casper’s party in the garden. This year, we had to huddle somewhere inside for sanity’s sake. Here is Casper recovering from an altercation from a Dad who marched up to us all and demanded to have ‘a word’. I said ‘Yes?’ and he told me in a very angry way that his daughter told him that he had punched his kid and that was unacceptable and that if he couldn’t be controlled he shouldn’t be allowed in a public place.

Casper was hiding under the table, looking pretty guilty, and so while I was all outraged because I thought that there were better ways to handle this thing than coming up to me all aggressively and scary, I defensively apologised and asked what else he wanted me to do to remedy the situation. Mark very wisely began placating both the man and me in an impressive project manager stylee. Casper crept out from under the table and cried, very embarrassed and wounded, and then it turned out upon grilling the kids who were there at the time that the man’s kids were being annoying as well and it wasn’t a punch in the face, but a rogue ball in the eye, so I had to sneak off to the toilets to cry a little bit, before muttering lots of offensive swearwords aimed in the man’s direction. It is best not to cross mama bears, especially when they are a little bit unbalanced and four months pregnant. And the bescarfed man went back to his book, which was some uptight tome on the dangers of Vitamin K, and I shot him looks every now and then, and ate four slices of this to calm me down:

That’s Casper’s birthday cake, homemade, and a tiny bit mental. You are looking at a lot of late-Friday-Night obsessive liquorice-cutting and icing-related anxiety. But it was quite awesome. Not awesome enough for me to shake off the mean man though.

When you have a kid like Casper, who is prone to being a pain in the ass, who is impulsive and who gets silly and who playfights and fair thwacks his brothers, who hits first, thinks later, and who is generally a difficult child, what are you to do? Not take him out? Or take him out, and hope for the best, and get involved and apologise when you need to? And what about the man – he gets told some kid hit his kid – should he get steamed up and get at me, or should he tell his kids to keep away from the mean boy? Doesn’t this kind of thing happen in these indoor playgrounds filled with sweaty fiery kids who have been housebound for months? I think my perspective on acts of violence between kids has been a little bit skewed, perhaps. I suppose I think the man and his kids should have sucked it up and stayed away from the confrontation, if only because it’s the poor kid’s 5th birthday today.

Humph. Anyway. Parenting sucks sometimes. On that note, I’ m off to eat a drawbridge.