Hark! It is the school holidays again, and the house is filled to the most uncomfortable Victorian capacity not just with small boys, their assorted homemade-cardboard-box robots, their discarded night nappies, pyjama tops stuffed under couches, slowly hardening with dried cereal-matter, but also my new ebay ‘finds’. Ahem.

Witness the scene this morning, a morning in which we were all woken by Barnaby at an entirely unnecessary 6:09am.

The baby carefully removing the BBC Planet Earth DVD’s out of their cases, then preparing to rub them shiny-face-first onto the rug: 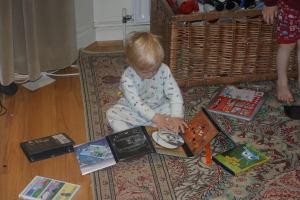 The ebay embroidery sampler which was clearly not embroidered in 1888, judging by the so-new-they-are-practically-fluorescent colours of the thread:

The ebay ‘silver-plated’ butter dish which is less actual silver, and more silver-coloured: 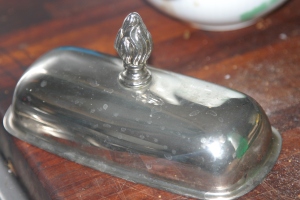 And the french primary school desk which cost £41 to buy, and £65 for postage. Post-war industrial chic-tastic they may well be, but they fit no one with a bum bigger than an 8 year old boy:

So. There you have it. My ebay Shame. My Housing Issues. My DVD Dramas. I spared you the photos of the nappies, usually peeled off every morning in the manner of an ill-formed burlesque dancer, slowly un-velcroed on one side, then the other, as the heavy damp nappy-squib slides down the small boy-leg, only to be grasped delicately before it hits the floor between forefinger and thumb, then lifted high above the small boy-head, and twirled rapidly until the g-force sends it spinning into the fruit bowl/shoe basket/someone’s unsuspecting head. EVERY MORNING. Then they tend to lie upside down on the couch, legs in the air, pantless, and staring into middle distance despite frightening grunts coming from me, ordering them to GET YOUR UNIFORM ON NOW! More middle distance. More grunting. A bit of swearing. Middle distance staring, absent-minded humming, etc etc forever and ever until I go properly mental, yell, sweaty and spittle-y and I dress them MYSELF.

Best to imagine that, really.

Anyway, this week we were asked in to see the kid’s school books and get an informal bit of feedback from their teachers as to how they are doing. Barnaby’s books were filled with stickers and praise from his teacher for his ‘wow words’ and complicated drawings of Superhero Chicken-Man and Royal Wedding impressions and stories involving trolls and scary forests. I was so proud I felt a bit teary, and on the way home from school, buoyed up from sheer relief that he is normal, and delight that his strengths lie in art and words, I promised he could spend £20 in Argos “because you have done so well at school this term”. Argos, I hasten to add, is his choice of on-line provider. It is really only Amazon for me, but word on the school hallways is that Argos does the best toys. So, who am I to argue the wisdom of mercenary six year olds?

Al I can say is, I know! I have NO IDEA where that came from. I can only blame it on the madness of the love’o’the’firstborn and the aforementioned relief. Outrageous. So, anyway, he ran straight to the iPad and ordered dragon eggs and a water pistol. Mark was a bit cross about my lavish arrangements.

Aaaaaaaand then we had Noah’s book-inspection, and the whole thing was quite a different matter. He got his £20 Argos treat because he had “tried so hard at school this term”, which, frankly, is the kindest and most polite way of summarising all of the blank books, scribbling and complete and utter disinterest/inability for learning ANYTHING AT ALL. Dragon eggs and a water pistol #2.

All of the dragon eggs and water pistols arriving through the post didn’t escape Casper. He asked for them too. So I have been trying to think of a way to either:

a) ideally, avoid giving him anything at all because suddenly everyone in the house is being showered with extravagant plastic rubbish, or

b) turn this into a bribing star-chart-type-opportunity to turn Casper into a nice child. Because, quite simply, Casper spends a lot of his time attempting to maim his brothers/friends/strangers.

And lastly, look at how my IKEA baby cups have colour-blocked themselves! They are like a plastic utensil Jil Sander advert, are they not?