Posted on February 7, 2011 by theharridan

Best be out with it then: Aveda took one look at my face and declared they wouldn’t touch my eyelashes. Because of the whole “that’s-weird-how-they-are-superglued-to-your-eyelids” thing. So I am still sporting them, and I still look mental, but now they are coming apart and slowly lifting off, but not enough to actually LEAVE MY EYES ALONE, just hanging there, looking a little bit leprosy-eque. Wednesday I am going back to them what did it, probably weeping, begging to have them off and to be returned to my former normalness. I am totally traumatised.

So, anyway, we have two things to discuss. Firstly, my cousin and his wife had a baby girl yesterday, in New Zealand, called Anna Josephine. She is their fourth child after three boys. I am delighted for them, and think that is an excellent name, but of course, it all leads me to wonder what I shall do if I never have a girl baby. What will I do with all of my stuff? Who shall I counsel about the dangers of the Eyelash Shop? Whose hair shall I (badly) plait, and who shall I take out for manicures and afternoon tea? The boys REFUSE.

Compounding the pain, I read an InStyle magazine article on the weekend all about Helena Christiansen. She has an 8 year old son, and the interviewer was at their apartment in New York, and Christiansen showed the interviewer her special wardrobe full of archived fashiony gems, bags and shoes and YSL frocks and all the usual fabulous things. But  – and this is the part that chilled me to my very core – these things were not being archived for poor handsome son Mingus. Oh no, because he is a small boy who presumably once grown won’t get into a lather about owning Herve Leger bandage dresses and various 2.55’s.

Christiansen said they were being archived for HIS FUTURE PARTNER!

Ouch, man. That sucks badly.Doesn’t Christiansen know she won’t like his Future Partner? And that said Future Partner will not be deserving of the legendary stuff, and she will be annoying and bratty and won’t fit them anyway? The General Rule Of Daughter-In-Laws seems to be thus: They are a bit horrible and don’t deserve your son.  Why does Christiansen not know this?

And I know this: my daughter-in-laws are NOT getting any of my cool stuff. Let that be written on my headstone. And, also, obviously, I need to have a daughter OF MY OWN. Preferably quite soon. Luckily, I have googled how you do it. After all, this is all very well: 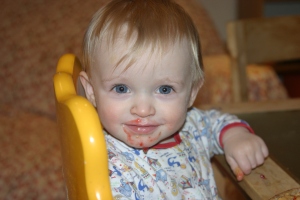 but it doesn’t solve the Archiving Problem.

The other thing I have to discuss is the disturbing and theologically challenging school-run discussion of this morning. It went like this:

Barnaby (scootering along the A40): Christians go in water, don’t they? Holey Water.

Me: Ah, not all Christians. Are you talking about baptism?

B: Yes! We saw a picture at school of John doing it. How many people did he put in Holey Water?

B: Yes, Jesus, too! Why did the people in the Holey Water have faces like this? [makes sour scrunched-up face]

Me: Um, maybe because the water was cold.

B: Cold? Why did they go in the cold water? That was mean of John.

Me: Well, it isn’t always cold. Sometimes it is as warm as a bath.

B: Do you have to wear your swimming togs when you go in the cold baptising Holey Water? Did Jesus?

Me: Ahh, maybe he wore his clothes. It was probably a river.

B: Did they go in the Holey Water to get clean?

Me: Kind of. Symbolically. Do you know  what “symbolically” means? It was to clean their insides. Sort of.

B: But how does the cold Holey Water get into their insides? Does it hurt?

And so on. I think I ended with “ask your father”, while yelling at Noah to hurry up, and wiping the tears away from the merciless rogue eyelash poking. I have no idea how to answer some of these questions. I fear I am about to be Found Out.