Ok, ok, I spelt “Christensen” wrong. Apologies to all pedants, and possibly to the Danes. I should have checked, but I have unshakable faith in my ability to spell all things right, all of the time. After all, my word skills were honed from a tender age at the knee of the very best wordsmith in the Southern Hemisphere (quite possibly THE WORLD) – my mother, who whips me at Scrabble effortlessly, again and again. She may not have taught me lipstick application, but she did school me in the dark arts of Strategic Word Play and Mostly Very Good Spelling. And so my public spelling-shame hurts me more than it does you, Dear Reader. Just so’s you know.

Anyway, there were some triumphs this week. Most notably the Rigby & Peller sale which happens every year just off Portobello Road. It is housed in the 20th Century Theatre, an old, ah, theatre, and it is full of Rigby & Peller lingerie and bikinis and corsets and Spanx and everything is so cheap it makes my heart beat a little bit too fast. So I got a year’s worth of bras and knickers (and one perhaps questionable bespoke 1970’s pink boned slightly mental and not exactly fitting corsetty thing that I imagined would make me look a bit like Madonna in her cone-bra Jean Paul Gaultier phase – which, er, doesn’t) that together were once worth a combined total of £824 exactly. And I paid the measly sum of £150. Oh, how my top drawer now overflows with mismatching lacy things! I would post a photo, but it may be straying into the too-much-information-about-your-intimates area. Or not. In fact, I took a photo of my racy hoard last year. Ahem.

Anyway, the other important triumph (which incidentally proves that I am both Young and Hip and a little bit Stylish) was that we went to see Mark Ronson at the Roundhouse in Camden. SO STREET. It was good, he was deliciously quiffed, and when Simon Le Bon and Nick Rhodes came out and sang “I only want to be in your record collection, wa hoo” I nearly passed out. But then there was some loud DJing and it was like 10.30 and we were a bit tired and my ears were ringing and so we snuck out.

AND WE MISSED BOY GEORGE!

There are no words to describe the horror of missing Boy George. No words. So you get a line of wordless despair:

Ok. I feel  bit better now. Before I go on further though, I have to just one more time refer to EyelashGate. Look at what two weeks of living with them did to me. Princess Wonky Eye from Big Haired NutterLand: 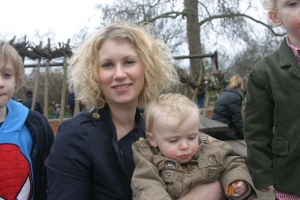 Needless to say, they have gone, and though I sport less eyelashes than I used to before I was MOLESTED by the eyelash shopgirl, I look like a normal person once again. PHEW.

Things I Regret This Week:

Yesterday I was at the lights waiting to go and buy more glasses for our Spanish Party Of Authentic Tapas From The Spanish Deli And Six Bottles of Wine To Taste (more on this later) and I came across a new baby with his mother and father and I asked how old the baby was and smiled and said I had four and then I weirdly followed them up the street sharing all evangelically-like about my Gina Ford love. The dad totally thought I was mental, possibly in a baby-snatching way.  The mum just looked tired. I really regret it.

Once back from my new-parent-stalking and laden down with the finest Marks & Spencer £1 wine glasses we got ready for our party. I wore this rather lovely 50’s dress bought yesterday in a ten minute trip to TRAID on Westbourne Grove: 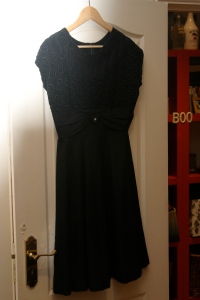 with a flower in my hair, 2 x Spanx and hold-up fishnets. TRIUMPH (although sitting down was out of the question).

And here are some photos of my tapas board excellence: 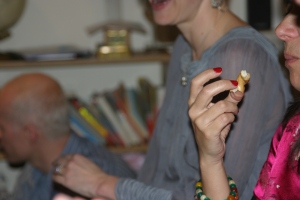 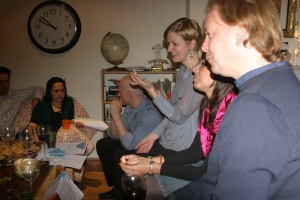 I was very bad at pronouncing “rioja” and I wasn’t very good at hosting the tasting game, and my cake had a latte cream on the top which separated and looked a bit vomity, but it was FUN! There was the Jackson Five and tales of South American jaunts and an enormous bottle of Veuve Clicquot and mucho red lipstick. It must be noted, however, should you wish to host your own Spanish Party Of Authentic Tapas From The Spanish Deli And Six Bottles of Wine To Taste that all that abundant joyfulness and deliciousness and conviviality leads to the driest of dry horrors at 4am. Just so’s you know.

PS The baby continues to be very goodlooking.