Here is an attempt at a post script from Tuesday night when I went out with the laaaydeeeez to Hereford Rd to have one last pork belly hurrah before I had another baby and had no time to eat (yeah, right…that’s SOOOOO me – prioritising helpless babies before I feed myself and the like…) Pah! Anyway.

Mark got home late, which meant that I was still attempting to fit frocks over my stomach. The boys were in the bath and I was in and out of the bathroom asking them what they thought. They said the Marc Jacobs wool sleeveless number was awful, they liked the Marni one (but I do not any more, something to do with the horrible neck slash), and I had been wearing my trusty polyester trapeze-shaped red dress all day and it had bits of roasted lamb juice on it – so that was no-go. I then revisited the wardrobe with Fresh Eyes and found a raspberry pink Parisian chiffon puffed sleeved number which I have never worn, and which is entirely see through, and which makes Mark sound a bit worried/stressed whenever I try it on – and thought that would be a most genius idea. The only problem being underwear – what to wear to cover my protruding bits and seem streamlined and elegant and not nakedy all at once?

So, in a MacGyver-like flash of inspiration, I improvised and put on my black maternity swimsuit, then black opaque tights (which are not easy to put on – they take a lot of coaxing, sweating, yanking and near-herniating), then a black slip, struggled on with the dress, found some heels, asked the boys, they said “Oh yes, mum, that is BEAUTIFUL like a princess” and then waited for Mark to arrive.

He felt differently about it though. In a nervous sounding voice, kindly and wavering, he said “Erm, you look a little like a pregnant call-girl, darling. I am not sure wearing what looks like a black rubber catsuit under a filmy negligee is quite the right look for you. It may be a bit inappropriate in a posh roast restaurant. But, ah, I don’t know…” (looks away, sweating…).

So, I look again in the mirror and see that the children and my addled pregnantness have put me wrong – he is right, I have crossed the sartorial line. But it is 7:45 and I am supposed to be there at 7:30. And putting up those tights took a long, long time. To get changed, I have to get out of my swimsuit as it was doing very unattractive things to my cleavage. What to do?

I took drastic action. I cut myself out of the swim suit. I grabbed the IKEA kitchen scissors, yanked down the tights, and cut the crotch in two, slid out of the togs, tossed them in the bin, found my purple Prada-esque lace prom frock, covered the side-split with a belt, and ran out into the waiting bench-seats of a taxi. It was all a bit uncomfortable, but no body-parts were harmed in the end. The taxi then took all the wrong turns and I ended up arriving 40 minutes late, almost entirely unsupported from an undergarment-point-of-view, kind of sweating and more eager for a drink than I perhaps should have been. Once again, #eleganceFAIL.

Well, what I thought I was going to write about was a list of the Things That My Children Do That Are Annoying.

The list is long, and morphs from one thing to another on a frequent basis. Currently, the top of the list is

1. Play with the toilet.

This guy here, once so pliable and nice:

is now a Toilet Brush Obsessive. And when I go to the lengths of hiding the toilet brush, as I did tonight, he just hurls himself into the toilet bowl and swishes around.They all go to bed at the same time, and the other two who Know The Rules only muck about for a bit, but Bad Custard is hellbent on getting some (admittedly rare) attention and so he goes swimming in the loo in his pyjamas. It is KILLING me.

2. Swinging off the curtains.

They (especially Bad Noah) swing absent-mindedly on the curtains. The curtain hook things break and the curtains no longer work. I am a sewing imbecile and so the curtains stay limp and forlorn and broken. It has happened in their room, and is now happening in the living room. It is KILLING me.

3. Biting into apples them leaving them strewn. 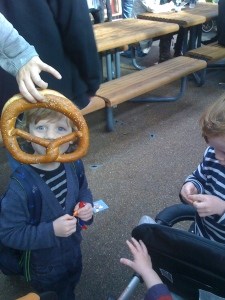 I know that I have illustrated this annoying trait with a muffin and a pretzel but you have to use your imagination.

I put a big, full, lovely fruit bowl out on the table so that they will help themselves and eat fruit often. But Casper has a banana-peeling fetish and Noah drop-kicks the extra large naval oranges and Barnaby eats a few bits of an apple before declaring them “dirty” and discarding them in unused-corners of the flat. I am TIRED of this.

That is all. I am momentarily purged.