Tis the day after Christmas, and we have settled down to watch The Sound of Music, which is exactly the right thing to watch on Boxing Day, as everyone in the entire world knows. But I have just poured hydrogen peroxide into my eyeball, so I am less watching, more squinting and wincing with watery-eyed pain. We have been out at the park, frolicking amongst the mud and hungry squirrels, but that surprisingly sunny excursion was unfortunately topped off with a desperately wrong lunch at Pizza Hutt. I am culinarily defiled. You see, today has been a day of extremes. In fact, the whole Christmas break has been a mix of good and bad. A list, if you will:

The bad: I was given the Least Number of Presents On Record Since 1977. Now, I fully appreciate that I am supposed to be above this terribly childish pouting. But I am not. So I wept a little on the inside as I was handed an unwrapped Dirty Dancing cd (what – ten years too late?) and counted about three presents in total under the tree for me to open – mostly from my lovely sister-in-law who knows the value of a slab of Rocky Road – but cheered when Mark agreed to letting me buy a new Mulberry Mabel. For the record, I solemnly vow not to burn this one on the top of the stove.

The ethically questionable: I was given some pot pourri on a gold tray. I would like to give this one straight to the Trinity Hospice charity shop. But the giver is someone who frequents the flat weekly – and who will do so for the foreseeable future. Do I HAVE to keep it? Do I HAVE to use up rare and valuable shelf space for pot pourri? Can’t I just Never Mention It Again and hope the giver doesn’t notice? I am ethically confused with no love for dried foliage.

The good: We had a party on Christmas Eve. We had 10 adults quaffing champagne and scoffing brie en croute and 12 kids screaming around the flat dressed variously as Batman, the police, and Mrs Claus-in-a-scanty-nightie. The ham was good, the egg nogg apparently excellent, the clean-up very quick. There were only two fights between the children resulting in tears – and they were my kids so I didn’t mind.

The bad: Noah did a poo on the floor of his room mid-festivities, but luckily it was artfully placed on a shiny Maisie book and so slid off terribly easily. The kids didn’t seem too bothered, although did keep a wide berth from the bookshelves. The bread rolls were left in the oven and so lacerated the gums of all who dared to eat them, and we had only two champagne glasses. The mackerel pate, while wildly successful thanks to Stylish Liz, left a fish-smell-residue on everything in the dishwasher, and I spilled the ripe juice from a huge wodge of gorgonzola down my dress before everyone arrived. I smelled like sick for hours.

The good: The children slept in until 8:45am. Weird, but like a Christmas present to us in itself. We did not feel very hungry owing to the party the night before, and so had hammy-leftovers and low-key Christmassy things instead of eating like piglets. The kids were happy all day playing with their stuff. There was no pressure, and it was very quiet.

The bad: It was a little too quiet. And we missed our mums and dads. And it didn’t snow.

Right. So, here is a photo of Noah dressed as a Villager in the nursery play (the one in which he had a kip midway). He is minus the headscarf, and showing the camera a wooden ball he later nicked: 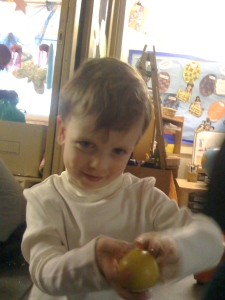 This is the children getting driven around Seymour Street in Cinderella’s pumpkin coach a few weeks ago. They all subsequently fell to the floor in a slump as soon as the horses took off:

Here is us at the work Christmas party at the Tiroler Hut about to be fed mountains of pork knuckle and assaulted aurally by cowbells and bad versions of Edelweiss. mark looks suspiciously Eastern European but I swear he is not. And I am in my gorgonzola frock: 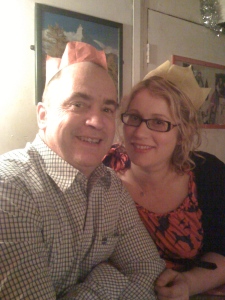 That is all. Now back to watch the Germans hunt Maria and Georg down.