I have a very healthy relationship with charity shops, forged when my mother would take me to the Salvation Army’s Nearly New Shop for a rummage in the ’80s, back when I was small, skinny, and before my mullet got out of hand. When it was a perfectly reasonable Pageboy haircut, before puberty turned the shaggy shorter bits at the front into a big permy-looking halo of shame (I can’t find any photos of the actual mullet, but this is a marvellous one of me in my high school with HUGE glasses that you can have instead):

Anyway, we would go, mum and I, and look around and though everything smelt bad and it was dusty and dark, it was laden with potential second-hand toy treasure. Later, when I was at University I bought many ’50s party dresses from retro shops on K’ Road and wore them to parties and for the occasional spot of dancing at The Box on High Street. In London, I’ve squirrelled out discarded YSL, Givenchy, Chanel, Isabel Marant and Christian Lacroix from various op shops and all sorts of peculiar sweaty smelling polyester frocks which can look quite designer-y if you choose well and which accommodate a burgeoning pregnancy bump as well as never crease. I know well of what I speak here.

There’s a great little Trinity Hospice shop near Queensway tube that often yields treasures, mostly from the book bit at the back. On Remembrance Sunday, I took half of the children for a walk to Notting Hill Gate so they could buy 10 donutty beignets from Paul Bakery, and on the way the Queen drove by us in her Bentley. We stopped and waited for the police escorts to send her through the streets and we were all in awe at her oldness and her realness and how close she was to us and our dog. Did she see Magic? Did she wave at us? Was she wearing some sort of diamond headgear? It was all too much queenly excitement for us all and we could only calm down by eating all the beignets.

Once we were over the drama, I went inside the Trinity Hospice shop to look for mid-century modern coffee table books or perhaps an unnoticed vintage Cartier ring while the kids and dog stayed outside arguing about Manga comics or something equally stupid. Then Noah came in and asked me in a breathless kind of way where Elton John lived and I said:

I DONT KNOW – MAYBE WINDSOR? MONOCO? – ANYWAY GET BACK TO THE BABY PLEASE

And ten minutes later, me laden with more books and a Juicy Couture tracksuit (more on that later), I exited the shop and went over to the kids lolling about in the bus stop and Noah told me that Elton John had just patted the dog. I said, looking frantically left and right for some signs of an ageing pop star with big glasses and a toupee:

WHY DIDN’T YOU TELL ME?

And he said that was why he needed to know Elton John’s address and anyway, that was a whole ten minutes ago. We googled lots of photos because, having just seen Rocketman, I wanted to make sure that Noah knew Elton didn’t look like Taron Egerton. It turns out that Elton does indeed live in Holland Park a few roads away from where we were and Noah remained steadfast. It was Elton, he said. On the same day as the actual Queen! I really do love London.

It has taken me 20 years to know that my happiness was going to lie in blue velour and diamantes. I am going to live in that little tracksuit number all Christmas. I might wear it out, even, with a BOOT or a HEEL. I am going to be the warmest and the chicest track-be-suited mid-40-year old in all of Devon, I imagine. Never mind the diamantes have come off a bit! Never mind it is snug across the bum! Never mind the children will be embarrassed and I am twenty years late to the jazzy tracksuit party! There’s a latent second hand 20 quid Juicy Couture princess in all of us, I think.

In Further Clothing and Accessory-Related News

I was out at The Cleveland Arms on Monday night at the pub quiz (as is our usual wont, and we very often win) and someone noticed my scabby wrists caused by the nickel allergy from the birthday Gucci watch. They said:

GET RID OF IT IF IT MAKES YOUR WRISTS ALL RASHY

and it was like the heavens opened and the angels sang and shone their light onto my atopic skin and I realised that yes, it was time to release my allergenic timepiece into the world of the potentially resold. It’s currently listed on eBay, as is my green £4000 Mary Katrantzou ball gown that I was going to wear to the book launch but which makes me look a little bit fatty in the arms. I will sell both those things, even if I die trying, and I will funnel the proceeds back into my paypal account so I can keep bidding on terrible 80’s YSL two piece skirt suits to wear to my non-existent office job.

Here is our new Petra Borner rug which has brightened up our lives and given us quite a bit of shedding wool to manually pick up once or twice a day:

The baby, being a bit odd:

Most of the others on our way to Portobello Road on Saturday looking quite odd as well: 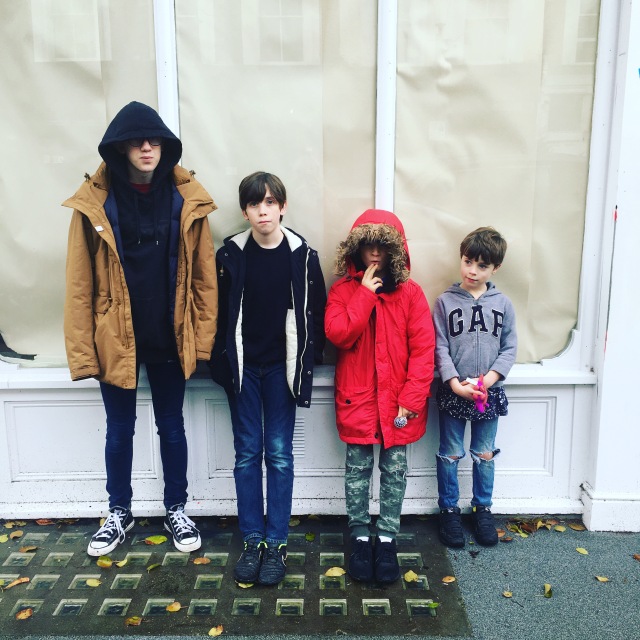