Might Be FREE AT LAST OF THE MEAN LADY

So – I think, I am sure, that today I have filed the content for the most miserable work project with the meanest client I have ever had. I have never really had a horrible boss – there was the coke-fuelled one who made me redundant at 6 months pregnant and who made me cry for taking a lunch break on press day, but she didn’t seem to have a problem with me *as such* – she was just a very brainy, unhinged and hangry narcissist with a penchant for shagging many of the unavailable men in the office and ignoring her husband. Pfft – we’ve all been there.

This other one, however,  seems to really dislike me (even though we have never met in person and she has been happy with my writing for nearly a year) and has been decidedly weird about me being pregnant – WHY DID I MENTION IT? There is no sisterhood.

She has managed, through a process of mostly ignoring my emails and then getting angry about them by way of passive aggressive messages, sarcastic comments about my grammar and a subtle derailing of all my confidence in my ability to write, TO MAKE ME CRY QUITE A BIT. But – (and I expect I am getting excited too soon, because nothing suggests she will accept the work I have just done with anything other than anger and unkindness) maybe it is finished and I can remember about the joy I used to find in my life. I would like to go about the world unburdened by the heavy warty Toad-Of-Work-Related-Despair which has been sitting on my shoulders since late September. Oh! To no longer have dreams featuring spreadsheets and pie charts! To open my inbox and see only kind people and sample sale invitations have stuck something in there! To no longer be cc’ed into emails where my inability to write anything interesting is discussed. It is my dream – and I can only hope I am not asking too much.

Meanwhile, the dog nearly died when he stole an unopened £8 Waitrose fruitcake from the kitchen bench while I was having very serious words with the teenager about his behaviour and then confiscating his phone. We emerged from the bedroom, Barnaby was shut straight back in, I came out into the living room, all hot and sweaty and angry, and found the cake (what a cake! the perfect cake to eat with tea of an evening, while you lie fat and pregnant on the couch, full of acid reflux but still desirous of cake, watching Glow, drinking tea, unable to move) all gone and the dog looking a bit ashamed. The other kids had not noticed the dog and the cake apparently, faces deep into modelling clay and youtube videos. The next morning I made a tiny little instagram story about the dog, whose belly had gotten quite round and whose eyes looked a bit sad, and made a poll about whether eating a whole fruitcake would actually kill him. It turns out that – actually, because raisins cause renal failure in dogs – it might very well have killed him. No laughing matter, fellas. So after many people hastily sent me messages explaining that he was probably going to sadly die, I took him to the vet and they sorted him out.

Who knew the inherent risks of Christmas-time fruitcake? I thought it was just chocolate but no – beware of raisins and grapes and avocados, too – there’s a whole list of toxic foods for dogs, and in all my years of (quite casually, really) looking after a dog, it turns out I knew nothing of this. So Magic spent quite a few days lying on the couch (no change there for him or me), drinking a lot of water and shunning his food, but it was less than a week before he was off scarfing rotten chicken bone carcasses from rubbish bins and bits of very old Subway sandwich castoffs from the side of the road. He has a stomach like a…cast iron oven or something? A vice? A truck? What do you say when you mean that Magic, the furry fat little dude, can pretty much eat anything foul and poisonous and can still bounce back looking a bit peckish?

Face is cute though, and he smells nice, like toasty wheaty biscuits and warm feet: 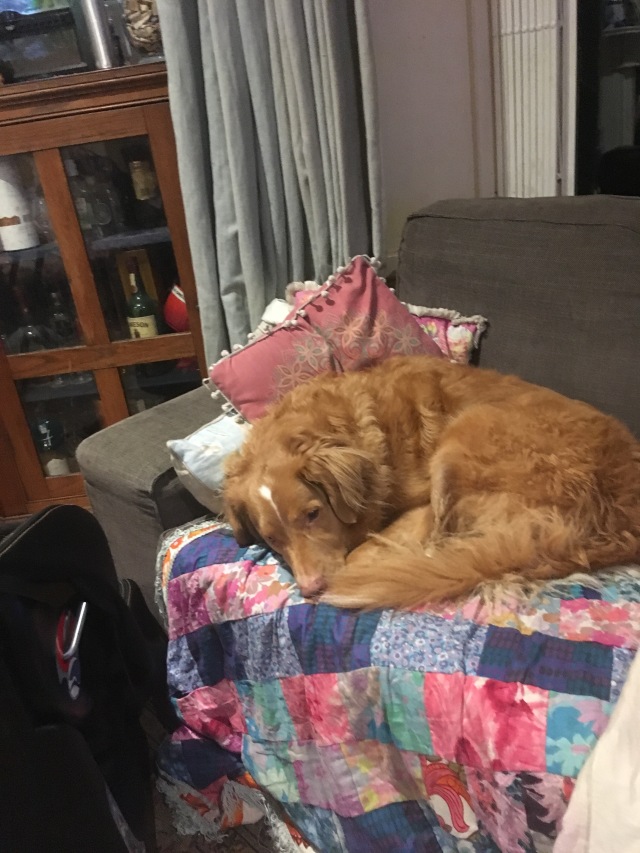 A few nights later, Magic came out of my bedroom reeking of Chanel No. 5. I raced in there, and found all eight vintage half-filled bottles (I know, it’s a weird eBay ‘problem’ I have) had disappeared, but the smell was very strong. I looked under my bed, under the covers, behind the bed, in my bags, in drawers, and finally found all of the Chanel bottles (but not the Tom Ford or the Prada perfumes) shoved under my dresser in a nice line. One of the stoppers had come off and both the carpet (and the dog, because he nuzzles into the small space between my bed and dresser) were drenched.

Who did this, I hear you cry? Well, there is only one man in the flat who is partial to a bit of fancy 50’s vintage glamour, and that’s Otis, the Human Magpie Of My Nice Stuff. He was asleep, and I was a bit mad and weepy and sick of people touching my stuff, and so I wanted to haul him out of his bed and interrogate him but Mark wisely said no. In the morning, I asked him about my perfumes and he denied all of it, looking very hurt that had accused him of any kind of blatant and disrespectful Chanel No. 5-related theft. I kind of believed him until he said he had seen Magic climb up onto the bed, read the labels and take them into his hiding place. He just went too far – I think it was the reading bit, or the absence of Magic’s opposable thumbs that confirmed it for me.

Clay modelling – this is why the kids didn’t notice about the near cake/kidney/dog/raisin-disaster (photo taken by Human Magpie Otis as part of a series of Mostly Blurry Living Room Montages) :