Posted on September 6, 2018 by theharridan

We are back from Turkey, which was two weeks of warmth, swimming, figs, sheep’s cheese, olives, milkshakes, canyons, boats, reading, and an extraordinarily excessive amounts of barbecued lamb. I am brown, the kids have new, enchanting sun damage spots speckled across their shoulders, and we have 5 packets of turkish delight in the fridge waiting for me to single handedly eat them on the DL. We have a new kilim rug under the kitchen table – a source of marital discord because one of us doesn’t like the way it will get dirty and the way it makes scraping your chair in and out kind of textile-y and tricky, while the other one is screaming inside her head (BUT IT DOESN’T FIT ANYWHERE ELSE BECAUSE WE LIVE IN A TINY FLAT FILLED WITH YOUR WEIRD HOARDINGS WHICH INCLUDE TWO CARDBOARD BOXES FILLED WITH 80’S CASSETTE TAPES THAT YOU PULLED OUT OF A SKIP THINKING WE WILL EITHER SELL THEM ON EBAY FOR A FORTUNE OR THAT WE WILL LISTEN TO ONE DAY WHEN WE STUMBLE ACROSS A CASSETTE PLAYER BECAUSE YOU DON’T UNDERSTAND STREAMING MUSIC) but, silently, in that firm, terrifying way of a woman who is a bit pregnant and a bit cross – and so it is staying there. We also have a new/old Turkish rug that we put into the kid’s bedroom which currently doesn’t have any wee or ground cake crumbs on it. It’s day three, though, to be fair.

See new/old kitchen table kilim to the right and the new/old Turkish kid’s room rug on the floor below. See the piles of carpet one has to go literally through to make a new rug purchasing decision? Out of shot is the tiny dog which kept trying to hump me.

This is Otis and I climbing up St Nicholas’ island after he stubbed his toe and lost his toenail. I carried him a bit, but at 5 months pregnant, it got pretty ouchy pretty fast and we gave up. That kid is tough though – until the nail smashing episode he was up that steep ruinous mountain like a goat in a victorian swimming costume: 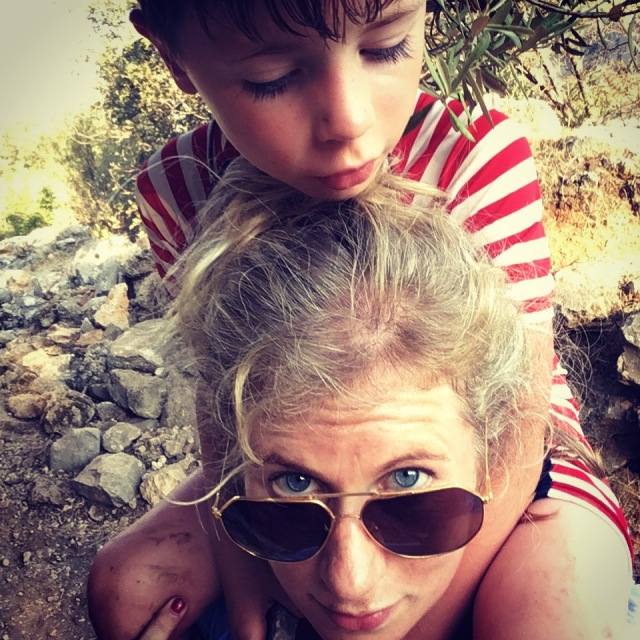 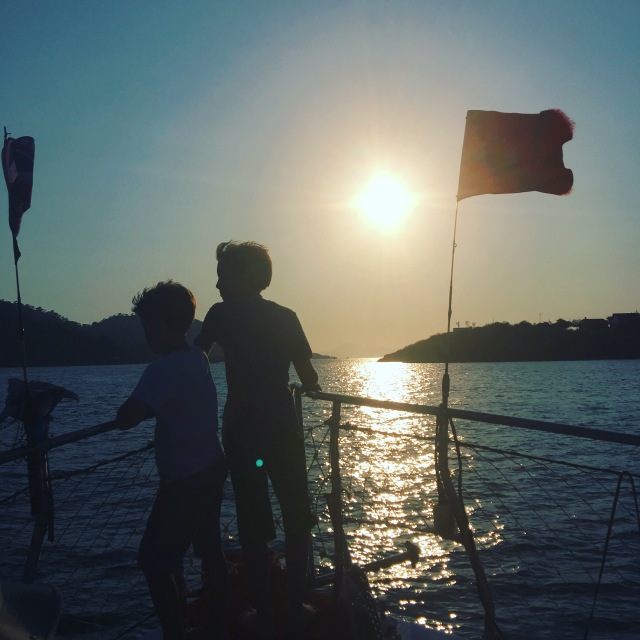 Saklikent Gorge, where we met a sea snake, Amanda smashed her knee, and Mark knocked Noah into Otis who landed into the freezing water and freaked out, complete wth compulsive shaking. Pre-adrenaline rush, below:

Kidrak Beach, where the Shoulder Drama began (more on that later): 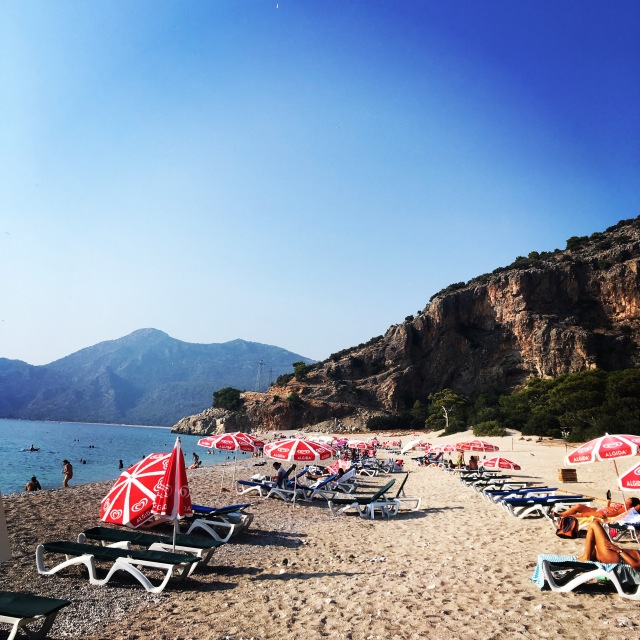 The water. THE WATER!

Melancholy Otis-face to suggest the sad part of the tale:

As a preface, it important to remember that I am not good with the sick and the ailing. I am impotent, bored, impatient, unkind, and entirely unsympathetic if someone has something wrong with them. This isn’t great, I know – it will certainly be on the list of things the therapists will be told when the kids finally crack. I suspect it has something to do with the fact that my parents don’t take a fuss with illness – I have been taught to suck it up and get on with it. I find any wallowing to be anathema to me – I am cold and hard and mean.

So, two weeks before we left, Mark got a virus which made him snore. For these two weeks, I was finding myself out in the lounge sleeping on the couch, cranky and not-very-amused. Mark felt guilty but couldn’t do much about it and so we just did a tired-eye-resentful-marital-dance around each other, not really bringing the snoring situation up, but snitching and scowling at each other in a vague non-reference-reference to it. I was getting anxious about not sleeping, and he was getting sick of feeling like he was a Bad Guy. And he said the snoring hurt his throat and DIDN’T I UNDERSTAND THAT? I’m like, no. I am deadly silent when I sleep. Like a silent considerate angel.

We went to the doctor together before we left and The doctor suggested that perhaps Mark has sleep apnoea which would explain his constant tiredness and loud, alarming, almost-comedy snoring and we talked about the sleeping mask you have to wear and I felt decidedly uneasy about the future. The doctor gave him strong drugs and an inhaler because he said Mark had developed a chest infection as well as sinusitis.

So we arrive in Turkey and he is still snoring and we are playing musical beds to get away from each other and then he goes into Medical Breakdown. The list of ailments is as follows:

Some of the rest of us have stomachaches (perhaps constipation, perhaps homesickness) and earaches and deafness caused by the constant swimming, and Casper develops his usual holiday heat rash which covers his torso and underarms and peels his skin off, and he gets stung twice by a jellyfish. He then collapses at the Tuesday Fethiye market after complaining of the smells at the spice stall, going yellow and retching. He is taken to a taxi hut, given water, someone sticks his legs on a chair, and someone else fans him. His hands are held and his hair is stoked by someone other than me because I freeze and just watch. An ambulance is called and he is whisked away to spend the day on an IV drip at a private hospital for £250, because it turns out that you have to drink water in a hot country. Apparently, playing Sausage Run on an iPad all morning in lieu of eating and drinking might well cause dehydration and heat stroke.

I am a bad person, I know. All this illness makes me want to walk away into the mountains and never come back. I will be like a cave woman, like Ayla in Clan of the Cave Bear, being awesome on my own, being tough and living in a tidy dry cave with great abs from the self-sufficiency and a happy heart because I have no one to update me on their health status. Sometimes a handsome caveman might visit, but not for very long. I would mostly eat scrambled eggs from my chickens and a garden. No kids? No kids.

6 Responses to Medical Dramas ‘R’ Us