I’ve been having a hiatus (an hiatus?) because of this new work malarkey. It has been a bit trying, I have to say, because I have had to relearn how to work a PC. This is a slow and awkward thing. It feels like being back in the dial-up age – the cut and paste works funny and you have to open your computer using control, alt, delete. But could I find ‘delete’? No. NO! It wasn’t very obvious, to be perfectly fair. Hidden in plain sight, you might say.

So on my first day, one of the very kind permanent copywriters who was tasked with showing me what to do had to watch me try to find the delete button, sweaty olden day hands hovering over the keyboard, quite lacking in conviction, while he willed me to find it and find it quickly so he could go back to doing his own work. It was a palpable force of good intent – FIND IT, FIND IT, LADY! FOR THE LOVE OF GOD, IT IS JUST TO YOUR LEFT! went his eyes and his aura, and I was right there with him, wishing it were all over and I could go and have a cry somewhere. The pain of being a new starter has quite the run-on effect, as I am sure all my ‘helpers’ would attest. I just forget stuff a bit. It must be my middle age, or the deeply rubbish IBM system which embarrasses me with its clunk and constant errors, not all of which have anything to do with me.

There are all these file paths too which seem to be unnecessarily complicated, with 80 style guides hidden in mysterious places, and you are supposed to refer to them, but you have to find them first. But I don’t have time, because I am slow, and like to research a little bit about the designer who bothered to make another crisp white tee, otherwise you can’t add much to the copy. So if each time you do a bit of googling and each time you try to come up with a fresh way to write about pretty much identical stuff, then the ten minute time frame you have allotted to write about your product gets eaten into, and before you know it, it is 10:15am and you have only written about three things and OH MY GOODNESS you’ll have to work through lunch, ignore the whats app texts showing you photos of what the school dinners look like on any given day (purely for quality control reasons) and you start to forget to go to the toilet.

Your copy gets a bit erratic, shifting from horrible stock phrasing (‘take your traditional t-shirt styling to a contemporary level with this camo print’) to drunken-rant-sounding stream of consciousness nonsense (‘if Stevie Nicks had a cloth baby with Kate Moss, it would look just like this woven wonder jumpsuit with added pocket detail that will make you scream with restless-hands-related-delight…’) and you get a bit dizzy, but can’t make a cup of herbal tea because you are scared of all the people standing by the kitchen. And you realise that you will have to work for two hours longer than everyone else has left the building just to finish your allocation, and the lights keep switching off and the cleaner is vacuuming under your legs, and then you have to write about a belt but you just can’t find any information on it so you have to go on about it having an adjustable fit. That’s right – this belt has an adjustable fit. Also punch hole detail. As in, it has holes in it so you can do it up.

GROUNDBREAKING PIECE OF WRITTEN WORK, THAT WAS.

And you do your maths and work out that, because of the no lunch and the overtime, you are paid less than your cleaner.

Not On The High Street invited me to an International Women’s Day breakfast at the Hoxton Hotel to hear some entrepreneurial women talk about imposter syndrome being a little like a secret weapon and the uselessness of guilt. One woman said something about how hugely maddening it is to be working but still have to do all the domestic crap, and then everyone got quite noddy and a bit angry. I did too, although Mark as been a trooper during the new J.O.B crisis, feeding the children (a bit late) with salmon and rice (no veges though) and I have been trying to say ‘thank you’ and not ‘why so late and would a bit of broccoli on the side be the undoing of you, eh?’. There has also been a rather cocktail-heavy restaurant review at Pomona’s in Notting Hill where we wisely made friends with the barman. More fake-expert mothering advice right here, and something on never leaving London here.

Amanda and Josh came from New Zealand to stay on our couch for a week and we went up the Sky Garden for views and five hot chocolates that cost £20: 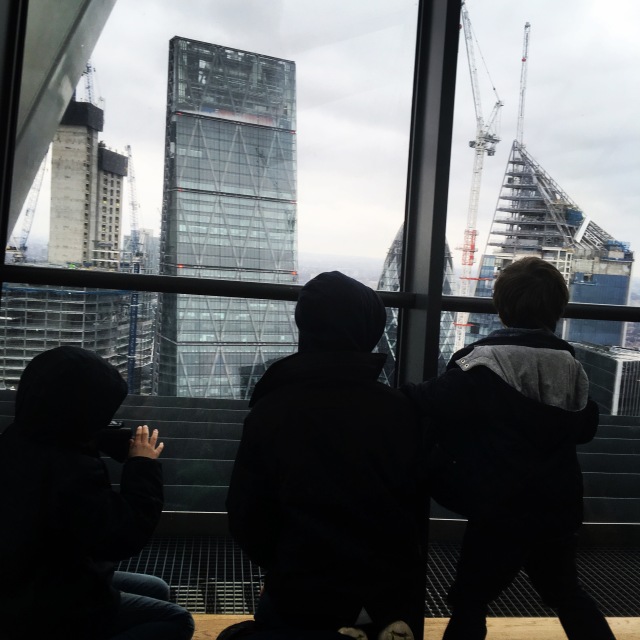 See my quite sweet optimism here, full of love and pride for my disinterested, grumbling tribe of boys:

After, we got lost in the City, battling the mini Beast from the East, walked up the 315 steps to the top of the Monument while Mark held the fort at the bottom with some craft ale and a heater, and topped it off with hamburgers at Borough Market where I went apeshit because Ned stole Otis’s fries, so I went to his little heap of fries and stole them back, but squashed them all in the process so Ned also went apeshit and pushed a chair over and the lady asked us to leave. Here is my cold face attempting a jowl-free angled selfie in the freezing cold: 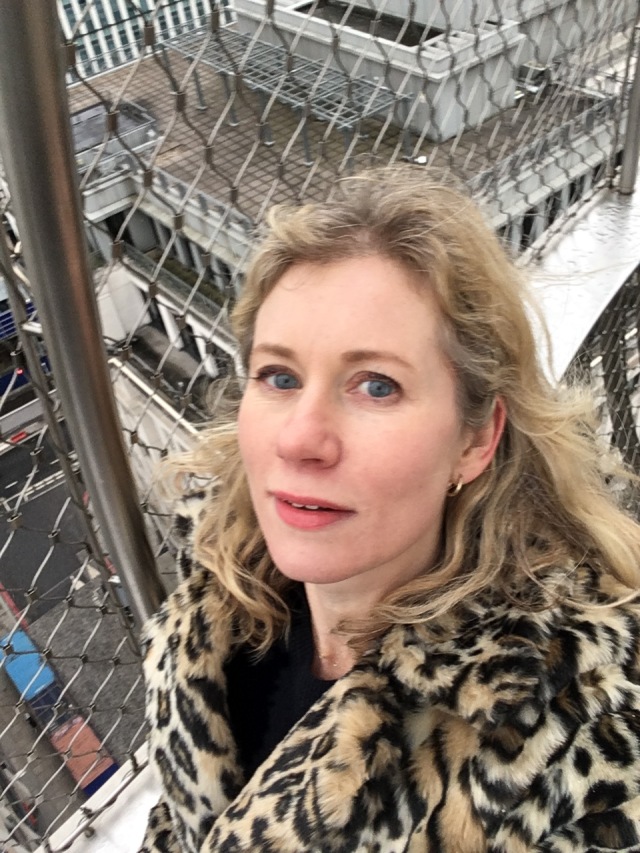 Mark and Barnaby have left for three weeks in New Zealand, so we are all currently luxuriating in the spaces they have left – my bed is now sporting a massive duvet, usually not allowed because *one* of us gets a bit hot, while the children cannot believe that they can go near the playstation without Barnaby punching them in the throat. The food we eat can have some sort of cheese component without Barnaby gagging and we don’t have to listen to Mark tell us that one of us has taken his glasses/keys/wallet/phone. We might well miss them, but I doubt it.

If you’re reading this – LOVE YOU GUYS! Don’t kill too many small animals like you did last time, and I promise Magic isn’t allowed to sleep on the bed, tucked up on your side like a sweet fat hairy husband-replacement. Nope.

Finally, Otis and I went to Tiger and got a glue gun, and the boys came home last night and made him this to wear for the nursery easter Bonnet Parade. To say I am proud would be quite the understatement: