We Took The Wine

There have been no repeat threadworm infestation and so I am JOYOUS. Joyous that you can get a pill from your Boots (the family-sized box comes in pills of four, so we have to buy double what normal people buy) which is the most magical bottom bomb and the worms get tortured by it (I like to think they do, anyway, like some sort of painful Agent Orange for Parasites  where they die a really painful death, the memories of which get stored in their DNA and so the next time their relatives come near our house they start involuntarily trembling with inexplicable tiny wormy fear) and then they are DEAD and hopefully no one in your massive family have accidentally stored tiny worm eggs up into their fingernails, only to nibble on later and ingest and the whole thing starts again with a new infection, the kind of which WE DON’T HAVE. So come, enjoy my cooking, sip from our fingered cups of tea and watch as I give you a lovely slice of banana cake made by my very own hand because there are no threadworms here currently AT ALL. I am sure of it. Probably. Ahem.

So that’s a bit of good news. As for the bad news, it goes like this:

We go away soon in a few weeks’ time and it turns out that one kid’s passport will run out two months and 18 days after we get back, which apparently means that we can’t travel. So we have to get an urgent passport, but you can’t get one in a day for kids, so we have a week fast-track passport option, but you cannot get an appointment to get that started in London, only in Belfast and Glasgow or Durham or Peterborough. And there are no humans available to talk to about this, only an infuriating automated lady’s voice telling you things like ‘go on our website’ and ‘we can’t tell you what foreign entry requirements are’, which is all a bit useless and samey and not really addressing the questions that you have, like ARE YOU SERIOUS? This is a money-making racket, surely? And WHY CAN’T YOU HELP ME IN LONDON?

So tomorrow I will get the train to Peterborough at 7:30am and hope to find the passport office very quickly and then I have a half hour appointment to get the passport renewed, and a week to get it back, and if it arrives on Monday, a week after tomorrow, then that will be the day before we leave. And this is all dependant on whether the passport office person accepts the counter signatory witness-person’s signature because it is a tiny bit out of the border, and that is strictly Not Allowed. So I actually cannot cope with the boring passport drama. Then, later, after the emergency appointment was all booked and sweated over and sworn about and paid for, doubly, because I have a London appointment on Tuesday (TOO LATE) as well, only then did I discover that Cyprus doesn’t even care about the expiry thing. DOESN’T EVEN CARE.

So this is just a giant sucky-ball of despair and wasted money and unhelpful adrenaline. And now we have discovered that we have a mean neighbour who listens out for the children and seeks them out and hisses at them to keep quiet like she is Queen Of The Square and actually, she is not, she’s just a young angry lady who needs to practice kindness. It started on a sunny lunchtime a few Saturdays ago, when they were playing a lovely game of ‘Fishing With Those Old Nikes Tied To A String From The Top Of The Stairs’ which of course made them laugh and get a bit shouty in the most kiddish jovial way, and she came down from a flat somewhere above us and asked Mark to tell the kids to keep quiet, quite politely, because then it was all neighbourly niceties. But Mark was busy watching the rugby with all of his heart and soul and so he didn’t really engage with their fishing game. Fifteen minutes later she came back and have a proper go at him for not telling them to be quiet and he was like:

NOW HANG ON A MINUTE I HAVE BEEN HERE THIS WHOLE TIME AND THEY ARE JUST PLAYING, DOING NOTHING WRONG…THIS IS THEIR HOME AND IT IS THE MIDDLE OF THE DAY SO REALLY YOU NEED TO BE MORE TOLERANT…bit shouty…response….bit angry…..shouting a bit again…etc etc

And so I was coming out of the shower and heard the tail end. She had walked away at that point after this first little altercation and she has since been my Faceless Mystery Woman of Spitefulness and Unneighbourly Gestures. And then a few weeks ago I see a lady giving me funny looks at Waitrose as we were lined up at the counter and I assumed she was someone who knew me from something local to do with the kids. She was returning catering glasses to the shop and she was with her handsome fella who was also looking at me a bit funny and when I turned away Mark was like:
THAT’S THE MEAN LADY! THE NUTTY NEIGHBOUR! THE INTOLERANT CRANKY NOISE-HATER!

And it all made sense. It turns out she knew who I was because I am the mother of the kids she hates! I am the maker of them! The one who started it all! So by extension, she clearly cannot abide me or my womb-consequences in equal measures. She now hisses mean stuff at the kids whenever she sees them and I think she is GAGGING for a street fight with me. And that night, after the party she had hosted in the garden to celebrate her engagement (the reason for the Waitrose glasses return) she left a pile of unopened wine and beer in a big crate for people in our square to take with a sign that said “Help Yourself”. And so we did. We took it all by the light of the moon when we walked the dog late at night. And we feel just a tiny bit vindicated when she walks by the kids with her angry little monologue BE QUIET…I HAVE SPOKEN TO YOU BEFORE…. because we know that she unwittingly became our most neighbourly neighbour of them all when she filled our extra fridge with nice summery beverages.

Here is a photo by Richard Bradbury which is going to go into a book for the Queen, all about kids who live in London. How could anyone not love those faces and knees and associated noises? 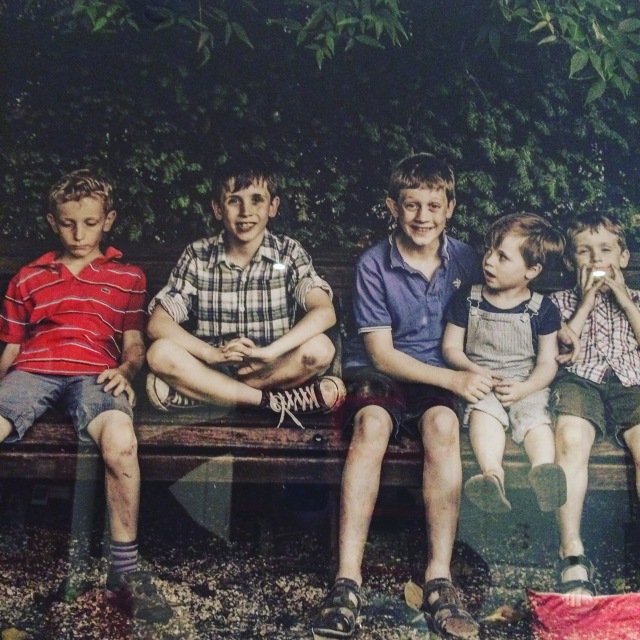 Grandad and Barnaby and Noah at Crockford Bridge Farm. We picked blackberries but they had worms. I have had enough of worms. 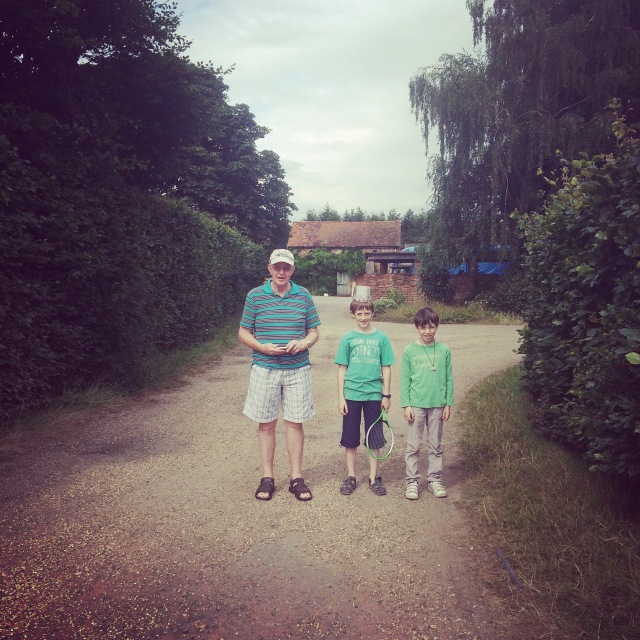 The joy of snapchat filters and the children looking on, wondering why their mother keeps taking photos of herself: 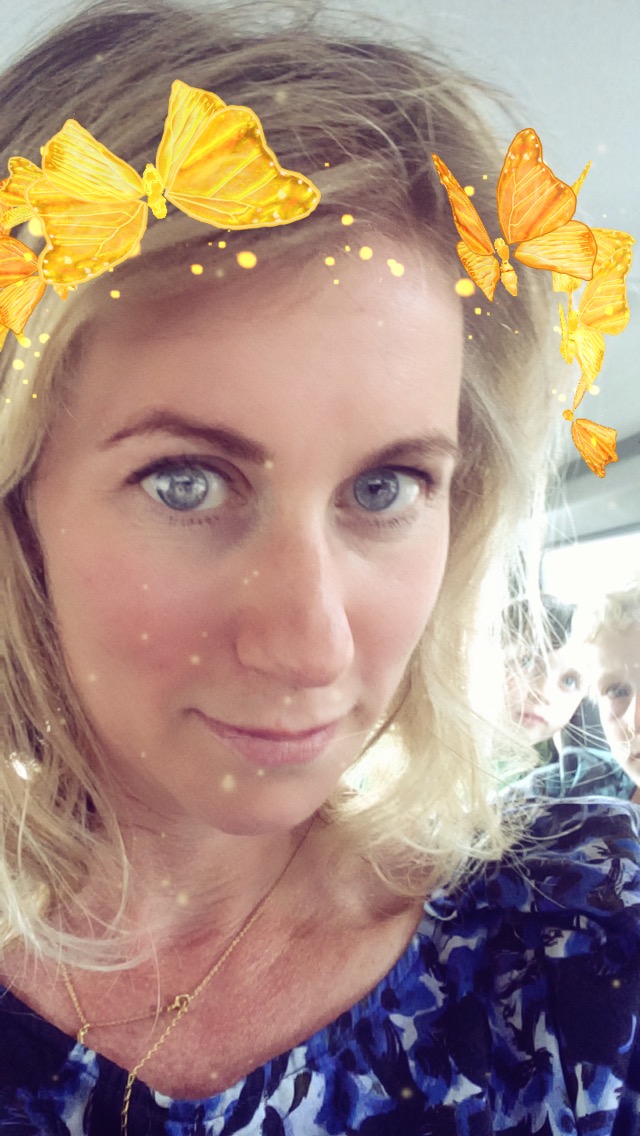 The view from the Sky Garden: 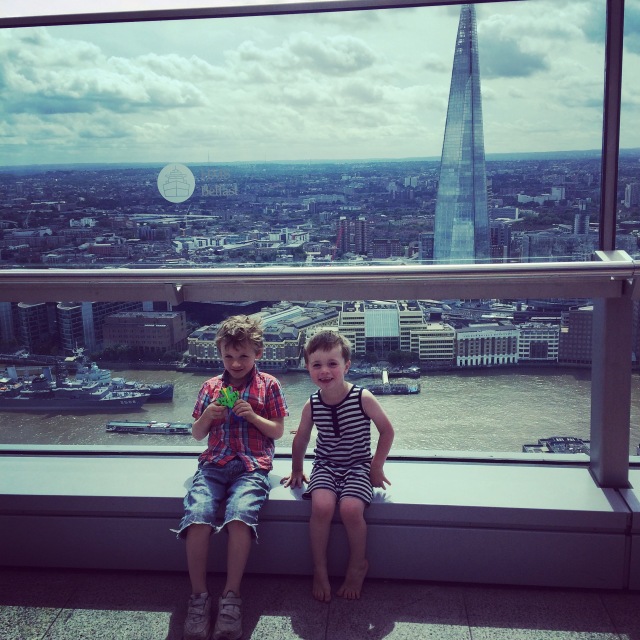 Making plague rats under the stairs at Ham House:

The best is saved for last – face swapping with dad and mum: 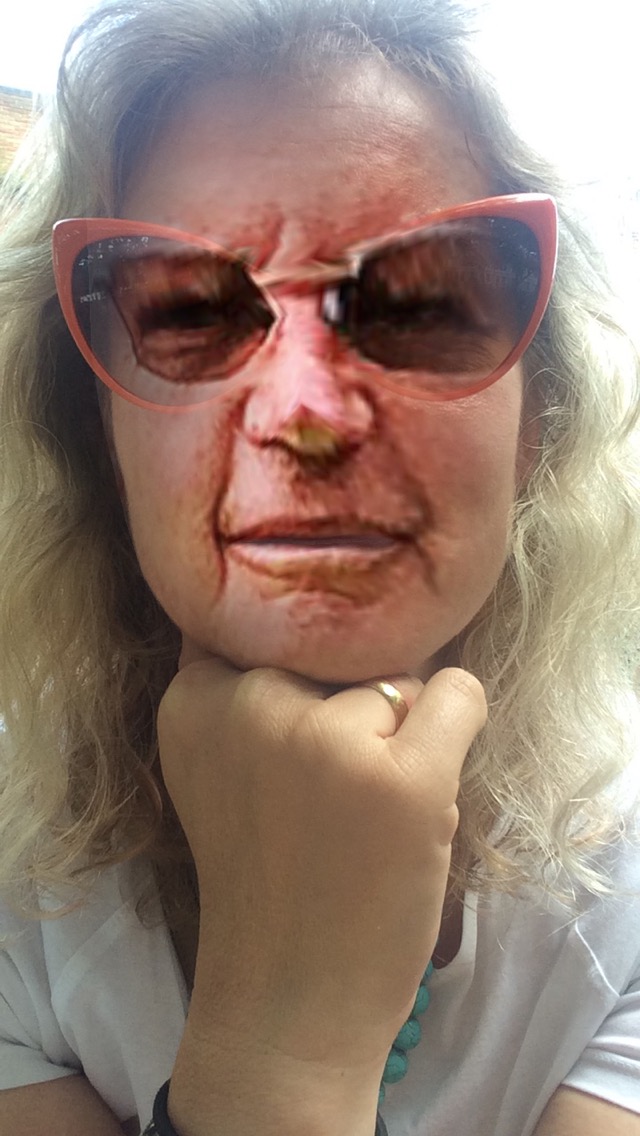 7 Responses to We Took The Wine