Remember last post when I was talking about theoretically being a conspiracy theorist? And how obviously I am not, but if I was…yada, yada, so much yaddering. Well, there is more on that, because of course that tiny beautiful Prince died, which seems so completely wrong and apocalyptic, and it lead me to a further thought about all the people who have been dying this year. And here is my thought:

What if there was someone wealthy and wise and concerned about humanity and who valued culture and comics and magicians and Eurovision, kind of like a Batman for the entertainment sector, or a Richard Branson-type fella who had some sort of handy luxury island (stay with me here…). What if this person made a plan to squirrel away everyone who has been meaningful and impactful in some way over a cross-section of artistic endeavours for a gloomy Year Of The Dead, a fake Year Of The Dead, because it would make us all stop listening to bad music and spending too much time looking down into our phone screens instead of investing in vinyl records and staging Bowie appreciation nights and laughing at old clips of Open All Hours? What if Alan Rickman has been taken away to be fake dead just so we would watch him in Robin Hood: Prince Of Thieves and marvel at his wonderful voice and Kevin Costner’s mullet? What if, somewhere near Necker Island, Terry Wogan and Prince and Victoria Wood and that guy from Motorhead are lying on sun loungers with drinks and sharing funny stories with David Gest about Elizabeth Taylor’s diamonds? Paul Daniels could be doing card tricks and Howard Marks would be taking drugs and Harper Lee would be saying: I TOLD THEM THAT FIRST DRAFT WASN’T MEANT TO BE PUBLISHED. HOW EMBARRASSING. They might well be sharing a chuckle about the outpouring of twitter-grief and they could at last see the youth pay attention to how great the old stuff is. The kids would listen to Sinead O’Connor singing ‘Nothing Compares 2 U’ and wonder at the beautiful lyrics and watch the music video and cry with Sinead and be jealous of her bald head.

It’s just a thought. In any case, I don’t think they are going to come back.

Anyway, that’s enough about sadness and death. Let’s talk about broken ruined things! As loyal readers will know, I have a thing for Tom Ford lipsticks and as you also will know, so do my boys. They are like little naughty magpies, attracted to the black and shiny gold of the lipstick cases, and delighted by the swivelling tube and even more enervated by the squishy pigment which gets spread over carpets and cupboard doors. Friends, it happened again. Otis took Flame and made reddish orange scribbles on our bedroom carpet:

This photo was taken after some exhaustive googling about the best ways to remove expensive cosmetics from cheap carpet. I rubbed and tutted and scrubbed and then gave up because the carpet is pock-marked with unidentifiable patches of green and pink patches anyway. At some point, you just have to give in to the filth and recalibrate your standards. (Mine aren’t very high to begin with, but you knew that). Then Otis did it again, but this time it was my lovely Lipshine in Frolic. It wasn’t just used as a fancy floor crayon this time – Frolic was instead expertly scooped out with fat little fingers and then pasted onto our cupboard doors. There is no more for me to scoop out of the plastic little nub. And Mark says:

I’M NOT BREAKING. THEY NEED TO LEARN TO RESPECT MY STUFF

and then Otis came out of the bathroom looking like this: 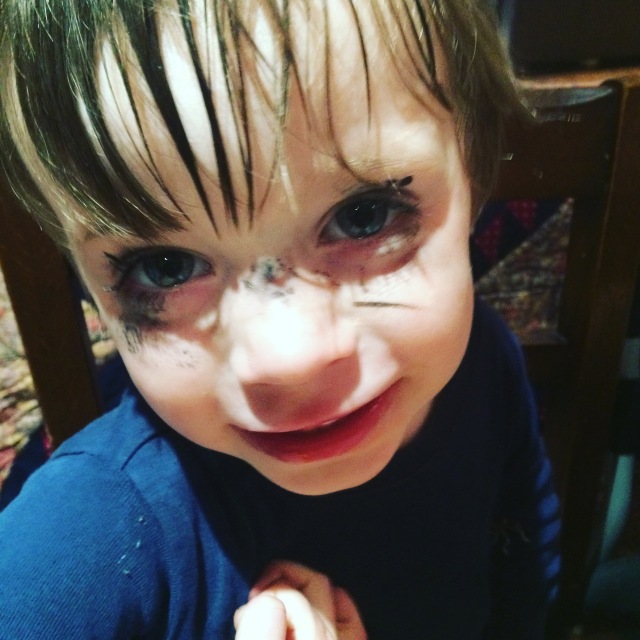 and I reckon I broke.

So he was properly told off and I went to great pains to tell him that touching my things was a big fat NO NO and so he sat at the table and had to wear the TEA COSY HAT OF SHAME:

THINGS I AM FINDING CHEERIER THAN RAVAGED MAKEUP: 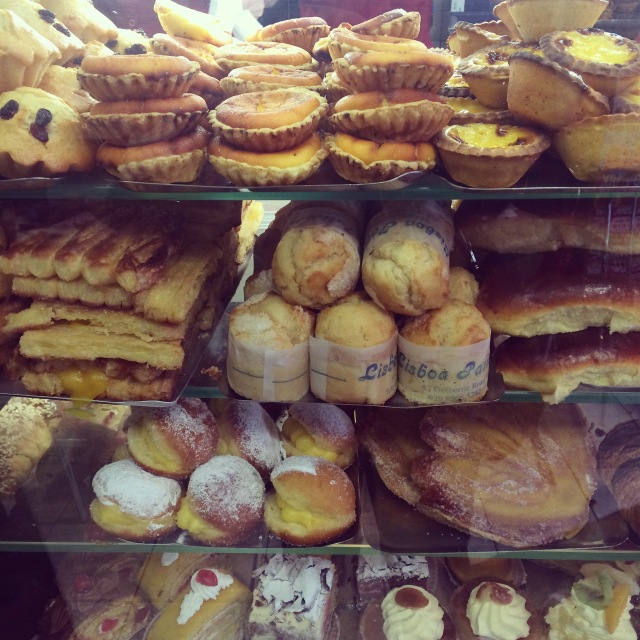 4. Youtube clips of Prince, especially in the rain at the Superbowl.

5. Vietnamese baguettes in the Acklam Road part of Portobello markets – our new Saturday love. Porky and spicy and crunchy and coriander-y. Though the children here are eating £6 waffles with cream and terrible chocolate sauce.

QUESTIONS ABOUT EARS AND A CONFESSION

I will leave you with this. I have a single diamond earring stud because the other one fell off while I was running in the park a few years ago. I often feel like getting one of those ear piercings at the top of my ear, in the curly bit of cartilage. But I have red scaly psoriasis behind my ear. Is it weird to stick a shiny diamond in a place which is very close to my secret skin shame? Kind of counter-acting my twin needs to show-off and hide? Shall I just adorn my blistering red ear-skin anyway, in an act of body activism? Opinions, please.

Also, I went to a parent council meeting tonight and I discovered that sometimes, even though we can be running over time, I like to talk about things that are slightly off topic, because I really like talking, and having other adults listen to me and nod their heads and murmur encouraging words. I think this is a negative trait I should attempt to control and it might have something to do with the fact that at home, my voice is a vacuum, existing in some sort of powerless tunnel of silence, audible only to me. Anyway, I’m working on it.

7 Responses to RIP everyone