It’s been a very long Tuesday, in that twilight zone betwixt Christmas and New Year, where it seems everyone is possibly dead, inside their homes, in front of the TV, or they are on holiday somewhere sunny, but you, alas, are neither dead or on holiday, just eating ham and feeling thirsty all of the time, without any idea of the date.

Mark is inexplicably golfing, in that kind of way where last night, he says “Tomorrow, I’m going golfing” and you say “OH” and then he gets up out of bed in the morning, puts on one of his many Hawaiian shirts and takes off, leaving us all in a puff of exhaust fumes, all wishing we too were sporting unseasonal short sleeved comedy shirts on our way to do some golfing, instead of still here, with a dog to walk and vicious fighting to get bored by. And no one wants to walk the dog, even though they all asked for a new puppy for Christmas.

I’m like “Dudes, you don’t even bother to look after the dog we already have” and they are like “He’s NOT A PUPPY” and they slink off, to the TV, or the iPad, or one of the two new nintendo DS things that I so foolishly bought them for Christmas. There has been a tiny voice of caution and wisdom telling me not to bring nintendo DS things into the house, ever, because they would turn my children into future IT specialists, all pale and unwashed, dorky, with weak arms and maybe some small Dungeons and Dragons models to paint, with special lamps to paint with and general weakened eyesight from the lack of sunlight and bad diet of biscuits. But I weakened, from the sheer exhaustion of five years of pestering and hoping and wishing, and then I went onto CEX, the computer exchange store on Queensway which has a mediumly attractive IT specialist guy with a beard and a beanie but also a knowing little grin, and he said the boys would be fine as long as they went outside sometimes to walk the dog. Well. That’s all very easy to say when you are a CEX salesman who knows how to charm an old nintendo DS skeptic, with your youth and your  beard and your superior knowledge of what non-rugby-playing skinny kids actually like to do, without the terrible pressure of having to walk the dog everyday.

Anyway. I see the error of my ways, and I should have listened to that mean little inner voice who said they would be better off with another massive packet of Lego and a book.

We went to Devon again, because staying home over Christmas is just the same as staying here every day, but with more loneliness and more roasting of meats. So we figure we may as well stay in a cottage somewhere with a pool, do the same things but with an air of ‘holiday’ about them, and muck up someone else’s oven with spilt ham glazes and layers of fat. We had duck, ham, roast beef and lamb. Mark made an apple pie but the jam bits leaked through all over the bottom of the oven and he stuck butter all over the top of the pastry because he likes to do things his way, instead of listening to me. There was no good bread to be found in all of Devon and Cornwall, but the butter, cheese and bacon was ace. Here we are, doing some Christmas morning present diving:

And one of those terrible, terrible consoles:

Otis got a barrel of plastic dinosaurs, which were quite the hit:

And I bought myself Acne boots and Tom Ford lipstick on eBay and gave them to Mark to give me. It was win-win, really, and amazingly, the boots slipped over my massive feet with the extra side-bone like they were made for me. All that secondhandedness wore them in over the difficult parts:

And here we are on the beach at Looe, getting a little bit cold and underwhelmed: 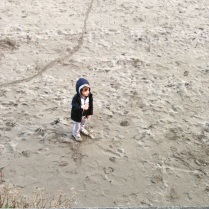 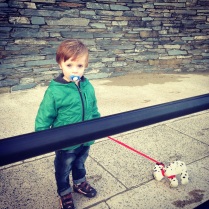 And us in the pubs, eating massive pies:

Before we took off to Devon, we did a bit of pre-Christmas carousing. We had carols in the local pub:

And a lovely night at Quo Vadis with the bookies, where I wore a massive ballgown and a jumper, just like Sharon Stone at the Oscars with her gap shirt. EXACTLY like that. Then I got hot, and took off my jumper, and displayed my furry armpits, which I have been cultivating since summer. Everyone was disappointed to see how wispy and scanty they were. I didn’t take a photo of them though, because I am not yet awesome enough to document my feminist armpit hair, so here is my ballgown instead, on my artful walk home:

Here is Ned at the school nativity play, wearing a red cape and bearing gifts of frankenseen (?). Just look at that annoyed little guy in the star headband:

Mark has come in from the golfing just now, had a shower, and put himself to bed. TO BED! My face looks just like the boy in the star headband right now.

Happy New Year, all of you who are still alive in front of the TV and to those of you warming yourselves in another hemisphere! I’m off to confiscate some screens.