Today is the kind of day where I feel a bit like crying, or a bit like whacking someone around the chops with a handbag. For no reason at all. Maybe something to do with demands on me, or lack of demands, where I feel both pulled in all directions and completely redundant at the same time. Hormones?  Probably hormones. But then that thought makes me sad too because one day soonish I shall dry up like a wizened shell without these pesky hormones, and give up on my mooncup and frequent, hopeful pregnancy tests and my face will become parched and dry like a biblical scroll. Or like unleavened bread. Even a dishcloth that has been drying on the radiator and is stiff and ripped in parts, and smells a bit like cat food. You know?

(On the mooncup thing, I need to tell you all that you should be wary of using it after you have been recklessly chopping up chillies without gloves on. Seriously, take care out there in the dangerous world of domesticity, where it is entirely plausible that silicon-meets-capsaicinoids-meets-your-lady-parts. Also don’t take your contact lenses straight out either. It gets me every time.)

So this boring funk I am in may have something to do with the fact that we are parents of a ten year old and things are getting out of hand. I can do babies no sweat, and toddlers are fine, if a little inconvenient at times, and kids make me annoyed in general but they aren’t that bad, but I have never dealt with an actual prepubescent and it is all suddenly a bit trickier and more serious. We went to see an alternative secondary school for our biggest kid a few weeks ago, and I saw parents who I recognised from baby groups when he was tiny, and we were all pacing the halls of Holland Park School nervously, overawed by it, and thinking about our kids fitting in there, and everyone was really just thinking about themselves going there and what it would feel like because we did all this ourselves not that long ago, and it was kind of horrible. (Not Holland Park School, which was so fabulous that I went a bit nuts for a few days after, telling everyone I met about it like boring overexcited parents tend to do. Apologies, anyone who came into contact with me had to go through the prospectus and were given a blow-by-blow account of my exciting open day visit. I won’t do that again.) Horrible because it signals the end of something and the beginning of the growing up and the growing away.

He has asked to walk home from school on his own, and he asked me this morning for a proper tie, not one of the elastic ones he has been using since he was four, and he has been popping out to Queensway for urgent supplies of tat from Tiger by himself, as well as having a little dog-walking job which generates a whole £2 a week. All good things, which I take to mean we have done an acceptable job of looking after him: the whole point of this parenting gig after all being that they start to diverge from you a bit, and stride out on their own, one block ahead of you and their straggling scrapping siblings, proper tie flapping in their small faces, with year six daily homework straining in their one-size-up school bags. But it all feels a bit heartbreaking. Even Otis has shunned the buggy in favour of his new second-hand micro-scooter, and refuses to sit in his high chair anymore, preferring instead to tip his weetabix into the grooves of the wooden table from the more convenient dining room chairs, just like his big brothers do.

It happens to everyone, I know. It’s just a bit new and a bit odd. And of course the other thing is that I am going to be 38 on Saturday and that feels ridiculous. Like completely absurd and stupid. It came from nowhere! I was about 20, and then I had some Christmases and stuff, and now I am filling in that age bracket on questionnaires which goes from 35-45. And inside, you are shouting NO, I’M NOT THAT OLD, ACTUALLY! Not really! Because 38 looked different when I wasn’t 38. When I was a kid, it looked quite old and middle-aged and people got their hair cut short and they stopped listening to new music and their clothes weren’t very cool. I don’t even think people who were 38 had sex any more. Not in my hometown, anyway.

Here is a black and white series of boy photos to distract you from noticing that I referred to my mooncup and people having sex. Sorry about that. If I wasn’t nearly 38, I probably wouldn’t feel I needed to apologise. GAH

Here they are in Kensington Gardens, looking for mushrooms and blackberries which were not sodden and mouldy on an inset day last week, which was really a day off for Eid. No luck, though a very belated Eid Murabak everyone and cheers for the day off:

And a video of Otis drumming:

On Sunday we had a last hurrah picking raspberries at Crockford Bridge Farm and ate gelato, because soon we will be too cold and miserable for frozen dairy products: 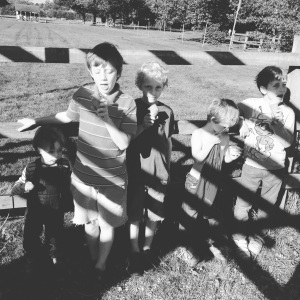 And the children huddled onto Noah’s bed, united by episodes of Max & Ruby: 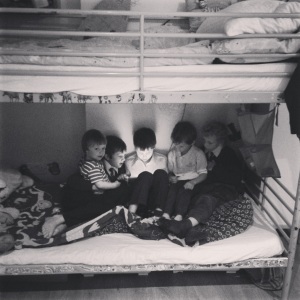 That’s more than enough self-wallowing. Tonight we all have to stay at school for a shared dinner (at 4:30pm) to meet the teachers. It is Casper’s turn tonight, and I am going to have to ‘fess up to his teacher that he has been hiding his homework down the side of his bed in a pathetic and misguided belief that he wouldn’t have to do it if it got lost. Noah has been trying that trick for years now and it doesn’t work. But still they try. Eejits.

2 Responses to I’m Not Sulking