Everyone is a little bit mad with me

The children are furious with me, because I have banned them from any screens today and I am making them sit at the table and finish their homework. The reason for the discipline is because they cannot walk down the road without playing “Who’s Got The Lurgy?” which is a kind of frenetic homemade wrestling kicking violent tag, which sees them running in wide arcs away from each other, and often into frail pensioners or onto the ROAD where enormous vehicles miss them by not much. It is all hijinks and scallywags I say (and bruised old people), until one of the children gets dead, spread out onto the road like so much damson jam with chunky butter all through it. I tell them that being dead on the road won’t be much fun, but still the Lurgy game follows us where ever we go. Any lull, any moment where they can regroup, and BAM they start shrieking and careening all over Queensway/the airport/Marks & Spencers wine department/Staff Only areas, frothing at the mouth and shaming me. So they are in trouble, and they are really mad, and I can hear them plot against me.

Their plan goes like this: At 5pm, I have been invited to watch their Purple Paper Pirate Puppet Show (their alliterative strengths come from me, but not their violent games’o’stupidity), which is apparently an actual show, with Barnaby as Art Director, Noah as Producer, the other two in some sort of overworked and underpaid intern role, where they are responsible for making tickets and cutting out pirate shapes. The tickets this morning were  addressed to me. But now, I am officially Uninvited. They are maliciously very busy coming up with people to invite whose names rhyme with ‘Jodi’ so they won’t have to deal with too much ticketing admin, but I will still feel deeply hurt and snubbed. So they are at the homework table, loudly putting forth names like ‘Rodi?’ and ‘Modi?’, imaginary Preferred Mothers who don’t ban the iPad or force them to write holiday diaries like their Real Mother Who Sucks.

But they don’t know the power I hold. Rodi and Modi won’t come to see the play, because they are badly-named imaginary mother substitutes who couldn’t come even if they felt like sitting through fifteen minutes of unintelligible nonsense, because they aren’t real. There is only me – mean, still cranky about the public shaming, but actual flesh and blood, and the only non-performer in the flat. SUCK ON THAT, SMALL IRRITANTS! You’ll be laughing on the other side of your small faces when you realise no one else exists! This Audience Of One won’t be trifled with! Ha.*

So, there is more. On Sunday, we went out to Whiteleys to look for second-hand books and to get something for dinner. We left the dog outside, the gate shut, water out, etc etc, knowing the dog likes to stand at the top of the stairs and survey the passersby, getting a few pats now and then, barking a bit for effect when another dog or squirrel dares to get too close. We ended up eating at Pizza Express, so got home a few hours later. There was a mean note stuck to our gate: 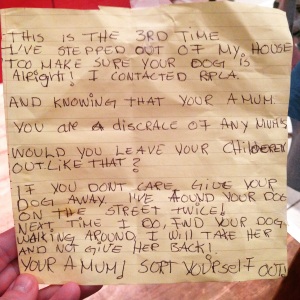 And I’m like WHY ARE YOU ONLY BEING MEAN TO ME? The dog is only 50 per cent mine. There’s a dad too, and he is perhaps also a discRACE oF ANY DAD’s, if you were applying the same standards. So whoever is watching me, all spooky stalker-like, is not seeing Mark. I carry the full weight of the bad-dog-owner burden. Then we had to think who had caught Magic roaming the streets, searching for bins to rummage, not once, but twice. Unfortunately, it is quite a few of the neighbours. They did leave a phone number, which I made clear to Mark that I couldn’t ring, because I would just start crying at the outraged mystery neighbour, so he tried, but they aren’t answering.

So we thought we could fix their spelling and leave the note on the gate, or we could give devil-eyes at all the neighbourhood until someone cracked from the terrible devil-eye pressure, but then Ned wrote this note which should read “No Burglars” but actually reads “nobogls”, and illustrated it with a kind-looking burglar whose arms are outstretched, desperate for a conciliatory hug. It is a work of genius – it is an unintentional shaming note of neighbourly LOVE, peppered with vowels which could mean anything, from “You Can Bugger Off, The Dog Is From Cold Nova Scotia” to “I’m Really Sorry About My Crapness At Caring For Animals”. It has been stuck on the gate since Monday morning. 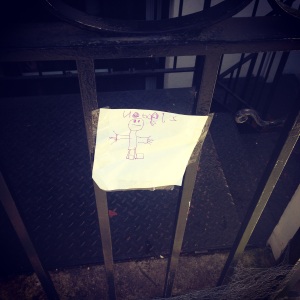 *Sia, Miley Cyrus and Hozier have similarly uninvited. I have no idea what they did to the kids.

3 Responses to Everyone is a little bit mad with me