You can all come back, now. Please.

Look! It’s Robert Smith from The Cure! Really, it is. Both of those tiny, fuzzy, completely blurry little men are actually him, with huge hair and adult-emo-alarming makeup, in a kind of comfortable post-workout hoodie and bovver boots, singing The Love Cats and Friday I’m In Love with the current band line up, and we are primly sitting in the circle at the Hammersmith Apollo, politely clapping along like your gran might do, kind of amazed and overawed because it’s THE CURE down there! On a Thursday night! In Hammersmith! And you didn’t know they were going to play! You thought you were going to see scientific comedians make jokes about scientific things! Which they didn’t, by the way, but that was fine, because they did talk about alchemy and the Big Bang Theory and what it is like to be photographing Saturn and they did some live algebra, which made me feel claustrophobic and panicky, as well as some detonating of things on stage and some terrible, terrible rapping by an American neuro-scientist husband and wife team, who should (quietly) go back to the lab and leave the rapping for the rappers, and we learnt about botflies and sloths and statin drug-testing and watched a clip of a man who spoke space languages, gifted to him by aliens via lasers. So, basically, I know more than you do about science, and now I am REALLY MUSICALLY COOL AS WELL. Deal with it. 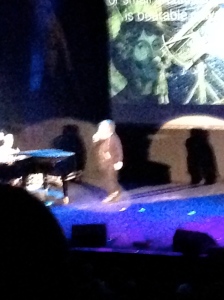 So, if London continues to be so cool, and giving, and full of unexpected treasures, as well as have really good window displays, really great new buses and appropriate seasonal temperatures (more on that later, but I’m looking at you, Southern Hemisphere), then why have you all left? Eh? EH?

We’ve had a mass exodus of friends, mostly scurrying back home to New Zealand, mostly for good, a few are bound for Dubai and one lot to Melbourne. Eight sets of friends, all over a two week period, with the two who have gone “just for Christmas” actually actively  looking for ways to go back for good. Gah. It’s enough to make you think that they all know something you don’t. And so I’ve been a bit lonely, and have had to fill the void with food, sample sales, gingerbread houses, laughing at the children and nativity plays.

Someone should really have taken the dog with them, though, right?

Here’s a manifesto, to convince you all to come back.

Here are street-performer bubbles and the Tate and the Thames and a stretch of sandy mud, just perfect for mudlarking on. Dig a little through that lot, avoid the anaerobic anthrax just waiting to be unleashed, find some Roman relic, and pat yourself on the back for doing free stuff in a free city. Seriously. Cheap and educational. Plus, one of the guys in our square plays football against Stella McCartney’s team, and last week, at the prize giving, Cameron Diaz gave out the prizes at our local pub. IT’S PRACTICALLY A MOVIE SET HERE. 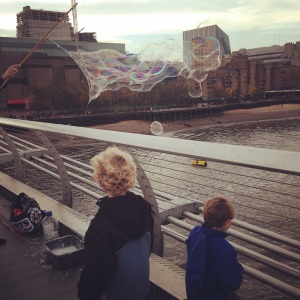 Here are three of us, atop a ferris wheel in Marylebone, after school a few weeks ago, really liking the free Santa visit and the candy floss and the hot chocolate, and wondering if we will ever get into the Chiltern Firehouse to maybe see Cameron Diaz or some other such ‘sleb, because I like that sort of thing:

Here’s the zoo! Not free, but you can buy a membership and hang out there all the time. The sadness of the zoo never really leaves you though. That’s a melancholic scene if ever I saw one – outside the new tiger enclosure, not seeing the tigers.

Luckily the children are shallow and can beam maniacally on cue:

3. You can go to Portobello Market whenever you like and gorge the children on crepes:

They become small, sophisticated men-o’-the-world who can eat international street food while squatting on a dirty pavement. Looking homeless, without socks. 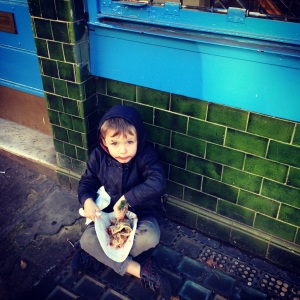 The kids go to school just off the Edgware Road, which used to be a forest where Queen Boudica was attacked, or something. In AD 60, according to my rudimentary googling. WHICH IS REALLY COOL! And then school asks you dress up like a Roman and they give you olives and grapes to eat, and you learn some Roman fighting moves and sing a song about Romans, and underneath your feet are some actual Roman roads. Apparently, Roman Day was as fun and as hotly anticipated as this guy’s birthday:

5. The place where you go and get your Christmas tree turns out to be your great grandfather’s farm, once upon  time.

Yes. This one is hard to explain. But it turns out that Crockford Bridge Farm, just outside of London, where we have been going to for years for Halloween and Christmas and for picking your own strawberries and for days out in the Surrey countryside, is where my mother’s father’s father was born. They owned it, for a time. That weird land/family/ancestry link thing! Imagine the oddness of finding that out. Here are the kids at the farm, writing wish lists for Santa, walking through the (ancestral) forest and visiting him in his warm cabin.

The spicy gingerbready warm cosy Christmas thing DOES make more sense than a BBQ with some crayfish, a sweaty head from the polyester Santa hat from The Warehouse and a sunburnt swim. I’m not knocking a summer Christmas, I wouldn’t dare – but the seasonal appropriateness here is pretty nice.

Here is Ned’s Christmas wish list, dictated by Ned, written out with care by Barnaby. It’s an excellent list. Especially the (real) toast. 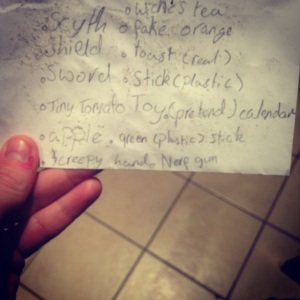 Photos of the kids for a community art project through the school, looking a tiny bit mugshot-esque:

Gingerbread houses from IKEA for £2.50: Thanks be to God, they actually worked this year. No one cried.

My peppermint bark. Ugly to look at, delicious to eat for breakfast:

And a lovely dancing angel at the nativity: 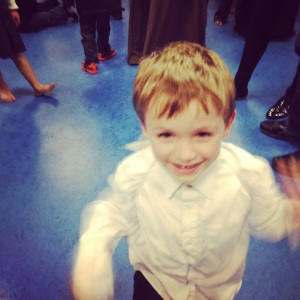 Merry Christmas everybody. You can come back home, now. Please.

5 Responses to You can all come back, now. Please.