Sad Story About Falling Over

Hello all. I am not going to talk about the baby, except to say that it became apparent to me at about 11:55pm last night after the work party and the associated prosecco/brandy/bitters/exploding sugar lump cocktails (?) malarky that the baby is really The Greatest Baby Of All Time. And if you abbreviate that hefty moniker to GBOAT, then you have G-Boat. Which is quite possibly an excellent nickname for him, even though Otis is so much quicker to say. But less meaningful, if you follow.

So. I have had an eventful month, one in which I fell over face-first with the baby in the sling in front of a busload of early morning commuters at a full bus stop and I let go of the dog lead in my valiant attempt to shield the G-Boat’s face from being skinned on the pavement and my nail polish got ripped off instead and there is now a hole in my post-baby jeans and big knee bruises and I admit, I cried. But PHEW G-Boat’s face was perfectly unharmed. And WHY did I fall over at the bus stop with a baby in a sling in the early morning School-Run of Doom, you ask?

The answer depends on your perspective. Now, with a clear head, less anger, time to have processed said events, more sleep in my sleep-bank, hormones a little less haywire, I suppose I have to say that I fell over because I was manically half-running to school with a dog in one hand and dragging a reluctant child in the other, and the broken pavement tripped me up a little and perhaps, my ankle boots with the mid-heel, worn to give the illusion of longer legs (at 8:18am, no less – never let an opportunity to fake a leaner silhouette go by, Ladies) may have been a contributing factor. On the day, however, as I so hissily weepily angrily told the boys – IT WAS THEIR FAULT. And, to be fair, I had had a few days of being the victim of Casper’s new manipulation – the one in which he sits down on the pavement en route to school, and refuses to move. Past rationale for the very public foetal-street-postioning has variously been:

a) He wants to hold my left hand, and Ned is holding my left one. The right one is free, but unacceptable

d) his jacket has slippery shoulders, his bag keeps falling off and I won’t carry it for him

e) I folded a piece of paper he handed me. Folding wasn’t ok

So, in response, he curls up in protest on the dirty pavement in amongst the A40 tumbleweed and mouse carcasses. I try to ignore it and keep going to the next crossing or just out of sight at the next bend, but mostly, he still has not moved at that bluff, and by this point there is about seven people crowded around him, asking him where his mother is, and pulling out their iPhones to call the police, and so I finally give in and and walk back and pull him up by the arm and hiss at him that he will have to go STRAIGHT to the headmaster when we get to school, and then we have to kind-of-run to make up the time and only then do I find him half a block behind, walking with tiny steps and staring at me like Shriver’s Kevin. We wait, watching various traffic light cycles go by, the time ticking on, and he catches up with us and tells me that he walked like a snail because I was rude to him.

So that day, the falling down day, I had had a bit of the pavement sitting and snail walking, and I was consequently raging along in my ungainly half-run pulling Casper along with me, ranting about this awful behaviour, and so I went splat.

But then, you go see Santa, and everything feels ok again.

Here is a much less dramatic and entirely painless autumnal jaunt through Santa’s wood to the wishing tree via reindeer feeding at Crockford Bridge Farm. Sometimes, we are perfectly sitcommable. 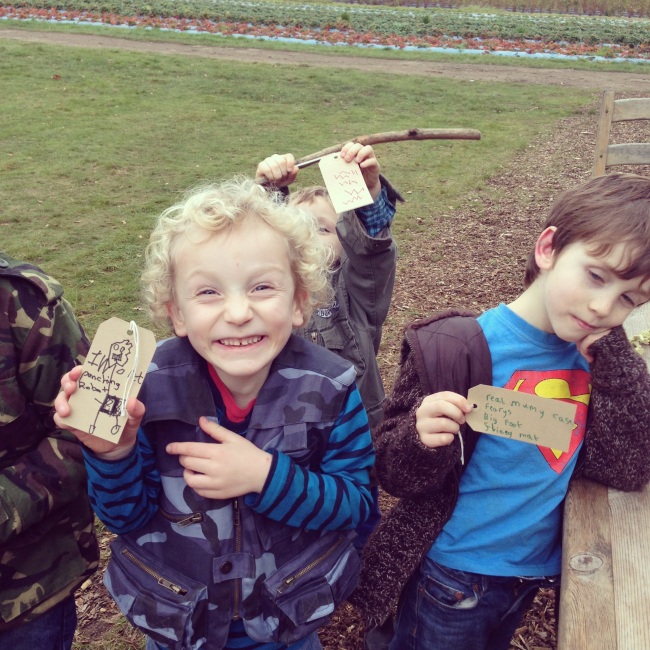 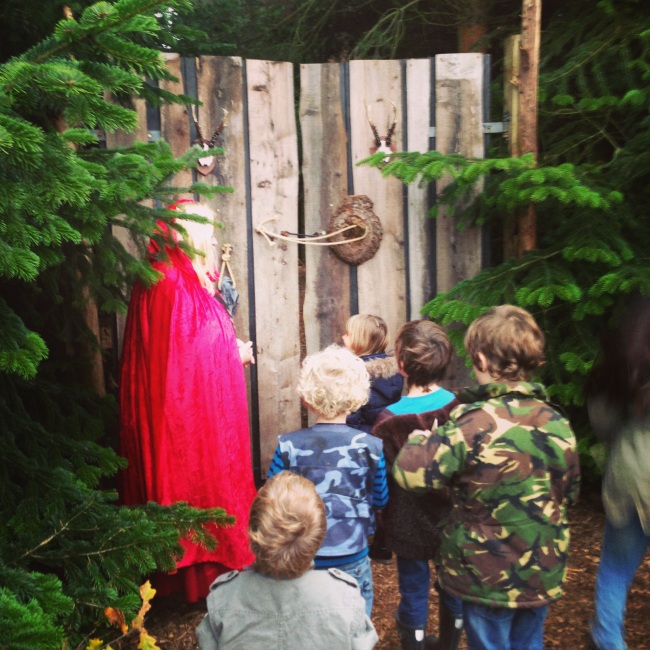 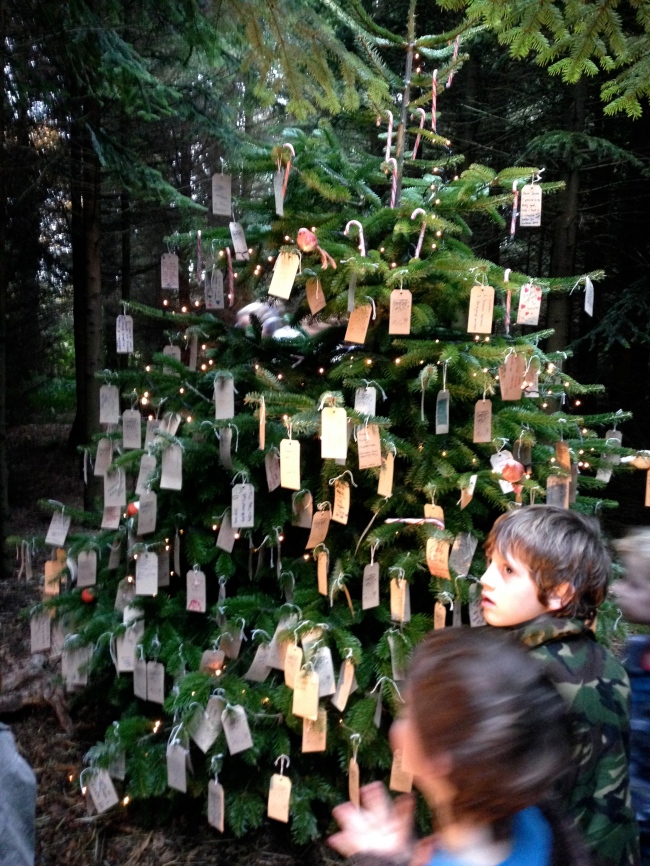 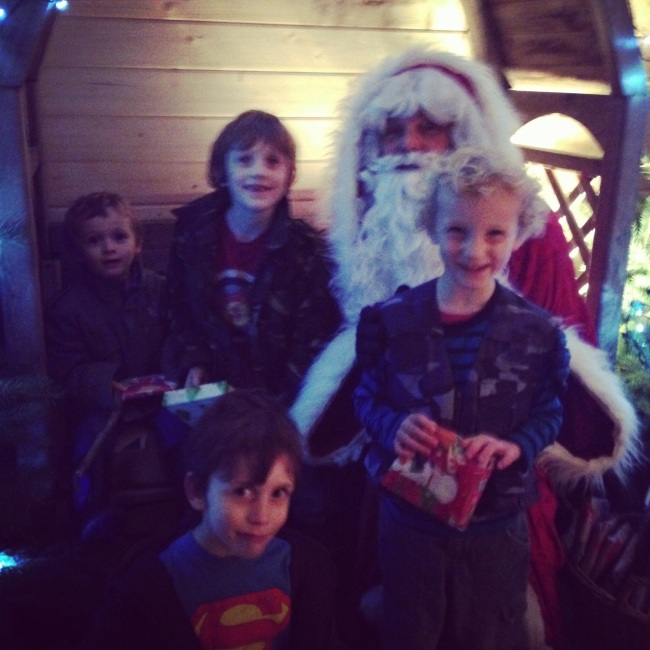 And there was a birthday brunch at The Wolseley with N, who has been my friend since I was 12. She looks as beautiful as ever.

And here is G-Boat, dressed in both lemony/minty knitting from the church fair and his warm bear suit. It’s the Little Black Dress for babies.

This was a mixed bag, I’m sorry to say. I bought Alexander McQueen black trousers for £50, but I didn’t try them on, and so discovered they were unhemmed and ah, don’t fit. Erdem was excellent, furnishing me with sharp patterned trousers and Nicholas Kirkwood for Erdem yellow pointed heels for £60, but Christopher Kane had an hour and fifteen minutes queue to get in and a fifteen minute coat check line which gave me three minutes to look before I ran back to the babysitter, kind of annoyed and embarrassed by my sample sale compulsion. Here is a highly unflattering photo of the Erdem haul: 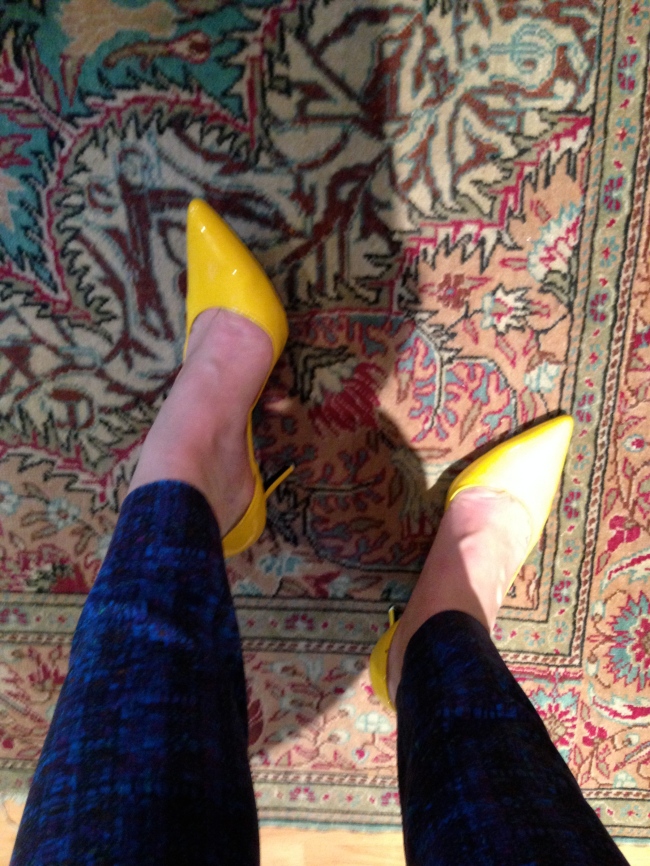 If only I could actually wear them. I blame my sixth toe.

9 Responses to Sad Story About Falling Over