The summer! It’s kind of over! And it has been the most wonderful summer of them all. Today I am clad in jeans and an oversized knobbly cotton jumper and outside feels a bit brisk. ‘Fresh’, say the Brits, inexplicably. Not like juice, but fresh like, cold. Last week, in Turkey, we only wore swimming costumes and bathed in the sea. And only got stung by jellyfish the once.

Anyway, school started back yesterday and already the boys have had homework and already I have shouted at them to “hurry up forget about your shoe coming off we have only 12 minutes to deliver you to your new teacher who FORBIDS YAWNING” and stuff like that. It’s a dark, dark world out there in our state schools. Of course, it is Noah, the most reluctant school-attendee who has been blessed with the Anti-Yawnist for a teacher. He is the one kid who you have to drag out of bed. The one kid who likes to stare into middle distance and unfocus for long periods. And he is aware, unfortunately, that his new teacher is the toughest in Year Two. The kids have been talking – he told me that she was the “griftest teacher in the whole school” which, apparently, upon further examination, translates as “strictest“. So. This should all get interesting.

Here he is, with his brothers, on the first day, in varying states of school-keenness. See if you spot him:

Poor old Noah. Over the past seven weeks of lovely, unmolested holidays where we could do what we wanted, he had a few unfortunate mishaps. Just before we went to Turkey, we were at the Pirate Park (a gated, patrolled, large kid’s park with various areas to get comfortably lost in, with a huge sandpit, water areas and a huge pirate ship sunk into the sand) and he lost the rest of us, thought we were heading home, and so (according to the CCTV footage) wandered out past the staff while the gate was unlocked and wandered around in Hyde Park for 45 minutes while I stayed in the Pirate Park, circling and calling and enlisting the help of staff and strangers to look for my lost kid. A woman noticed him, shoeless (because he had been playing in the sandpit and had taken them off), and wet and dirty, and alone, and she asked where his mother was and he said, quite unfairly,  “she’s at home“, so the woman called the police about the wet, dirty and shoeless abandoned child and we finally got reunited, three police cars and seven officers later.

Because he did this awkward lost-in-Hyde-Park-thing once before (see Policevan! Or Instagram: A Cautionary Tale), it became a matter to be passed on to social services. The police officers were fairly interested in us by this point, and were quite concerned about the number of kids I had with me, and took some time to understand that they were ALL MINE. I felt like I should stay indoors a lot more. Just hide.

Then, in Turkey, Noah fell into the icy mountain river water while we ate our lunch. Here he is, minutes before slipping in to his armpits. 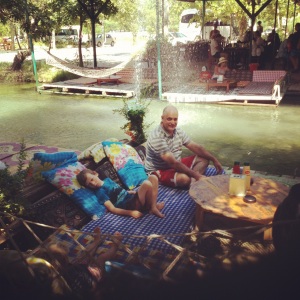 He maintains that the weakling baby pushed him. He also started screaming about ‘THE GLASS! THE GLASS IS CUTTING ME!‘ when he was swimming in our pool at the villa. It turns out he was being bitten three times by a wasp that flew into his swimming shirt. That child is hapless. He also grinds his front teeth to teeny little nubs. And often has a rash. Dribble? WHO CAN TELL?

But. The Olympics. We went to the taekwondo, triathlons, hockey, boxing finals and football. The kids came to a few things, got bored, asked for drinks, spilt them, climbed under their seats, played Angry Birds, cried, wet their pants. That part was a bit painful. But the hockey games were the sporting highlight of my life, and I am totes in love with Mo Farah. We went to Kiwi House a few times,  but it did sadly burn down, in a slightly embarrassing and regrettable kind of way. Our Olympic-ing was the best week I have had in this city (or any other) in my LIFE! What a comedown.

Here are some photos of us being excited outside Wembley Stadium:

And a glimpse of the torch relay:

A beautiful and talented NZ hockey playing Olympian IN MY GARDEN one day after the match against Team GB (!):

And the most excellent game ever, between NZ and the Netherlands. Note the nearly nekkid Kiwi supporter and her peeling tantalising peeling body paint:

And Olympic Park. A triumph. 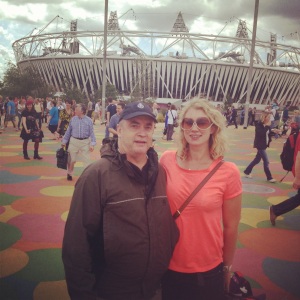 And on and on to sporty infinity. Then Turkey was extremely wonderful. For two weeks we swam and sat by the pool and read and ate turkish delight and drank gin and peach juice and mostly ate wraps. I got swimmer’s ear, which is earache caused by too much fun in the water, which was deeply annoying and a bit babyish. It still hurts, and I am deaf in one ear. I am finding this to be quite useful.

Here is a sample of the daily ice cream delights:

And here are all six of us, standing above the breakwater in Kas harbour: 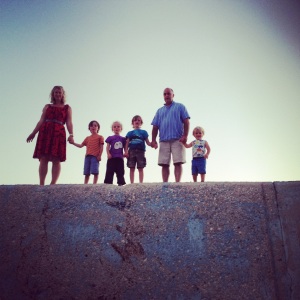 There was an awkward incident at the hammam whereby I got landed with a man-masseuse (*i don’t know how to spell masseuse), who was only wearing a little hammam towel. I was in the buff too. Neradah got the lady-masseuse who was the man-masseuse’s wife but she was wearing CLOTHES. So the Man gave me a good, er, scrub-down and flung me around like a fish on a stainless steel bench and I kept trying to see if my western fair nakedness was causing his hammam towel to rise in suspicious places but I couldn’t look too closely or it would look like a filthy come-on and then I would sometimes try to rub my eyes from the soapsuds and accidentally fling my fingers into his hammam-towelled crotch which was only ever centimetres from my head. Neradah was keeping watch over me in case it all got too much, while she was getting slapped by the wife and sent sliding over to my side of the marble slab by her soapy feet. It was all a bit odd, vaguely traumatic, but mostly very cleansing.

Then we came home at 2am on Sunday, bronzed and rested. Casper started school and seemed to be going well on day one, but I picked him up today and was told he spat at his teacher, had a punch-up with his best friend, refused to go to time out and ended up in the office of Noah’s Anti-Yawnist Strictest Teacher to shame him into better behaviour. This is on day two of a very long scholastic journey, mind. AWESOME. Here he is, before the rot set in: 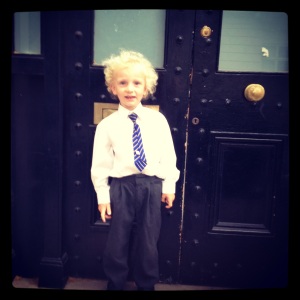 I think this bodes badly. Anyway. Enough about me. How was your summer, North Hemispheriands?