On The Bright Side

Posted on December 4, 2011 by theharridan

I am a little bit thinner. And I can drink prosecco with abandon. I have retrieved all of my unforgiving pencil skirts and other tight stuff out of the dusty suitcase mentally marked “Not To Be Opened For About Two Years” and put them back into the wardrobe, along with M&S huge underwear that sucks in your gut and redistributes the fat all the way up to your boobs. On the less bright side, I have had to hastily shove the maternity stuff into that same dusty suitcase and hide it away. Not to be used just now, anymore.

Anyway. Here are some things I have learned.

1. When someone tells you that they have had a miscarriage, do not say the following:

a) It was really a blessing, when you think about it, because you are about to fly to New Zealand and it would have been so uncomfortable to do that while pregnant;

b) You shouldn’t have flown. I was going to say to you, when you said you were going to fly to Morocco, that that was a bad idea; and

c) Ah well, there must have been something very wrong. It’s Nature’s way, don’t you think?

These things are a bit awkward and slightly embarrassing for all concerned, once they leap out of a mouth and hang limply, forlornly, in the air. I think, when faced with the conversational topic of a miscarriage, that it is best just to express that you are very sorry to hear it. Listen to the story, if it is offered, then perhaps give the lady a little hug, flowers if you must, a card, cash, whatever. Just a thought. But, please, none of the above Sentences Of Shame.

So, in the aftermath we have decided to go out lots and make ourselves overtired and a bit cold-symptomy in order to soak up some northern hemisphere pre-Christmas festive cheer before we board that Emirates Flight Of Despair and Sadness. A list of going-out-shenanigans:

1. Dinner with our excellent architect friends at the Dean Street Townhouse, where we ate so much rib-eye steak and bearnaise sauce chips and red wine and 17th century pickled grapes and devilled eggs that we staggered home and had to be a bit sick. Which is a bit shameful, really, and a bit gluttonous and deeply, deeply, unstylish.

2. The Shepherd Bush Empire for a nostalgic trip amongst portly New Zealand men in their 40’s to listen to the soft-rock legend that is Dave Dobbyn. We arrived at 8, and heard he wasn’t on until 9:15. Panicky looks passed between us because it meant we had to survive on one G&T for an hour (antibiotics for me, driving responsibilities for him) and we had to chat for one hour and 15 minutes to each other, looking lively and happily married in case we saw someone we knew, or we got hit on. Luckily, in through the door bounded my brother’s wife’s sister’s family, whom we hadn’t seen since 1999. PHEW. Then we got a parking ticket. But Dave was excellent, and hobbity, and made us sing loud student-pub-songs all together. It made us a little bit sad for home.

But there were very nice cinnamon pretzels (see above) and the children cracked a few smiles. Noah poked a lot of tongue, which got boring for us, but not for him. 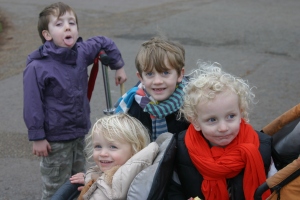 And a two minute heinously expensive ride which made Casper cry.

(Gratuitous shot of the baby, who is still resolutely good-looking:)

4. Out on Friday night to Erin’s 40th birthday. Erin is so good-looking that I want to kiss her face. But I didn’t, I just drank the prosecco instead, and I got louder and MUCH MUCH FUNNIER as the night wore on. I would like to state that I wore a vintage home-sewn dress with a very tight ebay YSL belt which usually makes me feel a bit carsick with the pressure, but that it fitted rather nicely, and I didn’t feel ill at all. I plan to get thinner and thinner until I arrive back in New Zealand, and I will be so thin that the customs officials will swoon and high-five me. But, I digress.  It was in a private room at a restaurant in Portobello, filled with charming bankers and Germans and Scots and French and South Africans and even the Italians. It was ace.

5. Tomorrow night we are off to Chez Bruce for Neradah’s birthday. She is also thin, thinner than me, and makes excellent cakes and brownie. She has raven-black hair and a baby called Fox.

6. Last weekend, Mark spent all Sunday evening at a cage fighting competition in deepest Croydon. He said it was fun. I am baffled, and extremely pleased that the invitation didn’t extend to me. Apparently there were not only women dancing in the cages between fights, but also some small kid. Hmmm.

I have run out of outings to write about now, but this is mostly because I have a lasagne in the oven and I can smell it and that means it is about to burn. I am sure we have done more stuff, but it all has to wait. Until next time, then. But, in the meantime, we are fine, thanks for all of the lovely comments and care and stories shared. xx

6 Responses to On The Bright Side