Oh man, the weekend has been so spectacularly horrible that I can only stand to recall it in severely edited short cold sentences.

1. I had to go out in the evening three times IN A ROW.

2.I went to Farringdon to have some drinks with ex-work colleagues. (I had a job about 6 years ago, ok?). I learnt that the office has since been demolished, and they found a 14th century anthrax pit underneath. Thats probably why I have eczema.

3. Only one man took an interest in me at the bar. And he was daggy.

4. The rugby was on, so Mark stole away for the whole of Saturday afternoon. Which meant I had to take all four of the pesky kids to a birthday party in Hyde Park. The Baby was inexpertly dressed by a hasty Mark, and had no shoes on, and no jacket. The big kids were so horrified that the majority of the six year olds at the party were girls, that they took themselves off into a bush and poked everyone with sticks. There were tears, mostly from the soft European kids.

5. We got home at 6. It was cold, and we had no key. Mark had the key, in his pocket, in a pub in darkest Acton. We went to Whiteleys to get warm, wait for Mark, and eat pizza.

6. Casper went mental, and screamed for Mark. I thought he would stop. He didn’t. We ruined the pizza-dining-out-experience of about 15 people.

7. Casper ran away, and the security guard found him, and asked me if that was my fluffy-haired little girl. I said yes.

8. Casper kept screaming, and screeched that he needed to do a wee. There were no toilets in the pizza restaurant, so all four of us had to haul arse to the end of the shopping mall. When we got there Casper said he wouldn’t go to those toilets. He sobbed. We went back, lost Casper again, found him again, teetering near the escalators. We sat down. Casper started weeping that he wanted to go back to the toilet. I said:

“Too bad. You’ll have to wee in your pants, fella,  because WE AREN’T GOING BACK TO THE OTHER END OF THE BLOODY MALL.”

9. He refused to eat, and ran off again.

10. Mark called to say that he was caught talking on his mobile phone by the cops, and lost 3 points on his licence.

11. He forgot to come and pick us up, and just drove home instead, and so I demanded he come out again, but then I fled the pizza restaurant, and he arrived when I was gone, and I was stuck outside our flat in the cold, with shrieking children, way past their bedtime, and no key again.

12. Sunday I was shaking with post-traumatic stress disorder.

13. Monday, a phone call from school. Noah’s bottom exploded in the lunchhall. Please come and pick him up as quickly as you can. He will need a bath.

It was all so awful. Here are some photos to cheer us all up.

Noah, he of the Squirty Bum, dressed as a Victorian boy on a longboat in Maida Vale: 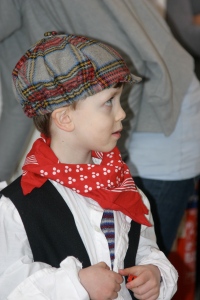 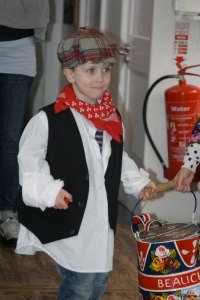 Noah, again, cutting strawberries, in a photo destined for school to show the teacher he is Improving His Small Motor Skills: 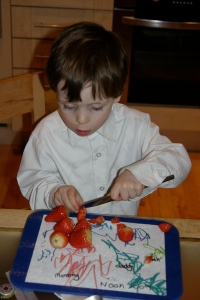 Aaaaaand Barnaby, who makes fruit salads in an OCD fashion: 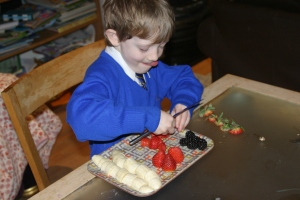 The Baby, who is never, ever clean: 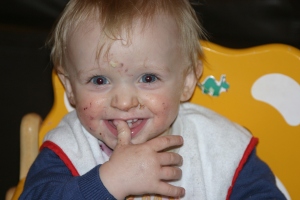 A spooky school photo of the eldest pesky kids: 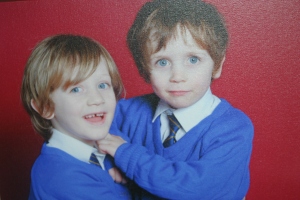 And Afghan biscuits, baked for the Japan Fund. HOW good are they??? 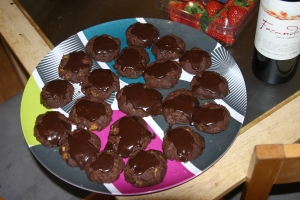