It turns out I never had pneumonia, nor did I have consumption. My self-diagnosis was a little off the mark. I have a lung infection. I am nearly better. Unfortunately, Mark has it now, but he is *sicker*. You know how that goes. I am glad I get to live a little longer. I vow to shout less, have more children, own a rolex and read better novels.

Speaking of novels, this is the week of Two Book Clubs. Which is QUITE ENOUGH of hasty reading, and quite enough of book club liquid refreshments, and enough of dietary complications. Post last post, of course, I was awash with vegetarian options, and I thank you for it. Never before have I been so enticed by non-meat treats! What a deluge of pastry and cheese! I looked at all of the suggestions, and then went back to the Source. (The Source being that thick-tongued, irritating, baby-naming-incompetent Jamie Oliver. Voices in my head kept telling me to do it.) We had his macaroni cheese (or, more correctly, we had scooby doo-shaped pasta and cheese owing to macaroni-buying-fail) and truth be told it was all a bit average. It failed to reach the giddy heights necessary for bookclub cookery because I left out anchovies owing to my 33 year old fish phobia. It was, frankly, missing that necessary umami depth. More parmesan may have fixed it, but I ran out of that in another grocery fail. There was green salad and Gail’s olive bread, which at £2.99 per baguette is wincingly, embarrassingly expensive, but good all the same, and the baby likes it. Then cake, made with aubergines, because you KNOW I am fond of vegetable cakery. I am like a KitchenAid-sponsored witch with root-vegetable-magic-ways.

That they all turned up when I had already made very good progress into a lovely bottle of Monowai pinot noir, at, like, 8:45pm (GASP! That’s nearly thinking-about-bedtime-time in my house!) so by the time dinner started, my tastebuds were lulled into a sort of sleepy numbness, and I was beyond caring about the book,  is a topic for another post. Ack, anyway, who cares. It was fine, and I now have an enormous vegetarian repertoir for next time.

So, today was going to be a love story to London, because before I was in a very happy mood. But I have since had a fight with the children who have been doing naughty things in their bedroom. Specifically, stealing my lipsticks out of my bag and drawing on the walls with them. Pink Dusk has been broken and hastily smushed back onto the case. Ginger Fawn has had the lid dissect it in two. Luckily, True Coral has been unmolested, because it was HIDING in another bag.

How do you attach a broken lipstick stalk to the tube again? I feel it in my waters that there is a way, in the same way that I know you can do clever things with white wine vinegar and baking soda, but the details escape me. I feel like if I lit Pink Dusk with a match, it might melt back together, but then the rational part of my brain tells me that that would be a MENTAL, self-sabotaging thing to do.

So. I asked the bad kids why my lipsticks were MURDERED. They considered the question, then replied

Which stumped me a bit, the angry wronged one, because then I reasoned that they are a tribe of feral little boys who generally lack good judgement. The answer, as always, is Move Your Stuff Up High.

I am late to get onto this particular bandwagon, and what else can really be said about a magic hair wand that makes you look expensively groomed and shiny and elegant in about 4 minutes? This, coming from me, who has fluffy hair that looks like this: 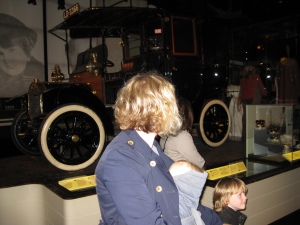 But now I have newsreader’s hair. No pics yet, as the battery ran out on the camera. So just imagine me, looking a bit tidy. Which I know is a very hard thing to do.

Ok, so we don’t have beaches here, or summer, or pohutakawas or people walking around in jandals and vests with sunburnt noses and new freckles, but we do have lots of Christmas Things To Take The Children To. The Marylebone Lights thing was on Wednesday, and there was fake snow, a very impressive Santa, and elves who gave the children plush monkeys. Then on Saturday, the boy’s school all got tickets to gatecrash a BNP Paribas Christmas thing At Somerset House which was primarily for their employees and their kids – free ice skating, free sweet counter, Santa, presents, cakes, face-painting, etc etc. It was ace. The children were really very bad at ice skating, but there was no blood. PHEW.

Next week it is the Connaught Square Christmas thing, and we have the Selfridges Grotto to line up for. Not exactly the same as swimming with dolphins and picnics on the sand, but not bad, either.

Gratutious Shot Of The Baby (who, incidentally, now walks): 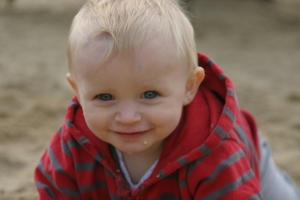