Last week, I had a hair cut. My lovely indiscreet gay Irish former-ballet dancing stylist with teeny tiny hands and a very smooth forehead confirmed that indeed I do have a patch of grey hair at the top of my head on one side only. Then he coloured it all in a lovely shade of yellow and now I am a grey-haired woman in an expensive Aveda disguise. And while he talked to me of such lofty topics as:

c) his mother’s botox overdose (think Quasimodo, apparently – one eyebrow at the top of her head, the other falling down, the bridge in between collapsing under the weight of all the frozen muscle);

he also let it slip that he is the Principal Blow Dryer of a tall, well-proportioned lingerie-designing Australian model with long chestnutty hair (made from the castoffs of poor Russian flower sellers) who lives in the Notting Hill ‘hood. Now, as it turns out, I am married to her builder, and we now share the same teeny tiny hairstylist. So I am PRACTICALLY HER. So close, and yet so far. That is what you get from living in Central London – whiffs of fabulousness. And this is very important, because mostly, I get by on whiffs of hastily wiped bottoms and baby sick. A little bit of stylishness goes a long way.

The Kind Of Thing That Makes Me Cry #1

Last weekend, that warm and sunny springtime aberration, I made a cake to take to Barnes in order to share the message of Vegetable Cakery. There were two shiny, purple aubergines in the vegetable drawer and they were practically begging to be transformed into cake and so I got up on Saturday and got to work. Mark had a sleep-in then went out to a meeting, Claudia the Cleaner was scrubbing away, the children were intermittedly hitting each other/watching TV, the baby was staring at his reflection in the oven door. My cake came out broken and a bit stuck to the sides, but as it was made almost entirely of dark chocolate and, er, aubergine, it smelled very good indeed (and drowned out that vaguely vomity smell of the vaccuum cleaner). It was put out of the reach of the still-pyjama-clad children and I went around the house ranting a bit about getting to Barnes on time.

I had a shower, made some hair/animal hybrids, tidied up the room in an effort to fool Claudia then went into the living room. There was my cake, my former beautiful Vegetable Cake, which had been drowned in a small cupful of water by Noah and Custard, both of whom had wet cake all over their faces. The cake had a watery moat. They were eating the bits that melted off and went floating off in the moat. I wept. 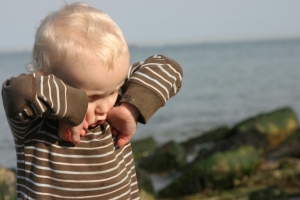 They looked sort-of ashamed when I continued to sob, and slunk onto the floor in a dramatic-movie kind of way. But then they got bored and went off to unroll all of the toilet paper to get to the cardboard tubes. SIGH.

Anyway, I have to go make lasagne now, because it has gone all wintery and we need cheesy carbs.