It occurred to me on the weekend in a moment of flashback that Custard – platinum blonde, fluffy, pale, and ancient-looking –  is a spooky spitting image of a man who used to come into Titirangi New World when I was a checkout girl there in my first year of university. He was a very old man, with long, polished fingernails, the worst comb-over than humankind has ever seen, and I think I can remember him wearing badly-matched foundation that caught in his wily eyebrows. The combover has to be explained – his creamy-hued remaining long strands of hair were combed up from the base of his skull, plastered thinly and evenly over the back of his head, over the top of the scalp and then met in the middle in between his powdered eyebrows in an arrow shape. Sort of like a pointed superhero skullcap, made of his own ancient hair.  Among the supermarket staff it was rumoured that he was the painter of those awful black velvet paintings of bare-breasted sultry Polynesian women that were once to be found in very bad-taste homes, then to be found in ironic kitschy cafes and bars. We didn’t believe it – not really. But then Titirangi is a funny place, and the supermarket had a few other customers who were worthy of note – one being the chain-smoking short woman who had 15 children and was running a successful international baby-wear company from home (now supplying Harrods) and the occasional sighting of some famous-in-NZ soap star/band member on his/her way to Piha.

Anyway, this weekend, I thought of him, and realised that Custard could have been his lovechild. 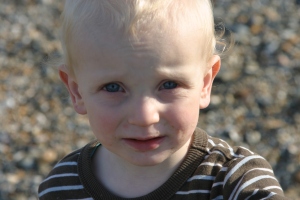 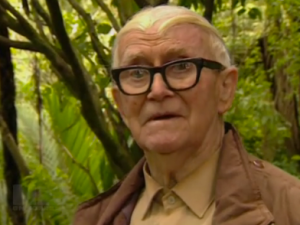 And it turns out his name was Charlie McPhee, he died in 2002, and he did indeed paint lots of quite brilliant, politically questionable velvet paintings as quite a lot of googling revealed.

Tell me, could Custard be the reincarnation of Charlie Party-Boy McPhee?

And here is the Dusky Maiden:

And that, Dear Reader, is what I have done today – watched a documentary on velvet paintings in an effort to find a shot of McPhee to prove my hunch that I gave birth to his doppelganger, occasionally stared into middle distance, and googled quite fruitlessly. As well as made a lasagne. And ate some cake.

The weekend was hardly more productive – on Friday night I was persuaded to venture into Acton, and was persuaded to have a few (ahem) glasses of Prosecco, and before you knew it, I was telling the bar staff they were very handsome and was telling Mark’s assorted gang of business partners/contractors/accountant and mechanic etc, etc about how old I was when we met, and how much my Alexa cost, and other better-left-unsaid tales. I was AWESOME! And did that thing where you look at yourself in the mirror of the loos and kind of grinningly chuckle and tell yourself you are very funny and beautiful and best get out there to share more deeply private things about your marriage, before smearing on lipgloss that ends up near your left earlobe.

Does anybody else do this? Needless to say, I am in no hurry to get back to Acton.