Posted on November 9, 2009 by theharridan

Today something really really exciting happened. Something that I have been waiting for, with the patience of a very patient person. It was not the visit to the antenatal clinic, although that was fairly good, as I am healthy and the baby has a nice normal-sounding heartbeat, nor was it the early-morning visit from the Nutty Australian Entrepreneur which ended in a hormonal cry (that was her, not me). It certainly wasn’t the behaviour of Custard, who has become quite wicked of late. This morning he stole Barnaby’s lunchbox and took off all the wrapping/foil, threw most of the contents onto the floor underneath his highchair, which is always a bit sticky and has hardened lumps of various foodmatter which no amount of nail-scraping can get off, and then he attacked Barnaby’s egg. The egg thing was a bit of a problem because a) Custard is mildly allergic to eggs (hence the undying passion he has for them; and b) Barnaby is obsessive compulsive about many things, and the pristine state of his boiled egg is one of them. So even though I had boiled the egg in Genius-Prepared-Mother-type goodness at 6:45am, I had to make another one that did not have little baby teethmarks all over it. While I was damage-controlling the lunchbox crisis, Custard took dry cereal into our bedroom and scattered it all over our floor with all the thoroughness of a farmer sowing seed over a vast recently plowed paddock. (Forgive me, I am a recovering FarmVille saddo).

So Custard was not the Good Thing that happened today.

The Good Thing is that Mark came home with a new jacket, and in his post-spending euphoria, he went through the hallway cupboard and chucked out some of his old jackets. And he came to The Big Bad Black Bomber Jacket, a particular piece of clothing that has been a source of dramatic marital discord over the years, and he sighed, and he looked at me, at the jacket, and then, with a resigned air, he tossed it onto the charity shop pile. And my heart did a little dance, and I felt so happy, but calmly adopted my poker face and said not a word. See the jacket below: 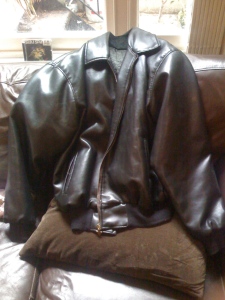 The jacket is slimy, rounded, puffy, and sort of looks like an Eastern European gangster called Boris co-owns it with a 70’s handlebar-moustachioed pimp called Wayne. It has elasticated fabric bits around the sleeves and the hem and so fits my dear husband all snug around the belly. The shoulders are dropped, so he looks like a big round rehydrated raisin with short little legs poking out. It is like a very unattractive fake-leather couch that squeaks and holds dirty little secrets.

Mark became the owner of Boris & Wayne’s co-op jacket when a man pulled up in a car one day and asked him for directions to Victoria station. The man then gave him a convoluted, charming, bonkers story about needing to get to a wedding and having to off-load some Italian leather jackets as the wedding party did not need them anymore and by jove! Would Mark like to see them? By jove, Mark certainly did – and he was most excited to see that they were going to be sold not for £500 each, but £75, or £120 for two. What LUCK!

So, Boris & Wayne’s jacket found itself coming home to ours. And had stayed in the hallway cupboard in various flats, as I was so horrified by it. But marriage being what it is, the more I protested, the more Mark was determined to keep it. There have been dinner-party polls, vaguely tearful begging, screechy arguments, defiant donning of the jacket in temperate weather to prove a point, and near jacket-sabotage on my part. But today, we get to say goodbye.

And on that triumphant note, here is a photo of my beetroot cake. Although it tasted quite nice (a little bit muddy, but nice) the day after, this is what greeted me when I opened the oven door after waiting, excitedly, for what seemed like hours: 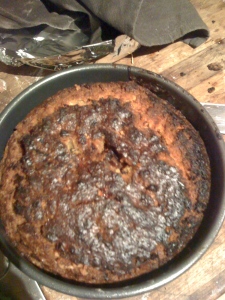 This entry was posted in Uncategorized and tagged baking fail, Custard, leather jacket. Bookmark the permalink.