Today, this morning, I ran my second 10k race and I was pretty slow and I totally did a torrent of accidental wee at the end. The others were supposed to watch me coming into the finish line, but they had some domestic trouble with sandals, and so they were late, and by the time I found them, I was pretty much dried up. Those tight running pants pride themselves on wicking moisture away, and I think I know what they are getting at. Then when I got home, I found my toenail, which I had been furiously growing in an effort to impress the pedicurist Vietnamese ladies down the road, instead of horrifying them when I ask them to paint my tiny bleeding stubs, had grown indeed, into a sharp point, and it had attacked the other toe during the race and there was blood everywhere in my running shoes. And by then, I smelt like an old public toilet. The moral here? I don’t know. Wear sanitary pads all the time in case your bladder decides to give up working at inopportune places? Don’t pick your feet into a scabby mess, but if you do let your feet go forth and grow like a wild dead-skin-and-curly-toenail-garden-of-despair, then occasionally prune those gnarly edges? Don’t bother entering races? Stay at home and drink tea. But, you know, it isn’t all about urinating in public. In the light of my post a month or so back, when I shared the true horror of having small children go apeshit on public transport, here is a photo to prove that my children can indeed sit down calmly on a train and not pull anyone else’s hair. In fact, they look shattered, which is what a week doing serious learning about stuff at school can do to a kid. They look positively forlorn: 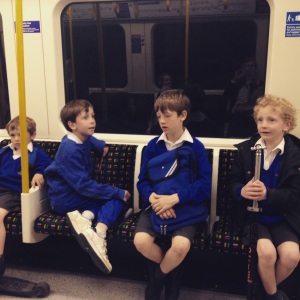 Again, with the kindness and picnic-y brotherly love:

And here they are at the local skatepark, which is where we like to hang out for a bit on a Saturday on the way along the canal to Portobello for crepes and hamburgers. They are scared of the big cool skaters, and you can see them slyly watching the big teenagers with their shirts off and looking cool, and they are wanting to be them, and wanting to be so cool and assured. And then one of them starts a game of frenzied tag, and they forget themselves and act like dicks again. It is funny and sad and sweet to watch.

At the top of Portobello they have a funny little newish foodie space, with tables and chairs and pigeons and stalls which are mostly pretty good. Everyone in the family except for me gets a boner for nutella crepes. Even that poor baby. See him as he takes a rare, unguarded moment to think of his baby teeth and his bad mother who knows that sugar is poison, but gives it to him anyway: 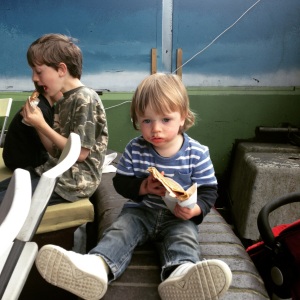 But you stick a filter on everything, wear girl’s stripy tights and some adidas trainers and the pain all goes away:

Yes? Yes. Who needs teeth anyway? We hadn’t been to A&E since Otis got his front tooth smashed back into his upper gum in a hotel forecourt in Wales, and other than needing help with the psychological shortcomings of our children (we have been attending seminars on fixing your children who are a bit nuts, to paraphrase), and a tiny bit of vomiting a few weeks ago, we have been all pretty healthy and unscathed. But then there was this little number – Ned flicked a piece of metal which was attached to a string of  rubber bands into his forehead, requiring stitches. It was rudimentary weapon fashioned by Noah, who had been swinging it around narrowly missing the telly, and then Ned got hold of it and it there was much screaming and blood. Everyone said “Oh, you must have been so upset!”and I look back and think, not really. I think you get a bit used to physical damage and trauma when you have a bunch of kids, and you know they will heal over and scab up and scar but they will be ok.

Here Ned is, just before the bruising came down into his eyes making him look like Vincent in Beauty and the Beast, not bothered, having a ride on a spinning teacup and feeling awesome.

And all this leads me to Mark, who had a birthday yesterday. Ned wore a Jean Paul Gaultier-esque bondage homage apron to help me bake Mark the most excellent Nigella honey and chocolate cake ever, although the icing split and took on that curdled sick quality. But black and white forgives a vomitty surface, and he didn’t mind. Look at the happiness on his slightly grizzled face! 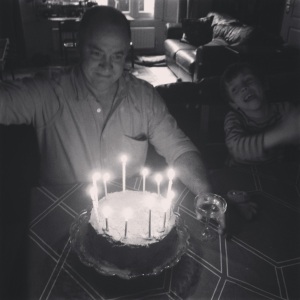 He is like YAY someone cares about me and YAY tonight we are going out and we don’t have to put the little buggers to bed! That’s all it takes really, a reminder that someone loves you enough to build a cake (as my grandmother would say) and that someone will take away the drudge of an evening. And so he spent the day indulging in his newest, expensiviest hobby, the excruciatingly uncool sport of archery. He spends lots of time reading archery magazines, and has joined an archery club, and he thinks about bows and quivers and that kind of embarrassing shizzle. And he watches “Arrow” on Netflix and it breaks my heart, because the guy wears a Robin Hood-updated-for-modern-times crap outfit and he bothers to kill people with his stupid bow instead of just shooting people, which would be quicker and more accurate, but I am trying to be nonjudgemental about it all. It could be lawn bowls, I guess.